The Texas House has 102 Republicans among its 150 members, and we started this week's survey of our political and government insiders by asking what the numbers will be after this year's elections. The biggest bunch, 29 percent, predict Democrats will pick up 6-8 seats, while almost as many said 4-6 seats and an equal number said 8-10. Put it this way: 78 percent of the insiders think the Republicans will lose between four and ten of the seats they hold now.

Much of the action on the ballot is in the primaries and the GOP primary has more contested races than the Democrats have. What kinds of Republicans will prevail? "Very conserative" ones, according to 28 percent of the insiders; "conservative" ones, according to 56 percent. How'd the "moderate" Republicans come out? Only 2 percent think they'll prevail in those primaries.

We included three open-ended questions this week, asking the insiders which races are most critical for various factions and which will be the most expensive. Finally, we asked a question suggested by one of the insiders, to wit: If you could pose one question to every candidate this year, what would it be?

The answers are interesting and, as always, are included in full in the attached file of verbatim answers. A sampling follows: 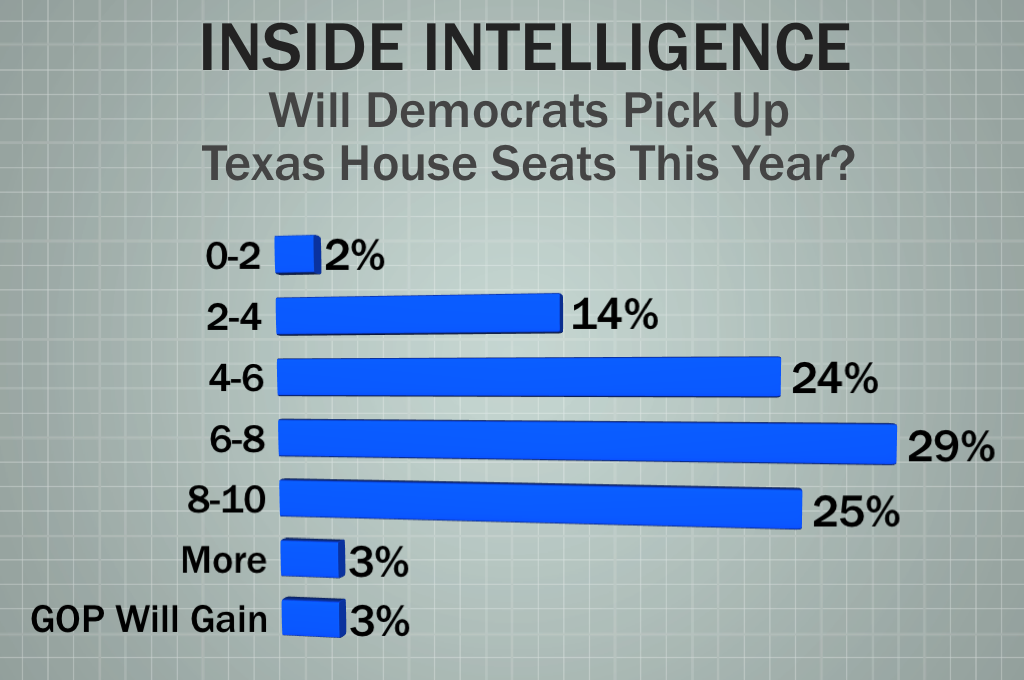 There are now 102 Republicans and 48 Democrats in the Texas House. How many seats will the Democrats pick up this year?

• "The ECONOMY will drive people to the polls to vote AGAINST Democrats."

• "OBAMA at the top of ticket wipes out Ds potential for significant gain."

• "The Democrats don't 'pick up' seats; the Republicans drew districts for them. The Democrats LOST 25 seats in the election of 2010."

• "6-8 for now, but if the Republicans keep up their idiotic attacks on women's health care & nominate Santorum, 8-12 is not out of the question."

• "With the higher turnout that will come in a presidential election year, I expect a net Democratic gain of 12. The pendulum always swings back." 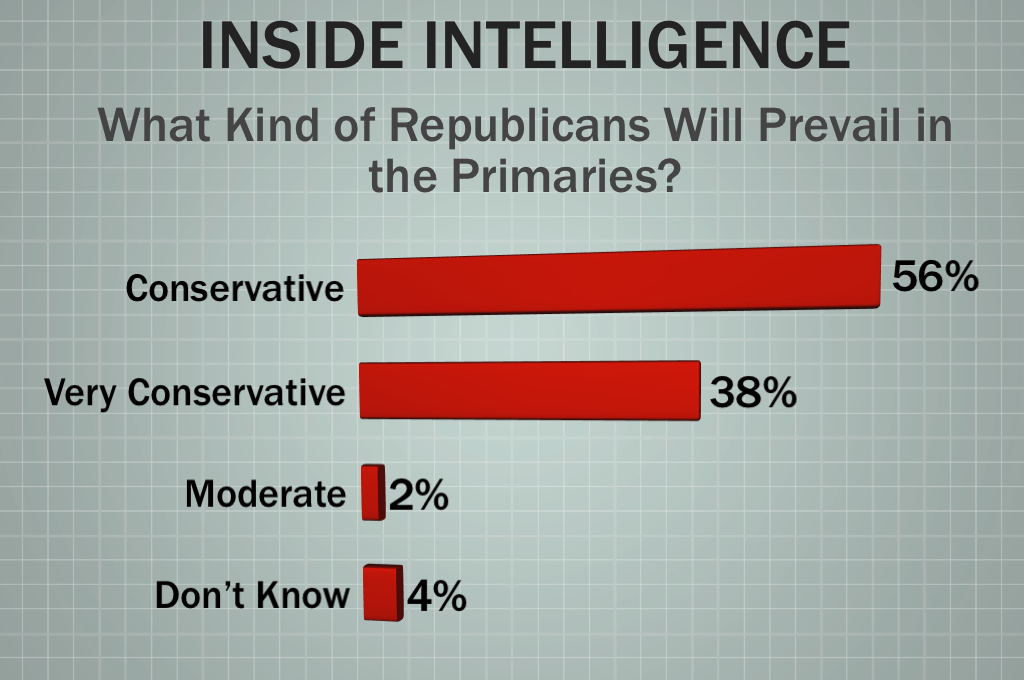 What sort of Republicans will prevail in this year's primaries?

• "Voters are FED UP with conservative rhetoric. They want CONSERVATIVE ACTION."

• "Though I wouldn't have said this just a couple of months ago, the climate seems to be shifting away a bit from the most extreme tea party elements in the GOP.  Despite that, however, the standard policy positions on issues such as women's health, etc. on the Right have gotten a lot more radical."

• "Difficult to answer because the crazies keep redefining what 'conservative' means. I am predicting that fewer crazies are elected. They will still be conservative, but they will be more realistic."

• "Depends on the district, but generally education issues (specifically, funding) will separate the far, far right from the right."

• "There will be a mix, and it will come down more to the strength of campaigns than the will of the people."

• "Anything less than very conservative is considered liberal these days."

What races are critical to the makeup of the next Legislature — the must-wins for the lobby, interest groups, the political parties, and other factions?

• "The Lobby has bet a bunch on Hancock and Shelton.  Davis is a must for the D's.  Lozano is important to the R's Hispanic outreach.  MQS is betting on a ton of losers and will finally be sent to the pasture next Session."

• "All of the suburban districts are critical to D prospects. Obama provided a surge in 08...but took it away in 10."

• "Wendy Davis is probably the most important race for the Democrats.  TLR has staked its reputation to some extent on beating Wentworth and Tuffy Hamilton.  The Republicans would really like to defend minority members such as Lozano and Garza."

• "With Dewhurst running, the U.S. Senate race is the most important to the makeup of the next legislature. If he wins - which is highly likely - who will become the next Lt Guv? Will he/she govern to the right of the right or hold decorum? We just don't know."

• "Lobby---the ones that will do as they say; interest groups---ones that think like they do; political parties--only ones that have drink the Kool-Aid"

• "Other than Straus, which members are elected is only of interest to the lobby and interest groups. Otherwise, to partisans, it is only a question of the size of the majority in each house."

• "There are no single races that are critical.  Republicans will dominate the General. Even if the House leadership changes it will not make any difference as to the legislative agenda. Gambling will not pass no matter what happens and abortion cannot be regulated anymore than it already; how could the House get anymore conservative?"

• "Lozano losing in the primary will further establish the ethnic bias of the Republican base. TLR will be exposed as a paper tiger after Wentworth cruises to victory. Keeping Wendy Davis as the 12th vote would help to keep the other Democrats honest."

• "The critical races will determine the leadership."

• "If parents and teachers can beat just a handful of legislators who voted to cut school budgets, a shockwave will go through the Capitol."

Which legislative and congressional races will be the most expensive?

• "Ames Jones v. Wentworth.  And nobody will outspend The Dew."

• "Dewhurst will spend the most, followed closely by Doggett.  Davis and Wentworth will be the most expensive legislative races."

• "The real expensive races will be in the Republican primary: US Senate, CD-14, CD-25. Other than that, in November look to CD-23 and SD-10.  That's about it for expensive races in the fall."

• "All of them all contested races are expense now days. Pity the poor lobby."

• "SD 10 leads the pack for the general. In the primary, the Wentworth and Harris seats will be costly, as could the Estes seat. In the House, I would bet the Scott-Herrero race will cost a ton in the general, and the White-Hamilton race will not be cheap, either."

If you could pose one question to every candidate this year, what would it be?

• "How will you pay for education"

• "Why would you ever want to hold political office?"

• "Are you willing to vote to increase taxes to pay for improvements to our educational system, transportation needs and water infrastructure, or do you oppose any increase in revenues for these purposes?"

• "Will you support a tax bill or will you have the courage to make deeper cuts in the state budget?"

• "Currently, the Texas Public Utility Commission is considering regulatory changes designed to make electricity more expensive and designed to increase generator profits. These changes are intended to address the state's future resource adequacy challenges. Do you think this is the right approach? Do you think regulators should change the rules to make electricity more expensive in Texas?"

• "When does government get so small that it's useless?"

• "If you are currently an elected official or if you win office, will you participated in the State/Federal Sponsored health insurance program?"

• "Why do you want to subject your family to this crap?"

• "When was the last time you read the U.S. and Texas constitutions?"

• "Can we adequately prepare the future workforce of Texas if we keep cutting public education?"