This week, we hit our insiders with questions about the state's economy and economic development, starting with a big question: What's the biggest infrastructure challenge facing the state?

It's water, according to 60 percent of the respondents, followed by transportation.

Should the state be spending economic development money to attract an Apple Corp. expansion in Austin while that company is in the news for its historic cash balances? The insiders split right down the middle, with half saying that shouldn't be a consideration and about as many (48 percent) saying it should.

The battles between Texas and the U.S. Environmental Protection Agency have been raging for months and months, and 49 percent of the insiders say the EPA's regulations have a negative effect on the state economy. Another 13 percent say the impact is positive, and 29 percent say there hasn't been an impact.

Our follow-up question: Who's right? Texas, according to 40 percent; the EPA, according to 32 percent. Another 17 percent say it's a tossup.

As always, we asked the insiders for comments and the full set of verbatim answers is attached. Here is a sampling: 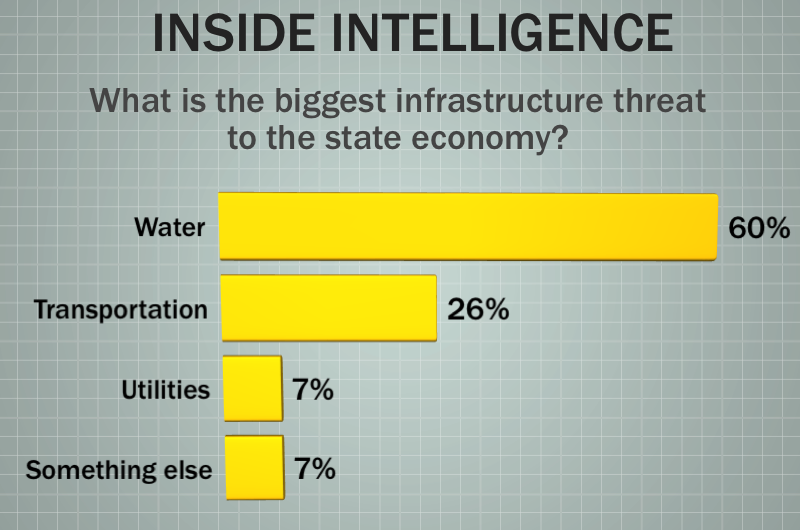 Which part of the of the state's infrastructure — either because of its capacity or its condition — presents the greatest threat to the Texas economy?

• "Water is the biggest long term issue, but power supply comes in close behind.  Power shortages will impact a greater part of the population sooner than water will."

• "We are building toll roads to ease some of the transportation issues.  But, water projects take 25 to 30 years to yield anything.  We are way behind."

• "We have to upgrade our roads and add high capacity, efficient, mass transit to stay economically competitive."

• "It is not just one... it is all three. Capacity and condition are issues now and will continue to be in the future."

• "If there are not any new electricity generation units built in Texas it will be difficult to maintain today's growth."

• "Transportation is the most immediate concern, while over the mid-range of the next few decades water will become increasingly critical."

• "Oil and gas and agriculture still drive the Texas economy and those industries, like humans, cannot survive without water."

• "If we have enough electric power, we can create any amount of water from brackish and sea water."

• "Public education. With only 22% of eighth graders graduating in six years, nothing else is nearly as troubling. Nothing."

• "No water, no electrical generation. Without those, the crumbling highways won't matter much." 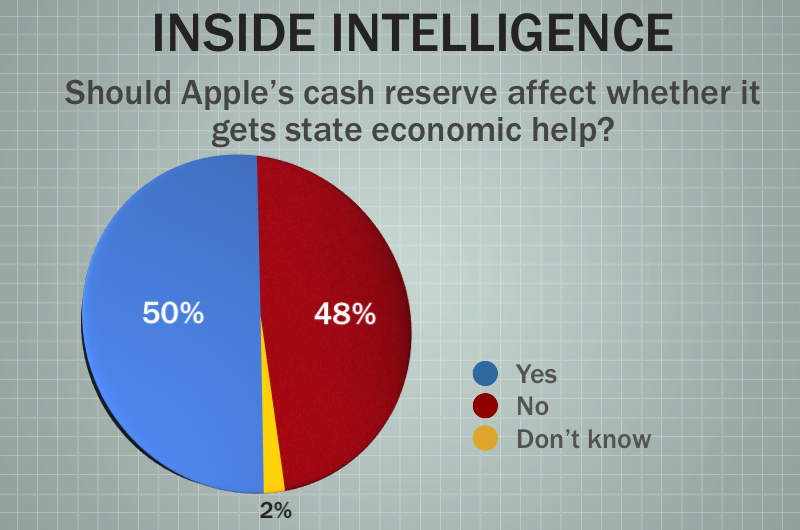 Should Apple's huge cash reserves be a factor in whether Texas gives financial aid to that company to encourage it to expand operations here?

• "Texas needs to get out of the socialist mindset of choosing particular businesses and industries to fawn cash upon. Spend precious tax dollars on a limited number of public needs, such as schools and roads, instead of private interests."

• "It isn't about helping Apple, it is about getting those jobs located in Texas."

• "What they have is not the issue.  What other states are willing to offer to attract the company is the issue and we need to be 'in the ball park'"

• "EVERY company should pay its own way. TX financial 'aid' is a an abuse of taxpayer funds."

• "Apple will do more for Texas' business friendly image than any other company that has benefited from our financial aid. We cannot buy that type of press. Plus, it'll be fun to read about how Texas has scoreboard over California."

• "Will the deal make Texans more prosperous?  Which Texans?  The decision ought to be about the benefit we get."

• "Use all of the tools at hand and make the best deal possible that works for Texas."

• "Unfortunately, to compete with other states, you have to play the game.  It's table stakes." 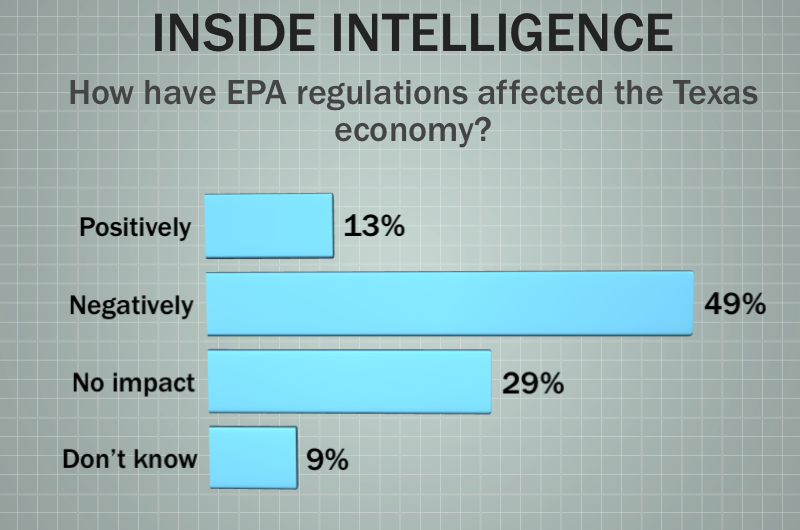 Do you believe recent regulatory actions of the Environmental Protection Agency have negatively or positively affected the Texas energy business and the Texas economy?

• "It won't help the Texas energy business and the Texas economy if the Houston ship channel floods out because of rising sea levels caused by greenhouse gas emissions from Texas."

• "For all the bluster, the Texas energy business is doing just fine, making more money than ever."

• "The popular perception is that the EPA has hurt energy development; but the numbers in the Texas economic picture don't support that."

• "How can more restrictions and regulations have a positive effect on a competitive energy market?"

• "The EPA needs to be reined in. It is tragic that the Supreme Court gave them the right to control greenhouse gases. I hope another case can overturn that bad decision."

• "Until the state of Texas gets over this never-ending state's rights temper tantrum, the full positive effects of the EPA's actions will not be realized."

• "The amount of wasted state resources (man-hours and money) fighting the EPA will never be recovered." 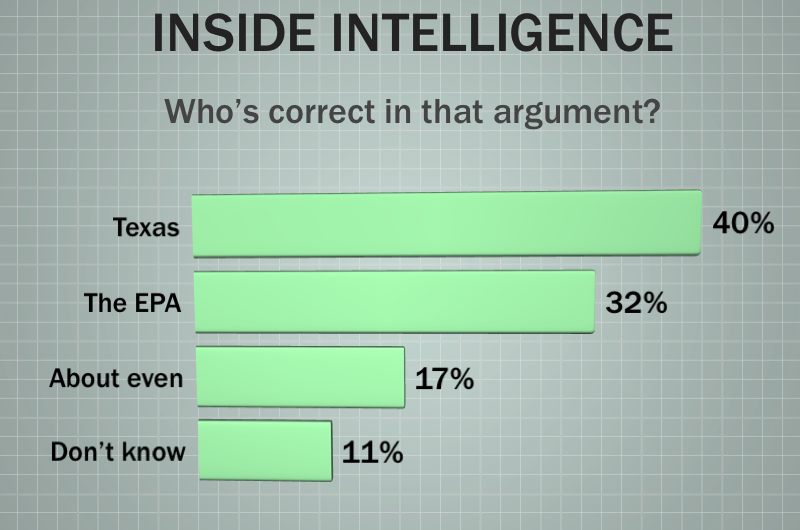 Who's right? Texas or the EPA?

• "I know that I'm a bit unusual in this respect, but I really enjoy breathing."

• "We need to strike a careful balance between continuing economic development and protecting public health."

• "Sadly, TCEQ and Lege leadership have never provided environmental safeguards necessary to ensure clean air and water. Their abysmal record of refusing to provide these safeguards will hurt the economy in the long-run."

• "If you take away the extreme rhetoric from us Texans, the actual facts favor Texas.  However, I guess we find it more fun to talk about the 10th Amendment."

• "Texas is normally right when fighting the feds.  See e.g., the tidelands issue."

• "The Obama EPA is being too aggressive in their administration of the laws, but most of the laws were passed under Bush I and ordered by Court action under Bush II, largely by Judges put on the Bench by Reagan and Bush I."

• "At first blush I thought it was the EPA, but the more I learn of the details the harder it is to see any merit behind the new EPA cross state rule."

• "Neither. But Texas officials have irresponsibly escalated the conflict into a partisan battle that we all lose"

• "It is doubtful either one is right."