With one exception, we asked open questions this week instead of multiple choice, asking who in the congressional delegation, in the state Senate and in the state House is most likely to lose their seat in this year's elections. We also asked about the leadership of the two houses of the Legislature, trying to get a look at who'll be in charge if and when Lt. Gov. David Dewhurst steps aside, and having an early peek at House Speaker Joe Straus' vulnerability.

Two names float to the top of the list of at-risk members of Congress — Francisco "Quico" Canseco, R-San Antonio, and Lloyd Doggett, D-Austin. Two names rise in the races for Texas Senate — Wendy Davis, D-Fort Worth, and Jeff Wentworth, R-San Antonio. As you'd expect, a pile of names come up in House races.

Two senators — Kevin Eltife, R-Tyler, and Robert Duncan, R-Lubbock — lead the early running for lieutenant governor, should Dewhurst win his race for U.S. Senate. Finally, we had exactly one respondent who said Straus won't get another term. Three said "Don't know". Everybody else thinks he's a shoe-in.

As always, we've attached a copy of the full verbatim answers to this week's survey. A sampling of what they had to say follows. 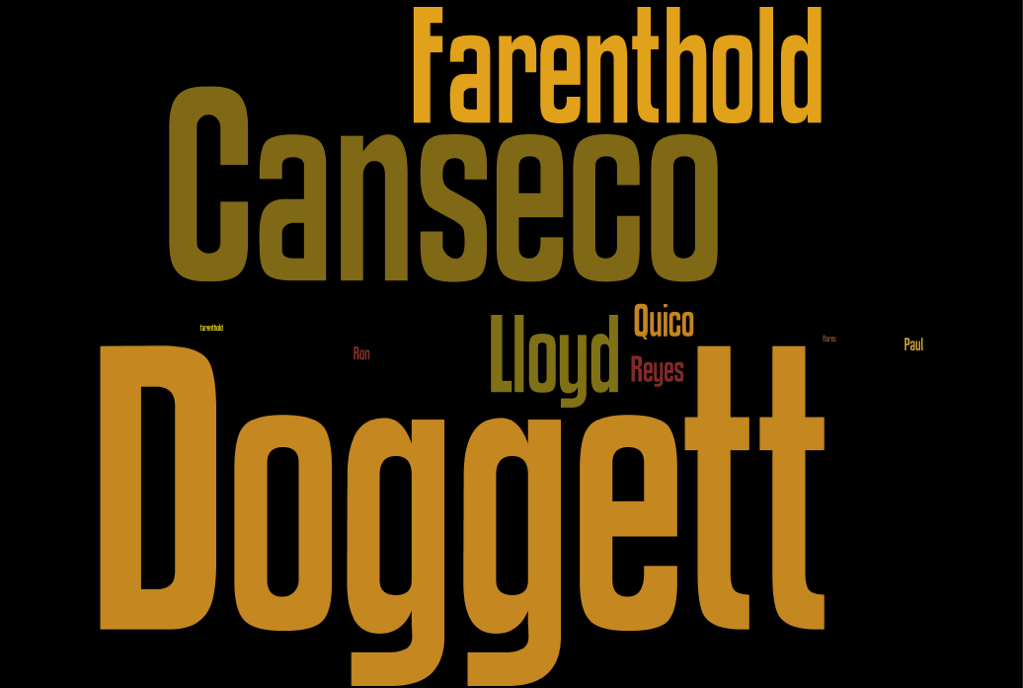 Which members of the Texas congressional delegation are most likely to lose their seats?

• "Canseco, Farenthold, maybe Doggett depending on the primary challenger (if any)"

• "Not Lloyd Doggett. The cat with 9 lives will emerge with 6 or 7 lives and half his war chest intact."

• "Doggett and Canseco, but I think they both will be ok. Reyes will have a tough primary."

• "Farenthold is the only one even vulnerable. Quico got a pretty good shake from the court map, and Flores will be around until he's ready to go play golf in Bryan full time. And I'll believe Doggett's dead when I see him in the casket. And even then I'll put a mirror under his nose..."

• "Lloyd Doggett (twice--his old one in re-districting, and his new one in the primary)"

• "Canseco seems the most vulnerable with Farenthold more secure in his new district but still vulnerable because not a skilled campaigner." 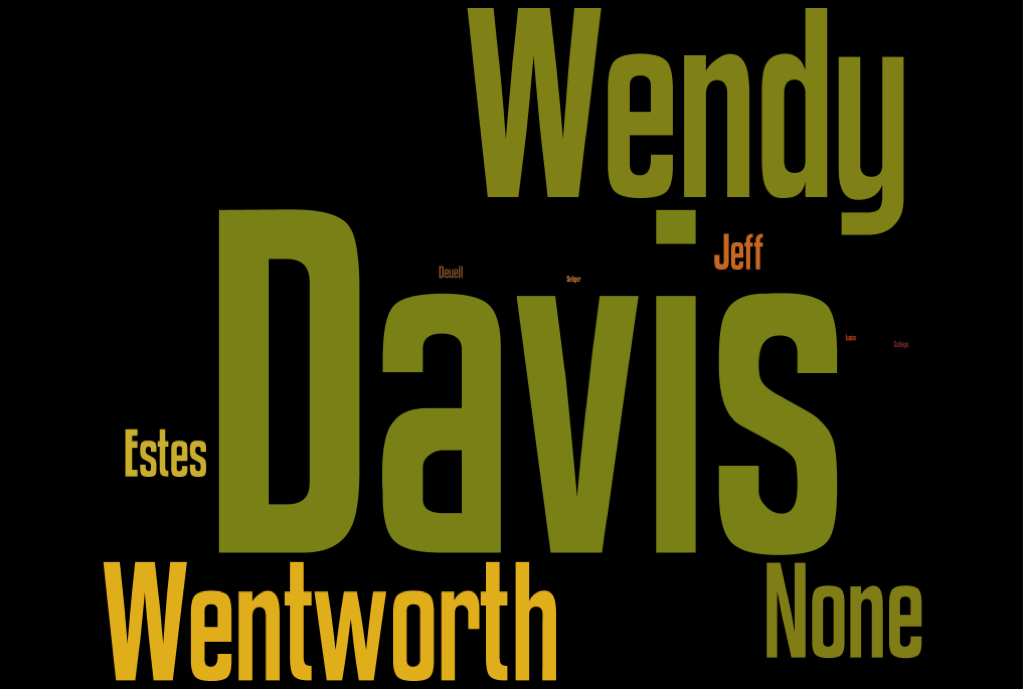 Which Texas senators are most likely to lose their seats?

• "Davis and Wentworth are the only two with serious challenges but both of them are likely to retain their seats. All the money in the world is probably not enough to make Shelton or Elizabeth Ames Jones good enough candidates to win their races against popular incumbents."

• "Wendy Davis. Biggest target out there in dangerous territory. This ain't 2008."

• "Davis. Her complaining all the time is similar to what caused Brimer problems when she beat him. Wentworth will be fine - his criticisms of Jones sunk her."

• "Senator Davis is toast. Sen. Wentworth might have issues, but he seems to be winning that race right now. And I guess Sen. Estes is on the watch list now, too."

• "Huh? Incumbents will not be defeated."

• "Wendy Davis' district is winnable by her but still likely to be hard fought." 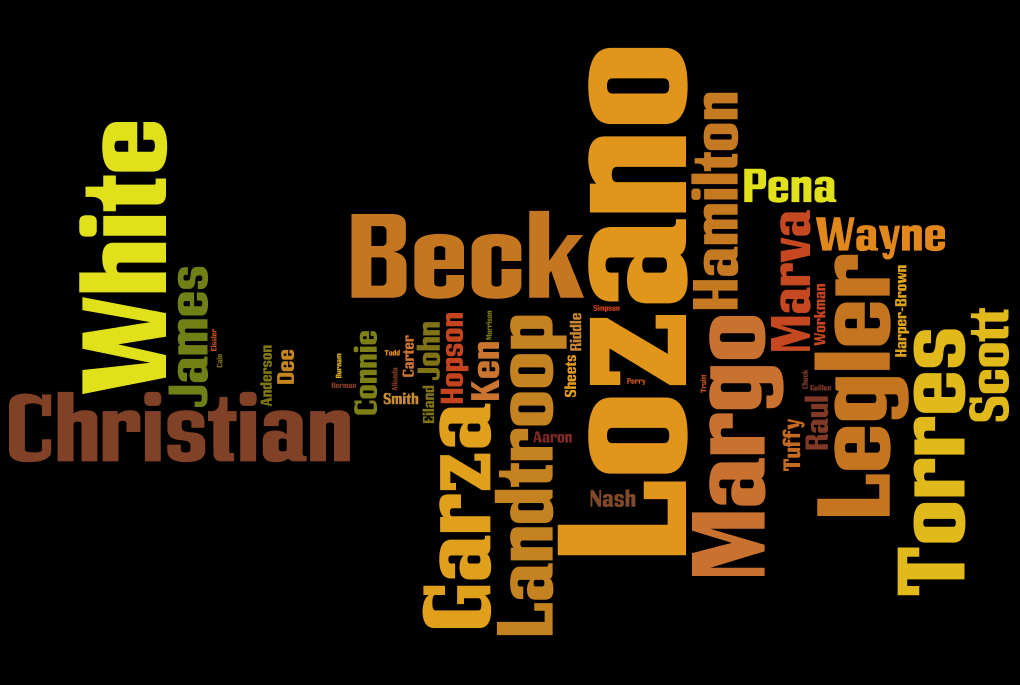 Which Texas representatives are most likely to lose their seats?

• "Brave move by Lozano. Might be his end, however."

• "I think those already bailing out saw the writing on the wall, but I'll add Hamilton and Smith."

• "Let's hope that the lightweights of '11 are shown the door. Paging Representatives White and Beck, please exit stage (far) right."

• "That is very difficult to gauge from Austin."

• "No names, but I do expect the Democrats to pick up a dozen seats based on bounce back from a terrible year in 2010 and higher turnout in 2012." 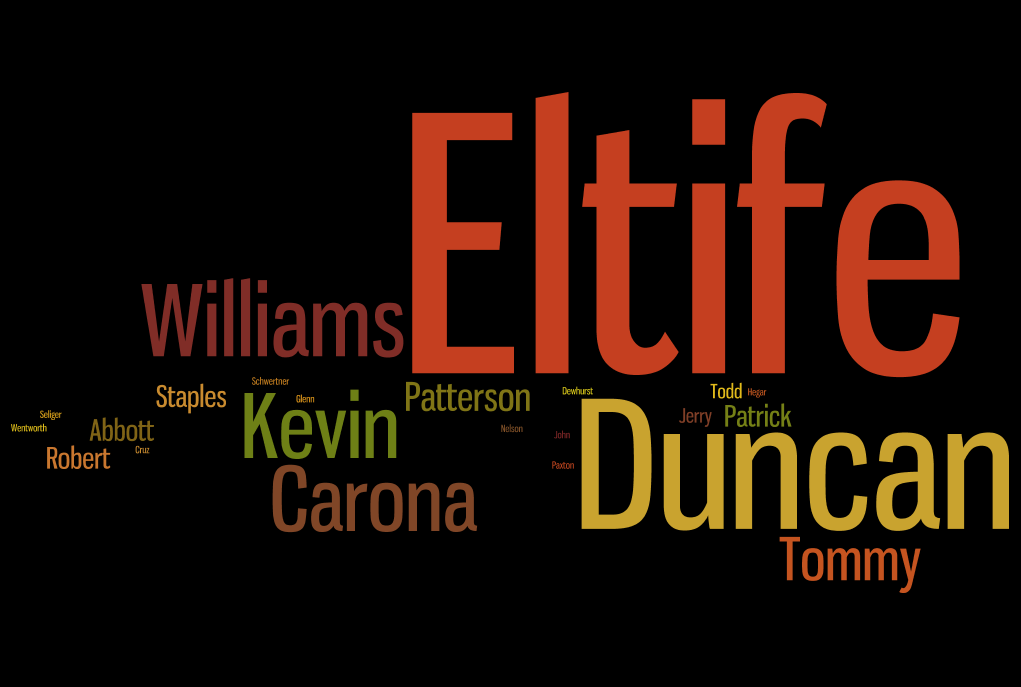 Who'll be the next lieutenant governor if Dewhurst moves on?

• "Carona is in much better position that people generally perceive. The conventional wisdom is Eltife or maybe Duncan. History would suggest that a more conservative Republican or someone with the unified support of the Democrats will win."

• "Duncan's the most adult and common sense of them with some seniority who can work with both sides, so it won't be him. Maybe Eltife. Anyone but Patrick."

• "Senator Duncan has the gravitas and budget experience to do the best job but you have to wonder if Governor Perry's sanctuary city knife in the back will have a lingering impact. Eltife is well liked and a keen mover of process. With Paxton and Schwertner in the wings you know that Dan Patrick has his Machiavellian dreams in high gear. Let's hope the Senate R's do not soon forget the rejection of tradition and process that he represents."

• "Dewhurst will still be around."

• "Eltife. If a Republican wins the White House, look for Perry to seek a Cabinet or Ambassador position. He won't want to wait eight years to run for President, in which case Duncan and Eltife would be elevated."

• "Whichever Republican who can consolidate the Democrats"

• "Sen. Eltife. And a big shout out for Senate District 1 being the breeding ground for interim Lite Guvs."

Will Joe Straus win another term as speaker of the House?

• "It's awfully hard to unseat a sitting speaker as evidence by the multiple, unsuccessful attempts to remove Tom Craddick. Vote counters may think they have enough, but opening day jitters find the weak ones too afraid to follow through!"

• "Let the members decide without frantic feeding frenzies from outside groups. What a concept."

• "Someone has to beat him and that person does not seem to exist."

• "If the hardcores couldn't get him after the 2010 tsunami, they're not going to get him. There will be 8 to 10 more D members than last time, and where else are they going to go?"

• "You can't beat somebody with nobody. In 2011, there were two opposition candidates (Chisum and Paxton), and neither will be back in 2013. Members will not rally around Craddick again, and Phil King can't get the votes. Take out the strong members leaving for the Senate (Hancock and Taylor), and take out the key Straus lieutenants (Bonnen, Branch, Hunter, Keffer), and you're left with no viable opposition."

• "There is no coalition to oppose him in the election, but the session will be very rough. No one will want to have a special session in 2014 -- even if the Supreme Court suggests that school finance needs to be addressed prior to 2015."