After completing his family medicine residency in 1985, Dr. Javier Saenz opened a practice in the Rio Grande Valley town of La Joya. Born 20 miles away in Rio Grande City and raised by a father who worked as a grocery clerk and a mother who worked on a farm, Saenz wanted to “come home” and serve the valley, an impoverished region that is medically underserved.

Today, Saenz Medical Center treats up to 150 patients per day. Saenz is the volunteer physician for the local high schools and their football teams. A middle school is named after him.

Despite his success, Saenz, 56, said he feels nothing like a hero these days. He said his practice is hanging by a thread. 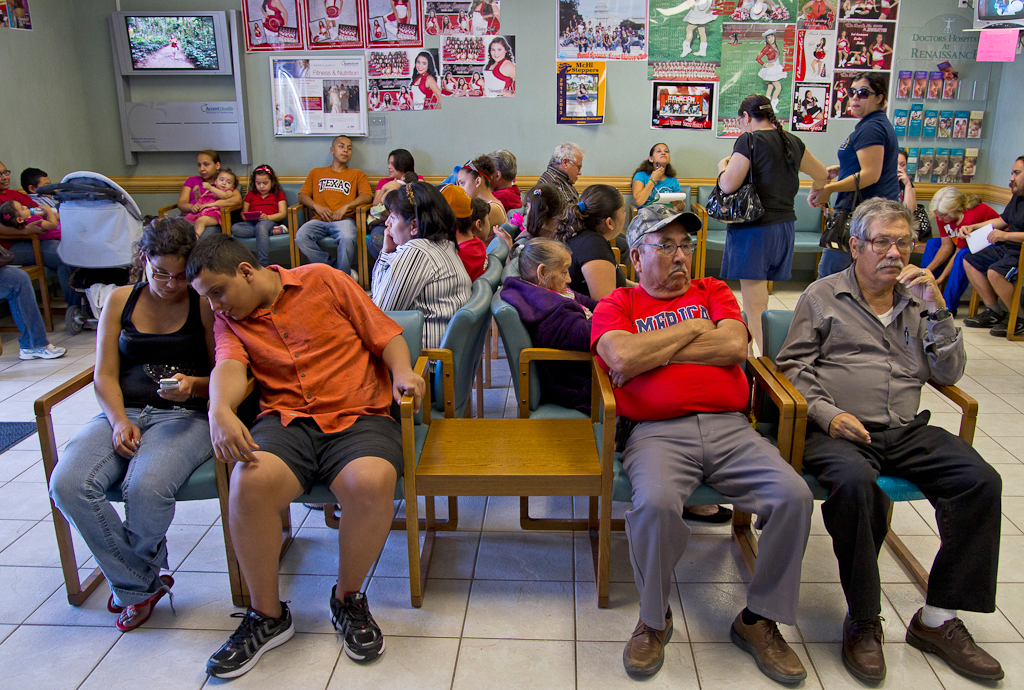 Enlarge photo by: Reynaldo Leal
Half of the patients seen by Dr. Javier Saenz qualify for Medicaid and Medicare.

His troubles reflect a statewide problem for doctors who treat a disproportionately high number of the reported 320,000 low-income Texans who are fully and dually eligible for Medicare, the federal insurer of the elderly, and Medicaid, the joint state-federal health care program for indigent children, the disabled and the very poor. On Jan. 1, the state reduced its share of co-payments for such patients. Physicians who treat them are seeing revenue disruptions. Many, like Saenz, are not sure they can stay in business.

The Legislature last year directed the state’s Health and Human Services Commission to cut the Medicaid budget by $3 billion over two years, including savings of $475 million for this single change.

“We found that 18 other states already limit the payment for dual eligibles to the state’s Medicaid rate,” Stephanie Goodman, a spokeswoman for the commission, said in a prepared statement. “And that makes sense on the face of it. Why would a state pay a higher rate for clients who also have Medicare coverage than it does for other clients?”

Because the rule took effect on Jan. 1,  patients were unlikely to have met their $140 deductible. And while Medicare usually pays 80 percent of services, including office visits and checkups, Texas no longer covers remaining co-pays if they exceed Medicaid rates. For example, if Medicare reimburses a doctor $80 for a $100 service, the state will only pay the difference if the Medicaid allowable is higher (and health providers say that's rarely the case). In this hypothetical scenario, providers will lose $20 that used to be paid out of Medicaid. And because it's still early in the year and beneficiaries cannot be directly billed, doctors are suffering the additional loss of revenue because patients haven't met that deductible.

Dr. Bruce Malone, the president of the Texas Medical Association, warned lawmakers in November that such cuts would cause physicians to stop taking both Medicaid and Medicare patients and lead to a minimum 20 percent reduction in revenue.

“The proposed rules penalize the physicians who care for the sickest and frailest Medicare patients,” he said. “They hit particularly hard practices in rural, inner-city and border Texas.”

By February, local and state medical associations said physicians with a high volume of dual-eligible patients were contacting them for help amid a cash-flow crisis.

Adding to his problems, Saenz said he has not been reimbursed for any office visits or deductible-related procedures this year because of coding glitches. Texas health officials said they are "solving the problem" and that most claims will be resolved by March 30.

Goodman said her agency is sensitive to doctors’ concerns. It plans to exempt mental health services from the policies and to increase Medicaid rates for cancer chemotherapy medications to the current Medicare rate.

Enlarge photo by: Reynaldo Leal
Dr. Javier Saenz, a family practitioner, has lived and worked in La Joya since 1985.

Many clinics are expected to absorb the changes. But Saenz said his practice — where 80 percent of the patients rely on Medicaid or Medicare and half qualify for both — cannot. After depleting his personal savings, he has asked a bank for credit so he can continue operating and make payroll for 25 employees and three other doctors.

Though he desperately needs payment from the government, he refuses to turn away his oldest patients.

The Texas Medical Association has released an advocacy video about Dr. Javier Saenz's struggles. You can view it here.