The attorney general has $12 million in his campaign account and has done a terrible job of keeping secret his ambition to run for governor of the state. The governor, meanwhile, has three years left in his term, is just back from a fruitless run for president and is trying to knock down any talk that he might be a lame duck. He's done that by saying he might run for another term in the middle office and hasn't ruled out another run for president, should the stars align.

So what if they ran into each other in 2014? The insiders think Greg Abbott would win. Only a third picked Rick Perry in that hypothetical head-to-head, while 60 percent would bet on the AG.

We asked about real races, too. With four well-funded candidates (from a total of 10) seeking the Republican nomination for U.S. Senate, 62 percent of the insiders expect a runoff in that race; about a third expect it to end in the first round, on May 29.

The only current officeholder in the race for the open seat on the Texas Railroad Commission, state Rep. Warren Chisum, R-Pampa, is the insiders' favorite to win that contest. While 56 percent chose Chisum, 39 percent think the winner will be Christi Craddick.

We closed with an essay question this week, asking the insiders — on the eve of a new filing period for political races in Texas — who might provide the biggest surprises.

As always, we have attached the full set of verbatim answers to the questions. A sampling follows: 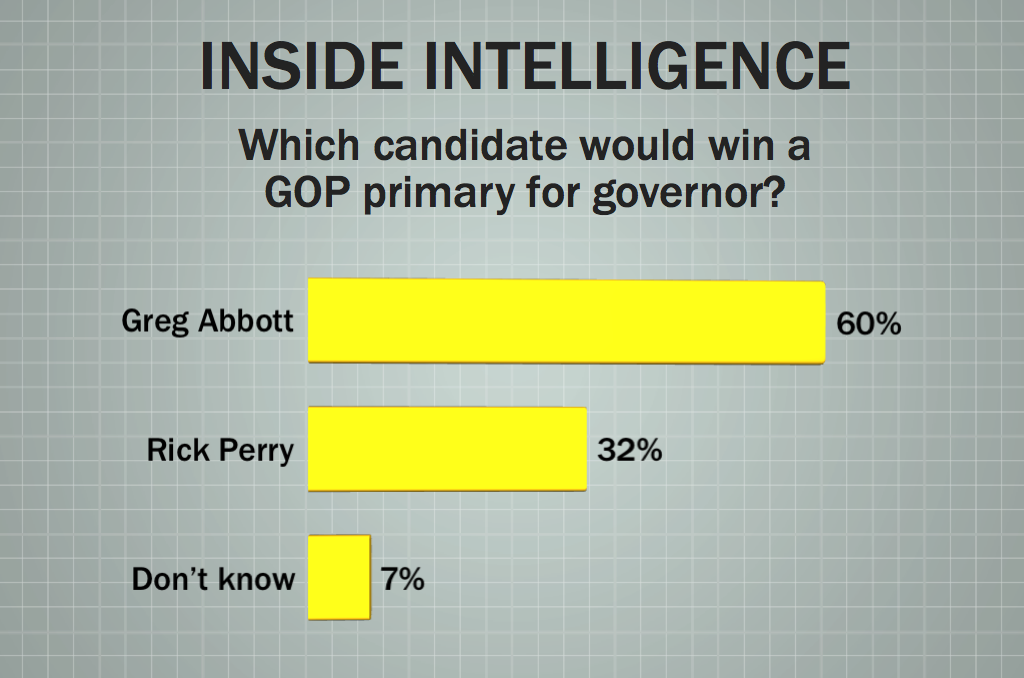 Who would win a Republican gubernatorial primary between Greg Abbott and Rick Perry?

• "At this point, just about anybody could beat Perry in the Republican primary--which is why I don't think Perry will run again. If Dewhurst wins a 6-year U.S. Senate term, even he might decide to challenge Perry. Then, Dewhurst could have the job he always wanted and also appoint his replacement in Washington. Such a deal."

• "What are you kidding?! After that presidential debacle it will be ANYBODY BUT PERRY!"

• "The frost is off that pumpkin. This presidential primary wasn't exactly a Phil Gramm '96 failure. It was an embarrassment of the state. His repeated failures were a reflection on all Texans. The R's would rather shoot their own dog than have D's shoot it for them."

• "The last Texan to beat Rick Perry in a Texas primary was... Gimme a minute. It'll come to me. Damn, what was his name?"

• "Question assumes Perry would actually run again, and Abbott would have the political chops to take him on. He doesn't."

• "Abbott's main, and perhaps only, argument that he can use in unseating Perry, is that 'it's time for him to go.' That didn't work for KBH. Republicans are going to have a hard time throwing out Perry without a really good reason. What's he done that Republicans have really hated?"

• "They both appeal to the same segment of Republican primary voters. Perry has long-term relationships on his side, but Abbott has a mostly unvarnished record on his." 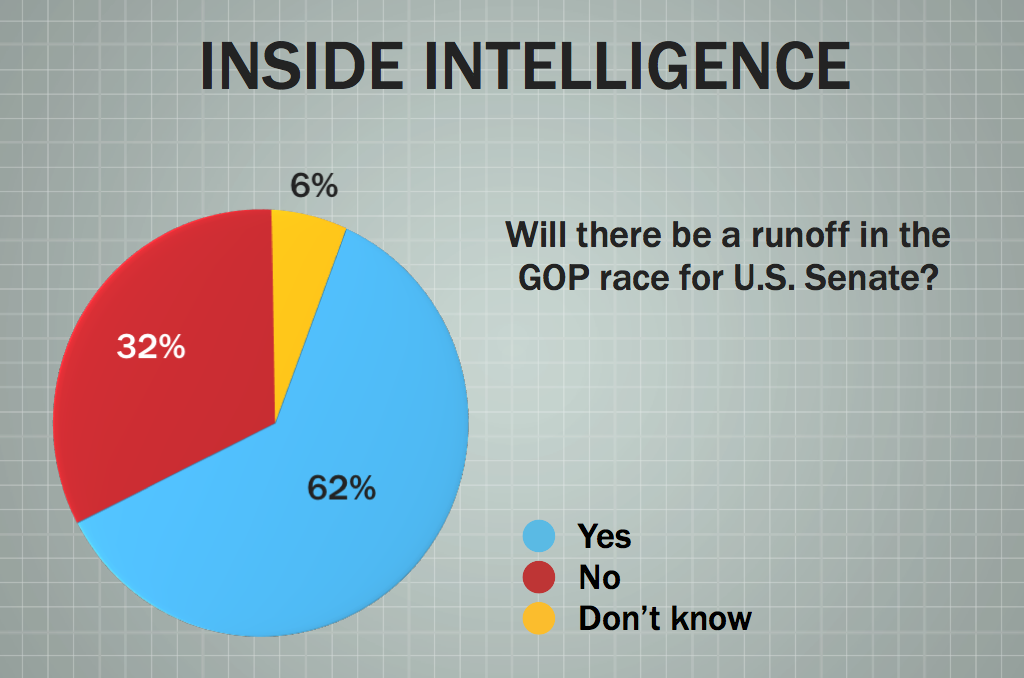 Will there be a runoff in the Republican primary for U.S. Senate this year?

• "Dewhurst should have a comfortable margin but under 50% because of the size of the field."

• "Dewhurst will drown out the others on TV and win without a runoff."

• "Still can't see a combo of Cruz/Leppert/James getting to 50%, but the later we keep moving the date back, that probability increases exponentially."

• "Whether or not Dewhurst can get to 50% in the first round is an open question, but he better hope he can. A low turnout runoff would be a nightmare scenario for him, and would render his name ID and financial advantages irrelevant. Look for the Dew to launch a takedown of Cruz in the next couple of months."

• "It depends on if some of the lesser candidates continue with their vanity campaigns."

• "Absent a major misstep by Dewhurst, there will be no runoff. Polls that say otherwise are not credible."

• "Sadly, no runoff. Dew will probably get it on his first try."

• "Between Dewhurst (money) and Cruz (because he's the most conservative)" 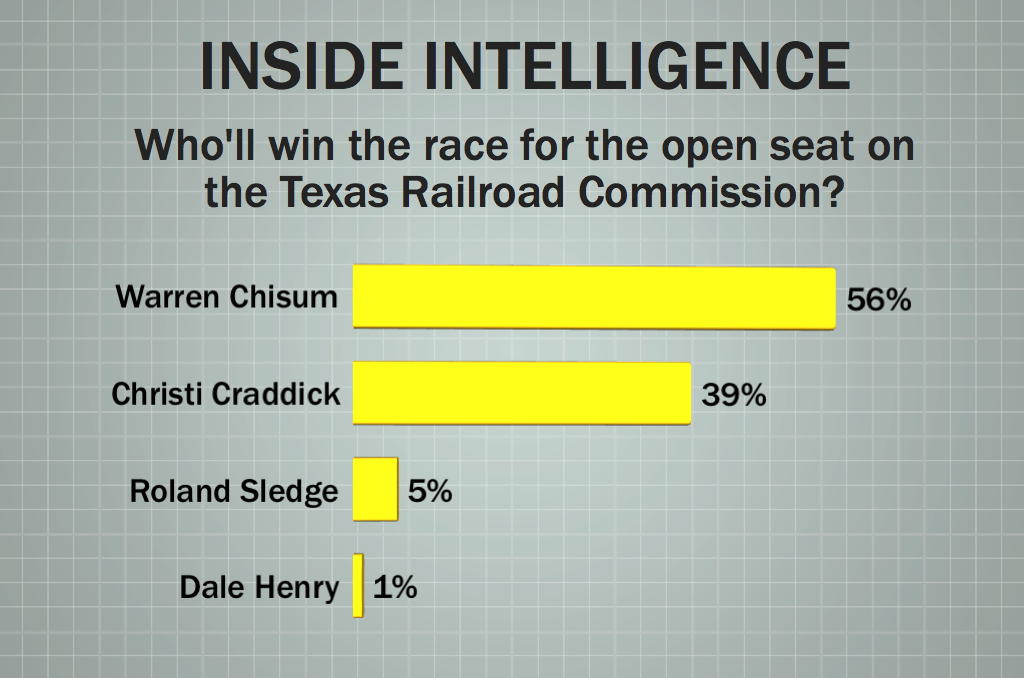 Who will win the race for Elizabeth Ames Jones' seat on the Texas Railroad Commission?

• "Who's for eliminating the agency?"

• "Not the most-qualified, the one who has worked in the industry for decades. Instead it’ll likely be the flake who’s-out-but-may-now-be-back-in after winning the Ft. Worth straw poll, or the entitled daughter of a certain former speaker, or the far right's favorite legislator."

• "In a down ballot this cycle, Chisum's history of social conservatism gives him a huge edge."

• "The one woman with the last name people have heard before? Yeah, that one."

• "Would hope one of the others, but the name CRADDICK will be the most recognized name in this race"

• "Becky Berger will be disappointed to learn that 'Inside Intelligence' does not have her in the race. A runoff in the GOP is likely between Craddick and one of the white guys. The winner of that will be the next Commissioner."

• "Warren has all of the advantages of experience in the industry, personal connections galore, and decades as a public figure. He's campaigning with all the energy of a 20-year-older to boot. Christi might make it in politics one day, but this isn't the day."

• "All one had to do is look at the resumes. I believe Chisum will be strong and have what it takes to win it. Those that support him publicly, however, will feel the pain next session. Dads hate when someone messes with their daughter."

• "Names are powerful. Look at Carrillo, the odds-on, industry-backed favorite, an incumbent no less, getting upended by Porter, a complete unknown. Craddick could win this on name alone."

As soon as election dates are set, the federal redistricting judges have said they will set a new deadline for campaign filing, allowing candidates to sign up for races, to drop out, or to amend filings they made earlier. What will be the biggest surprise? [Editor's note: We asked this before the court set a May 29 primary and a March 9 filing deadline.]

• "A last minute serious challenger to a 'comfy' incumbent."

• "No surprises. It's hard to keep a secret in our political world. The birds like to sing."

• "How about the biggest surprise is that the courts decided to act after wasting weeks of time and tons of money?