The economy tops Texas voters' list of the most important problems facing the country, and immigration and border security remain their top concerns at home, according to the latest University of Texas/Texas Tribune poll.

The economy ranked as the top national problem for 30 percent of the respondents, with federal spending/national debt at 17 percent. Political corruption/leadership topped national troubles for 11 percent, and 10 percent said unemployment/jobs. Combined, economic issues accounted for 57 percent of the responses. None of the other issues on the list registered above 5 percent.

Immigration and border security made up the top issues facing the state for 28 percent of the respondents, followed by the economy and unemployment/jobs, which combined for 22 percent. Two issues — education and political corruption/leadership — each got 8 percent, while other topics languished. 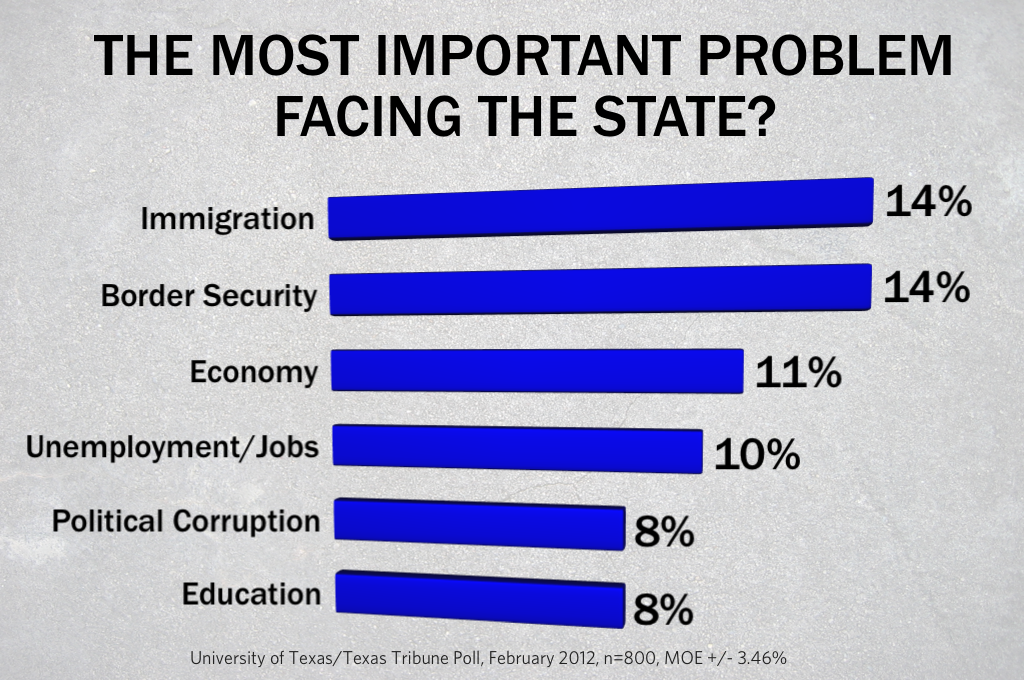 "I continue to be amazed at the extent to which Texans hold border security and immigration above jobs and the economy," said Daron Shaw, co-director of the poll and a government professor at UT-Austin.

"Texas has this sense that you need to do something about these people, because they're already here," he said. "The general Republican line is, 'Close the borders, then we'll talk.'"

The pollsters asked voters a wide range of questions about public policy on immigration, life and death, how government works, civil rights and the wealthy.

"Broadly, Texas is surprisingly moderate in the big-picture issues like pathways to citizenship, but can still convey a kind of rock-ribbed conservatism when it comes to benefits or to anything that touches on law and order," said Jim Henson, co-director of the poll and director of the Texas Politics Project at UT-Austin, where he also teaches government.

"Immigration and border security remain prominent because they are prominent issues at the state level with the GOP base," Henson said.

Voters were split when asked if they would support an overhaul of federal immigration laws that included a pathway to citizenship for illegal immigrants already living in the U.S. Overall, equal numbers supported and opposed it, but the intensity was different, with 29 percent strongly in opposition to such laws and 20 percent strongly in support.

Immigration policy, they said, should favor immigrants with useful job skills (41 percent) over those with family members living in the U.S. (26 percent).

Asked about the availability of abortion, 15 percent said that the procedure should never be permitted, and 38 percent said it should always be allowed as a matter of personal choice. Most of the rest of the responses were in between, with 29 percent saying abortions should be allowed only in cases involving rape, incest or the life of the mother and 12 percent saying it should be allowed in other cases, but only "after the need for the abortion has been clearly established." 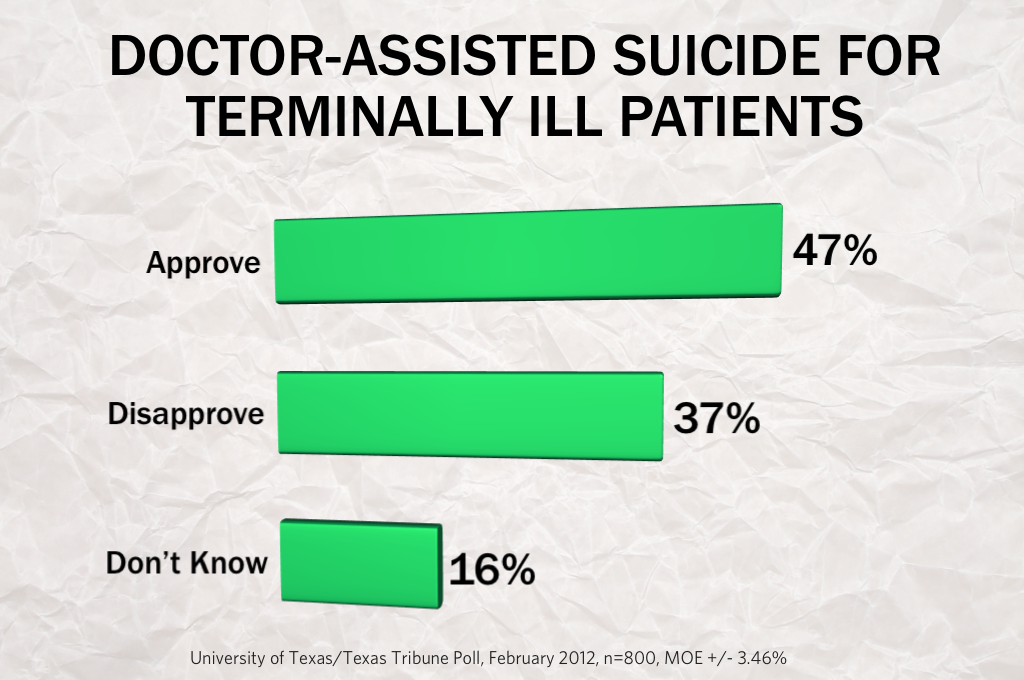 • Nearly half — 47 percent — said they approve of laws that allow doctors to help terminally ill patients commit suicide, while 37 percent are opposed and 16 percent didn't choose either option.

• Redistricting has been in the news and in the courts for several months, but voters' views are mixed on whether to hand political mapmaking to an independent, appointed commission. While 42 percent approve of that idea, 27 percent don't, and 30 percent are undecided.

• Most voters — 51 percent — said people who are less well off are envious of rich people, while 29 percent said that's not so. And most think that the rich got where they are by a combination of birth and connections, on one hand, or hard work and education, on the other. Twenty-four percent attribute wealth to hard work, ambition and education alone, while 21 percent attribute wealth to connections and being born rich; 53 percent said it's a combination of those things. 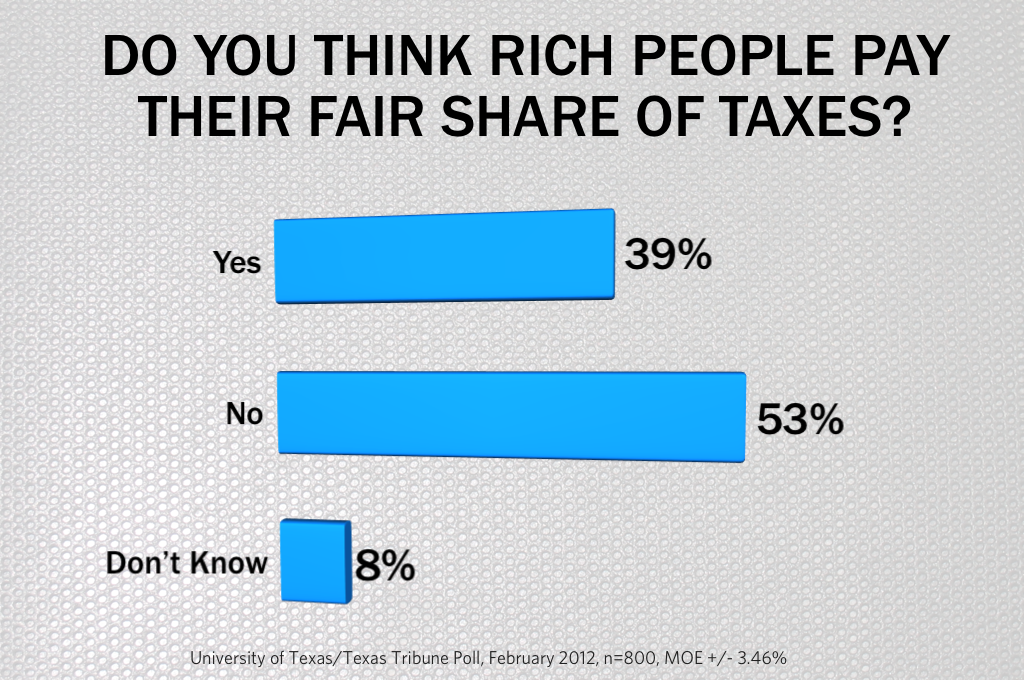 When it comes to the rich and taxes, 53 percent of Texas voters don't think the rich pay their fair share, while 39 percent think they do. "That's the question the White House is looking at," Shaw said, referring to the coming general election for president. "It's the sense that the wealthy are gaming the system."

The latest UT/Texas Tribune internet survey of 800 Texas voters was conducted from Feb. 8-15, and has a margin of error of +/- 3.46 percentage points. A full set of the questions and answers, the poll methodology and a full set of the crosstabs from the survey are available above.