Former Sen. Rick Santorum of Pennsylvania has a commanding lead among Republican presidential candidates in Texas, according to a new University of Texas/Texas Tribune poll.

Santorum would get the votes of 45 percent of the respondents if the election were held today, according to the survey. The other three candidates in the GOP race — former U.S. House Speaker Newt Gingrich, former Massachusetts Gov. Mitt Romney and U.S. Rep. Ron Paul of Texas — are clustered well behind. Gingrich got 18 percent, Romney received 16 percent and Paul garnered 14 percent.

The presidential race in Texas remains highly volatile, and the numbers could change significantly between now and the state's primaries. They were originally scheduled for March 6 — early voting would have started this week — but have been delayed by redistricting litigation. Texas still doesn't have all of its congressional and legislative maps in place, and May 29 appears to be the earliest possible primary date.

If the maps are further delayed, the primaries could slide into June. Either way, the other candidates have time to try to catch the front-runner, and the delays move the focus and some electoral clout from Texas to other states that will vote sooner.

"Rick Santorum has cut through the clutter and emerged as not simply the non-Romney candidate, but as the most credible conservative candidate in the race," said Daron Shaw, co-director of the UT/TT poll and a professor of government at the University of Texas at Austin. "He hasn't totally clinched that, but Santorum has gone from a guy who couldn't get two minutes in a debate to being a guy who looks like the front-runner — not just in Texas, but maybe nationally."

In the October UT/TT poll, Herman Cain led with 27 percent, followed by Rick Perry at 26 percent, Paul at 12 percent, and everyone else in single digits. Santorum had just 1 percent in the October survey.

Slightly more than half of GOP voters are satisfied with the choices in their presidential candidate field, while 34 percent said they are unsatisfied. What are they seeking? Someone with the ability to beat President Obama was chosen by 45 percent, followed by someone with high standards and character (25 percent), someone who shares issue views (20 percent) and someone who has the right experience (8 percent).

"It could change again, and it will change," said Jim Henson, who co-directs the UT/TT poll, teaches government at UT-Austin and heads the Texas Politics Project there. "There's no reason to think this is static. Nothing about this GOP race, either in Texas or in the country, has been static." 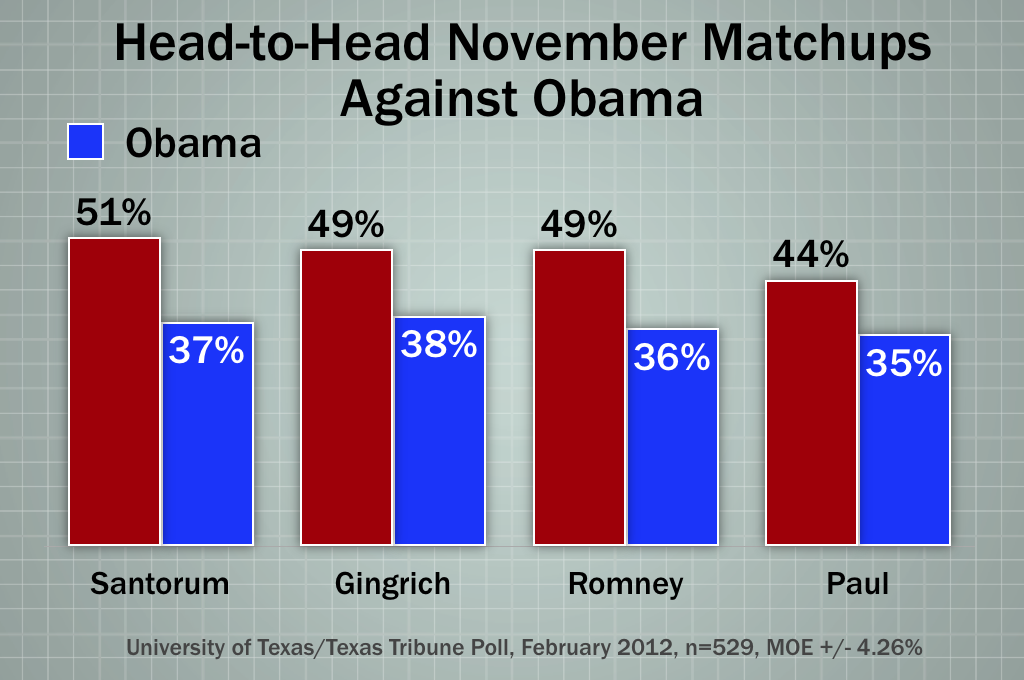 One thing has remained consistent: All four Republicans would beat Obama in a general election in Texas. In head-to-head matchups with the president, Santorum would win 51 percent to 37 percent among likely voters, Gingrich by 49 percent to 38 percent, Romney by 49 percent to 36 percent, and Paul by 44 percent to 35 percent.

"The GOP primary electorate has been and remains very conservative," Henson said. "The second thing is that Republican Party identification is still the name of the game in Texas. If you're the guy with 'R' next to your name and you're running against Barack Obama in a general election, you have a pretty significant advantage." 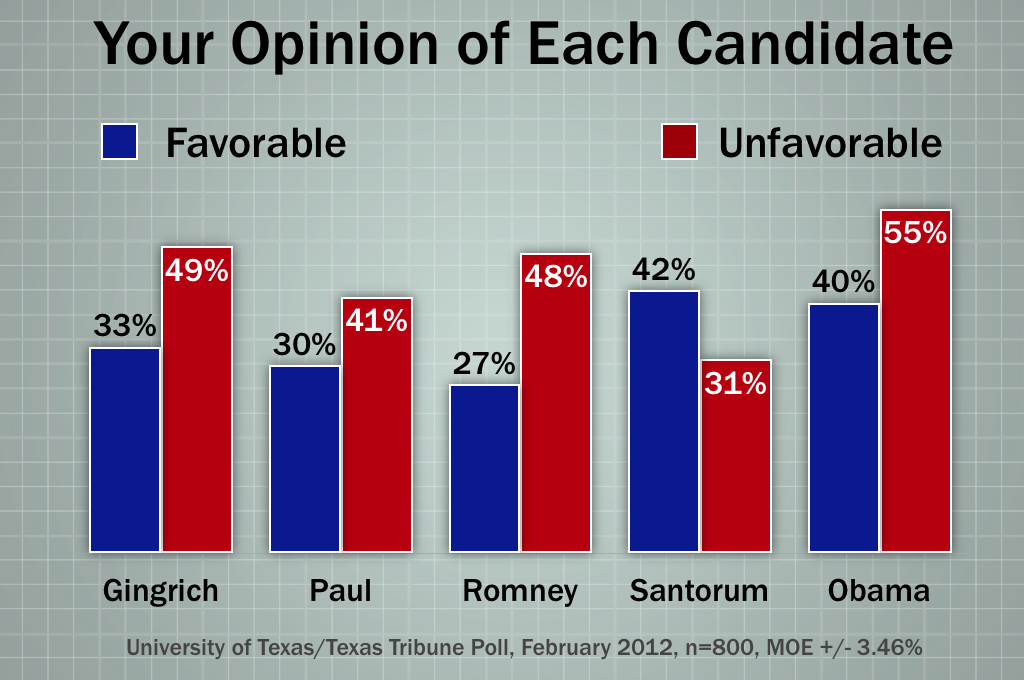 Obama had relatively high favorable ratings — 40 percent — but also had the highest unfavorable grades, at 55 percent.

"Three or four months ago, I thought Republican voters were just looking around, that they didn't just dislike Romney, but that they thought there might be a better option. I don't know that you can think that anymore," Shaw said. "I think it's pretty clear that they're not just looking around in a way that would allow them to ultimately come back and settle with Romney. They seem to have looked at him and rejected him. They will not settle for the guy." 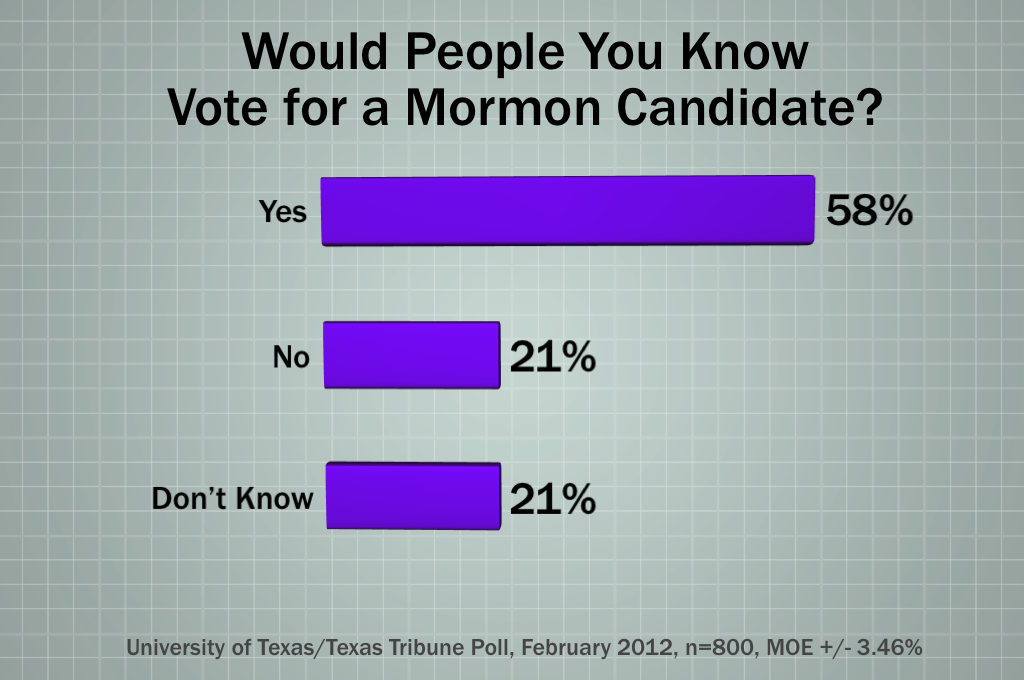 The pollsters repeated a question from the October 2011 survey, asking voters whether the people they know would be willing to vote for a Mormon presidential candidate who agrees with them on the issues. Romney, the off-and-on front-runner in the race, is a Mormon and hopes to become the first member of that faith to win the White House. More than half — 58 percent — said yes, while 21 percent said no and another 21 percent said they didn't know or preferred not to answer. In October, the answers were 53 percent yes, 23 percent no and 25 percent didn't know/no answer.