Lt. Gov. David Dewhurst is the overwhelming favorite of the insiders in the Republican race for U.S. Senate, collecting 84 percent to Ted Cruz's 14 percent. Former Dallas Mayor Tom Leppert was the choice of 2 percent and 1 percent chose don't know as their answer. These choices on the list (from the roster of filed candidates, in case you're seeing a name or two for the first time) got zeroes: Glenn Addison, Joe Agris, Curt Cleaver, Ben Gambini, Charles Holcomb, Craig James, Lela Pittenger, and "another Republican candidate".

Most of the government and political insiders — 68 percent — think the Tea Party has too much influence on the GOP. Five percent chose "too little" and 22 percent said it's just about right.

Overwhelmingly, the insiders said the people they know would vote for a Mormon candidate who agrees with them on the issues. Only 9 percent said no.

As always, we have attached the full list of verbatim comments; a sampling, and a list of this week's respondents, follows: 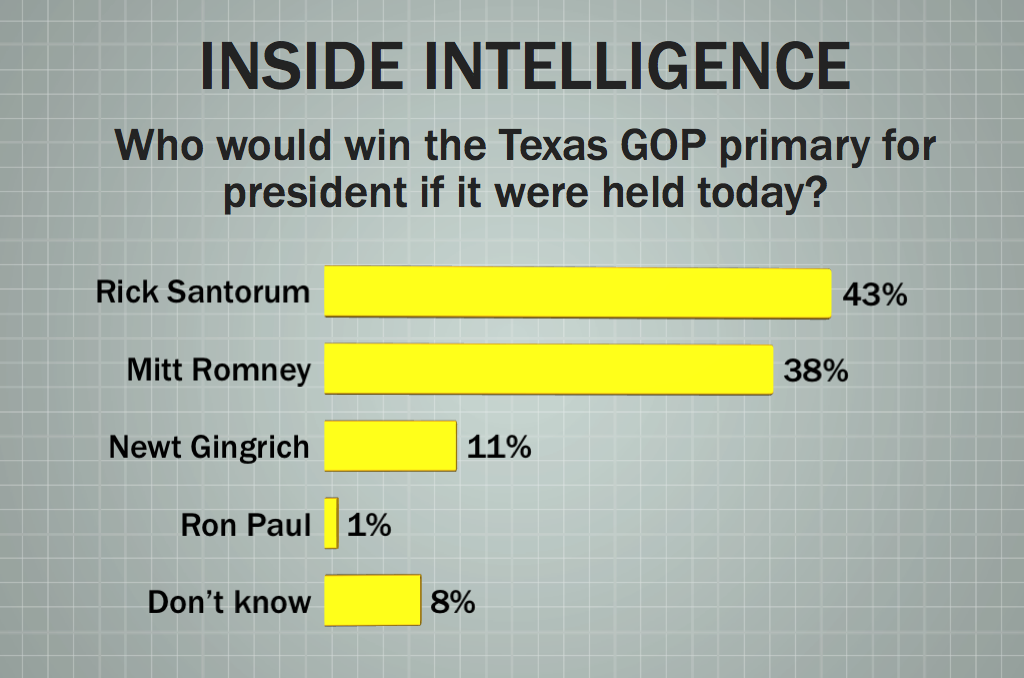 If the 2012 Republican primary election for President were held today, which of the following candidates do you think would win the GOP Primary in Texas?

• "Every dog gets his day, and this one's Santorum's. But in June, who knows?"

• "Santorum is the last conservative still standing in the GOP primary."

• "Gingrich has gone cold, Romney is still lukewarm and Santorum is the hot ticket right now."

• "Santorum's got the edge with the God/guns/gays voters that weigh so heavily in our GOP primaries, but the D crossover vote could negatively impact him."

• "Wouldn't be Romney. Would be the right wing flavor of the month."

• "Santorum is in line with Texas conservatives, but would mean defeat for GOP vs. Obama"

• "Texans want to vote for a winner. This year, that person is Romney." 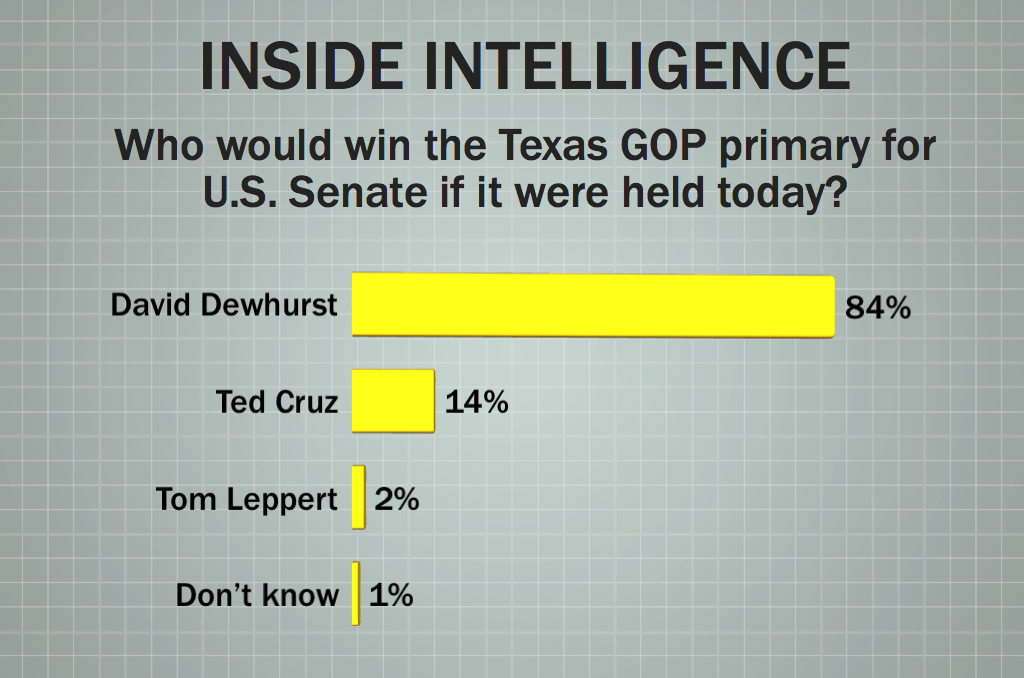 If the 2012 Republican primary election for U.S. Senator were held today, which of the following possible candidates do you think would win the GOP Primary in Texas?

• "Dewhurst has too much money, name id and record with the voting public to not be the chosen one."

• "Cruz and Leppert are hoping for a run off with Dewhurst, but at the end of the day it's Dewhurst's to lose."

• "The movement conservative activists may be enamored with Cruz right now, but the 2010 primary for Texas Railroad Commission demonstrated once again that GOP rank and file primary voters still won't vote for a Latino surname."

• "The only thing Dewhurst has is money, and lots of personal money to buy this election, but Cruz will get out the Tea Party vote and surprise a lot of people. Since there isn't a set date for the primary, Cruz has plenty of time to pick up more endorsements and votes. Time's ticking away Dewhurst!"

• "However, in West Texas, voters may scratch out Craig James and write in Mike Leach."

• "I see a massive stimulus package for Texas TV stations coming from our lieutenant governor." 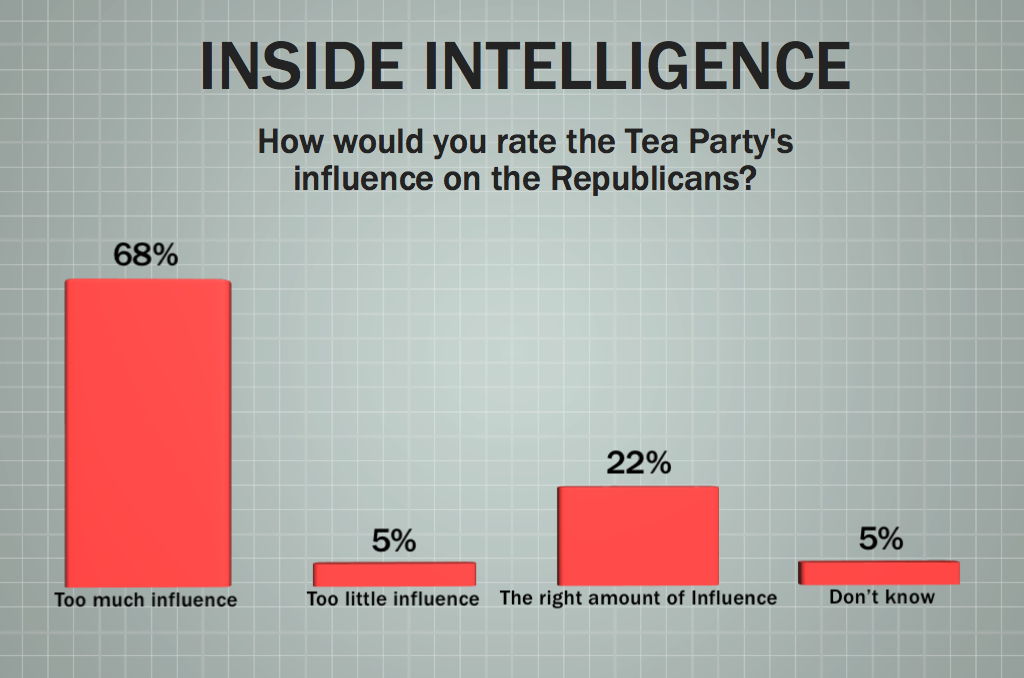 • "If one looks at the overall impact the Tea Party movement has with voters, it is marginal. Their influence resides in dictating the dialogue and perception."

• "They are a small but vocal minority of the Republican Party and are perceived as having influence when in reality whatever influence they have is minimal."

• "Too much Influence and too little understanding of state government fiscal conditions."

• "The longer the Texas primary is delayed the more influence the tea party will have."

• "The movement has lost some juice, but many Republican officeholders remain terrified of it."

• "Anyone who believes this state delivers too many services is living in an ideological fantasyland."

• "Only a manifestation of the larger and increasingly prevalent phenomenon: the true believers run the political parties. A sad commentary on our times."

• "Too much influence on policy relative to electoral standing during the session, but they have not seemed that much in evidence of late." 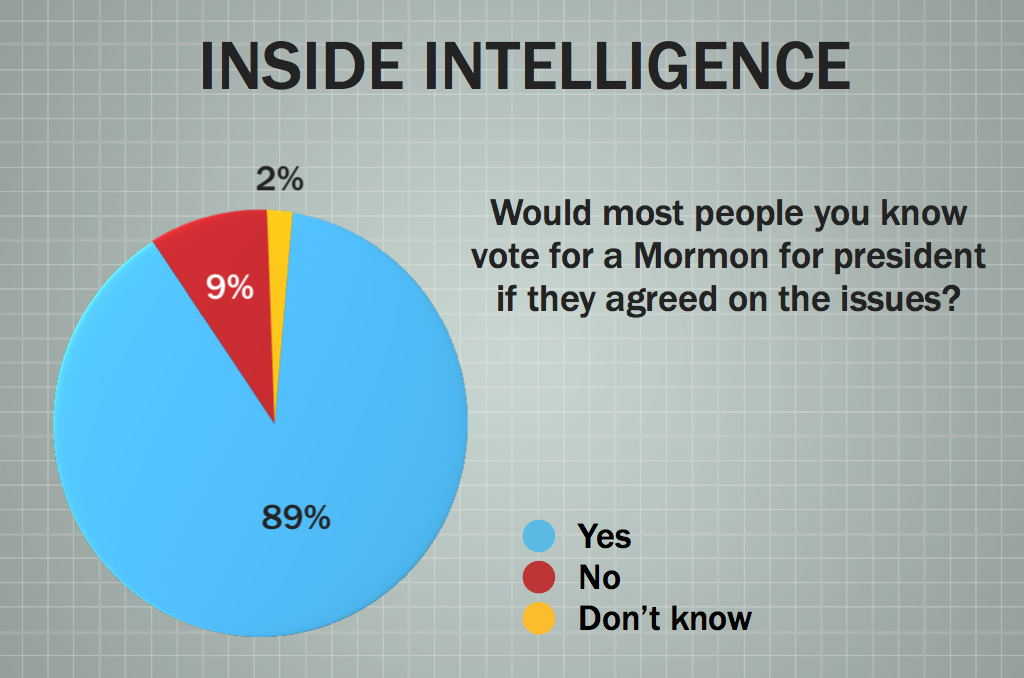 • "People will say one thing in public, and do something completely different in the voting booth."

• "People I know would, but then I don't personally know those in the nut faction."

• "Mormon is NOT the issue with Romney, but his LIBERAL record is. Most of my friends like Mormons and consider them good people, but Romney's record defies the faith he espouses."

• "Yes. What's that saying? 'Better to be ruled by a wise Turk than a foolish Christian'? I think that holds true for most people in metropolitan areas."

• "Most people I know would, but I don't think the majority from my rural Texas home town will be as open minded."

• "Would most people I know vote for a presidential candidate if they believed burning bushes talked?"