With Texas politics in a state of suspended animation, we asked the insiders about the groups that will be behind some of the candidates in this year's primaries, whether those are strong forces or weak ones, and what sorts of candidates will prevail.

Party activists are the most influential group in primary elections, according to the insiders who responded. Business groups were next, followed by ideological organizations.

Third-party ideological groups of whatever stripe have only moderate influence in the primaries, according to 42 percent of the insiders. But one in three believes the groups' influence is high; one in five believes it's low.

Half of the insiders believe trade groups and political action committee have a high level of strength in the primaries, perhaps an indication of the occupations of many of the insiders. Another 43 percent say those groups have moderate influence, and only 8 percent think the groups' influence is low.

As always, we've attached the full set of verbatim comments to our questions; a sampling follows. 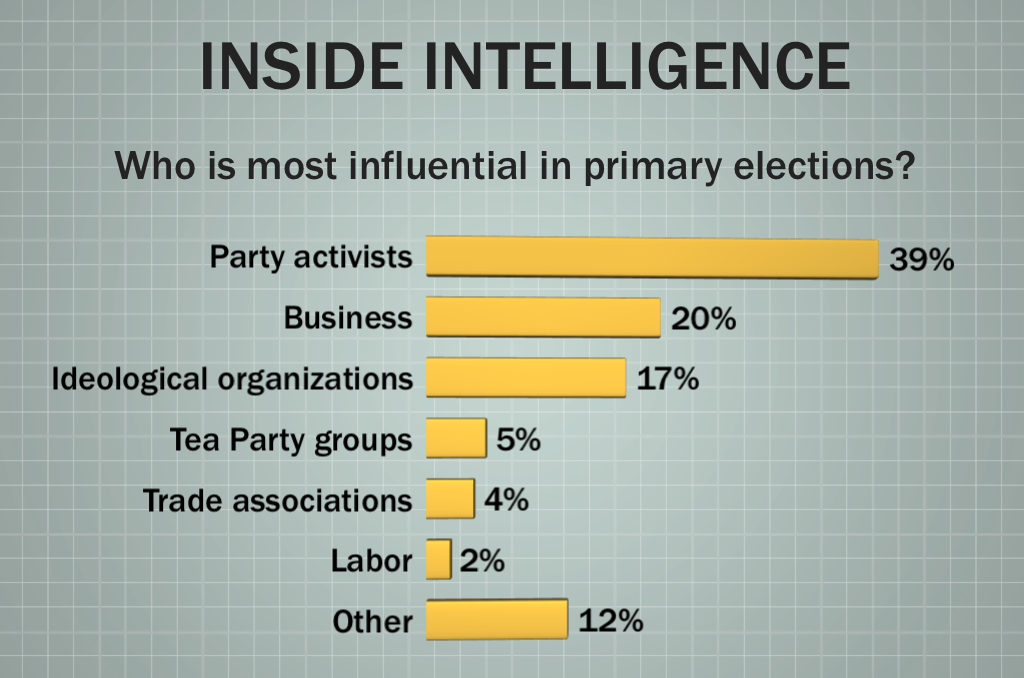 What group or interest is most influential in Texas primary elections?

• "Money, from whatever source."

• "Lobby cartels who direct 2/3 of all campaign contributions."

• "It is not possible to segment out groups and organizations as single-focused.  The overlap between ideological groups and pragmatic groups is significant.  Most social conservatives are also fiscal conservatives.  Most are very pro-business.  And they advocate for all.  Message development is complex because these issues overlap with other groups.  If groups were segmented cleanly, campaigns would be very easy." 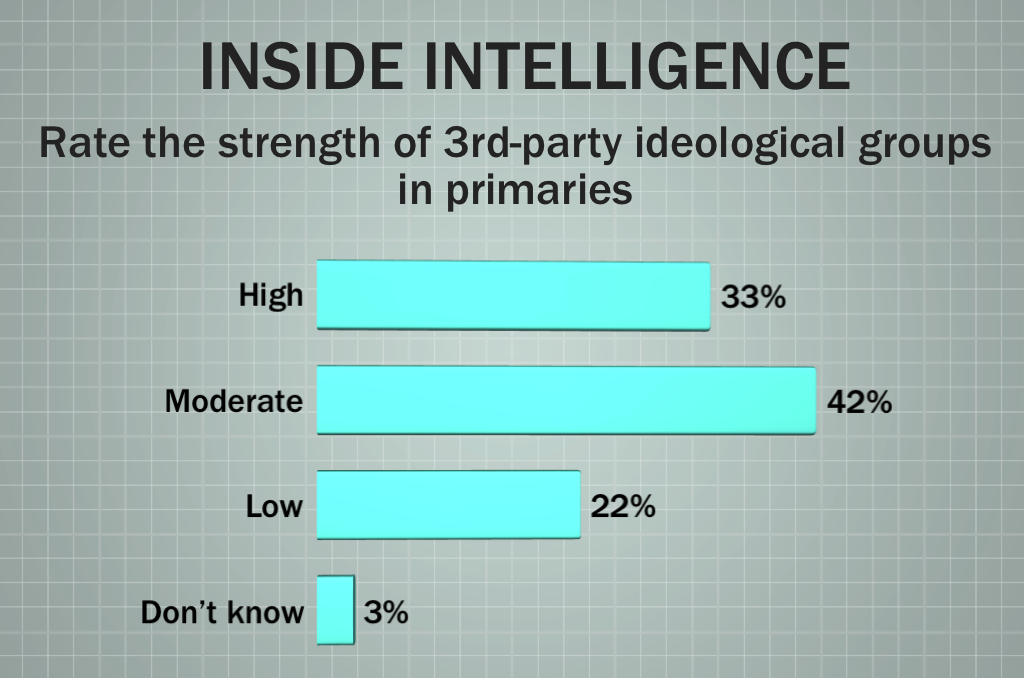 How would you rate the strength of third-party ideological groups in legislative elections in Texas?

• "Because they can dominate Republican primaries, which is where the action is."

• "The strength and influence of third-party ideological groups was strong enough to convince moderate Republican legislators to take more extreme positions to ward off possible challengers. What did they get for compromising their principles? Ideological conservative primary challengers."

• "Some incumbents overestimate their reach, ironically granting them exaggerated influence"

• "In a tight race they make the difference."

• "GOP right-wingers and tea party seem to rule the recent GOP primaries, which currently is all that matters in this messed-up state."

• "In some districts these groups have the ability to "disqualify" or defeat a candidate by rejecting them — or just smearing them."

• "Not as significant as they think, but meaningful." 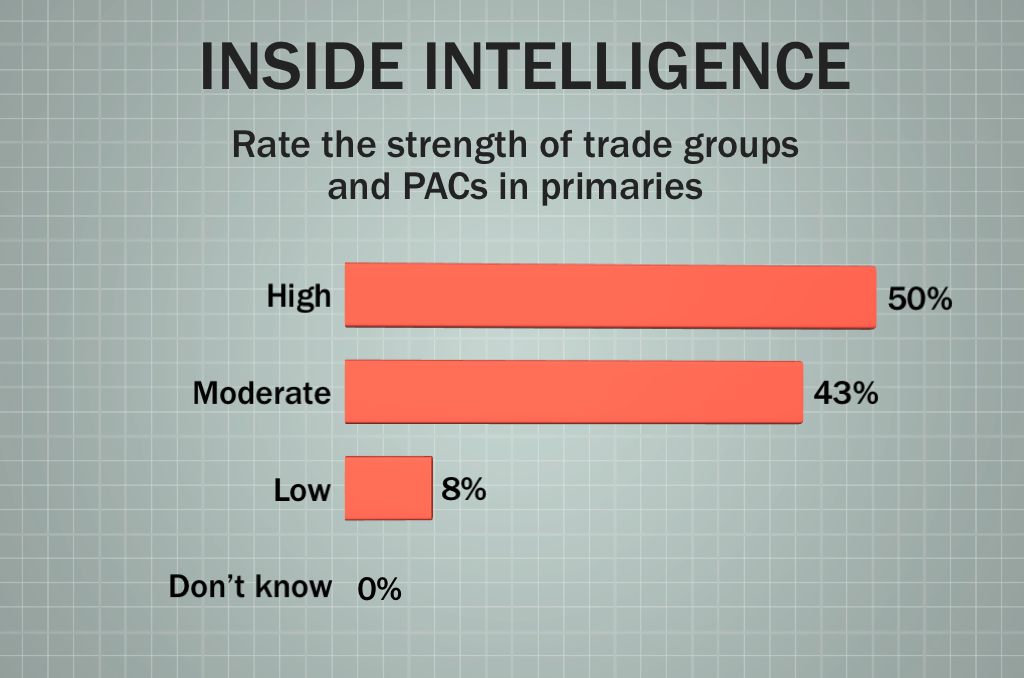 How would you rate the strength of traditional third-party groups like trade associations and political action committees in legislative elections in Texas?

• "In the absence of other readily available information, people turn to their associations.  They are not as influential a force as they were 20 years ago."

• "Except for the NRA, trade associations don't mean anything.  PACs are good for money and if they are generous, can be strong, but not because of their name."

• "TAB, TLR and others traditionally strongly support Republicans, whereas the Dems are primarily funded by the trial lawyers.  Many candidates would not be in office were it not for receiving funds and support from groups like these. ... Also, don't discount the effect of wealthy individuals whose checks can match or exceed those of many trade groups and PACs."

• "It can be "high" in certain races, and those are often the more-publicized situations, but overall it is moderate."

• "Too high. The unlimited cash drives the focus immediately away from voter education and directly to voter persuasion." 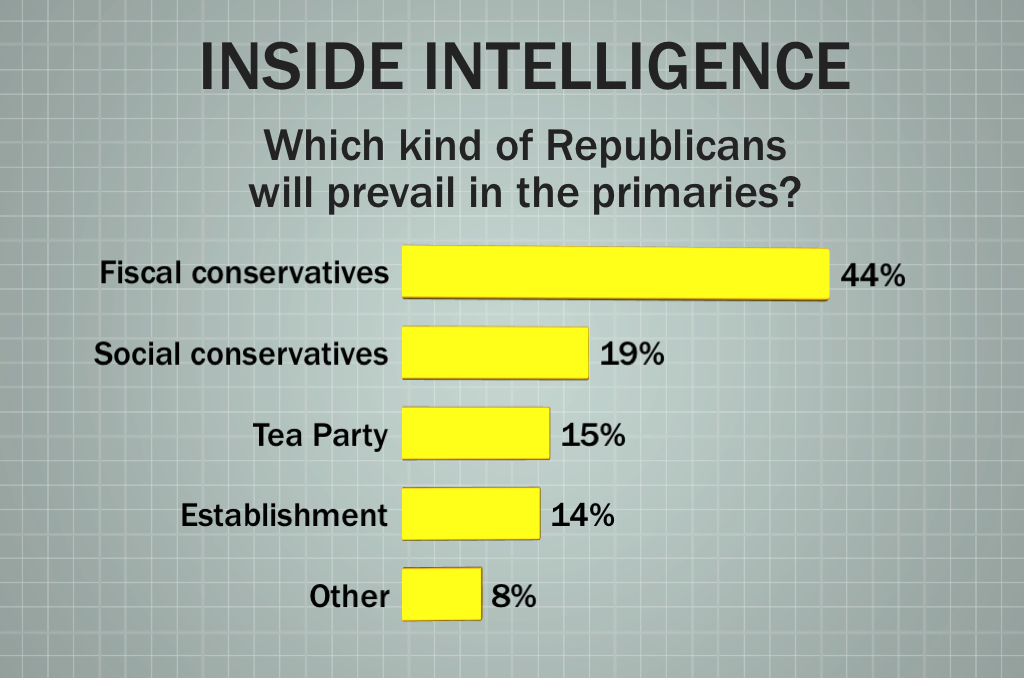 Which kinds of Republicans will prevail in primary races this year?

• "Social conservatives may be the only ones who are paying enough attention to know when the primary in Texas will be this year."

• "GOP candidates kowtow to the nutty social conservatives. Until rational voters wake up and realize that governing is the point, this state will remain at the bottom of everything."

• "It depends on when the primaries take place, and whether or not they are bifurcated. There won't be much of a primary on the Democratic side, so speaking of Republicans. If there is a unified primary and the presidential nominating contest is still in play, that will favor more mainstream candidates down ballot. Other scenarios will benefit more hard-line candidates."

• "Taking KBH as the prototype "establishment" Republican, the winners this year will be an amalgamation of fiscal/tea/social, with little or no establishment in the mix."