With the courts in between decisions, we turned to the insiders for opinions about the coming primary elections, with three things in mind: Whether the state's opinion will matter in the presidential race, what a split primary would do to voter turnout and who might benefit, and when — in a perfect world — Texas should hold its primary elections.

The insiders are split down the middle on that first question, with 46 saying the Republican presidential nomination will be decided by April 3, the date currently set for the Texas primary.

The courts have talked about splitting the primaries, holding the presidential primary and the elections of party officials in April and delaying everything else on the ballot until later. Most of the insiders think voter turnout would suffer in both party primaries. What's more, 58 percent think the ideologues in each party would be the main beneficiaries, followed by 28 percent who think incumbents would benefit most.

We asked the insiders for comments as they went through the survey, and a complete set of their answers is attached. Here's a sampling: 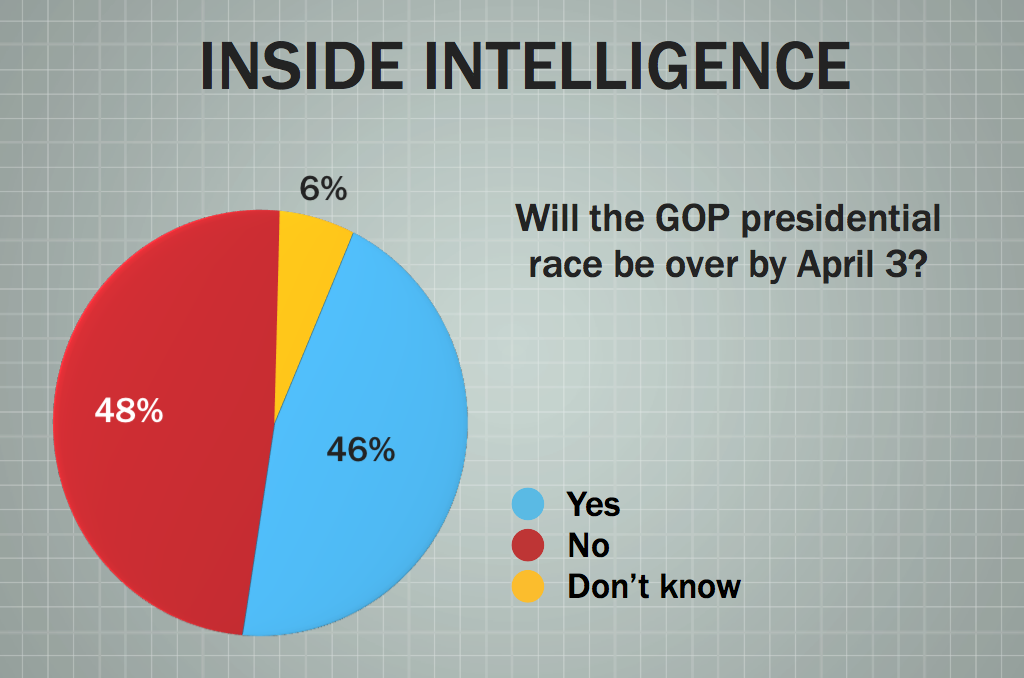 Do you think the race for the Republican presidential nomination will still be undecided on April 3 — the current date for the Texas primary?

• "Undecided in that Romney will not have the delegates needed to secure the nomination, but all but decided by then."

• "Technically, it will be undecided since Newt and Paul will still be in it. Practically, the race was decided last summer when Romney was the best thing to show up."

• "Romney will be a persistent winner with victory sweeps in February and major wins in March, but proportional allocation of delegates can drag the race on."

• "Only on paper -- in that it won't be decided mathematically. However, I think Romney should be a shoe-in by then. The problem is that Ron Paul and possibly Gingrich won't concede until they're mathematically eliminated."

• "Look back to '08 in the race between Obama and Clinton; it was well into June before Clinton decided to step aside and give up her delegates."

• "It's all over 'cept for the formalities."

• "Romney will wrap it up after Super Tuesday, March 6 -- the original date of the Texas primary"

• "I don't think it will be decided until the convention." 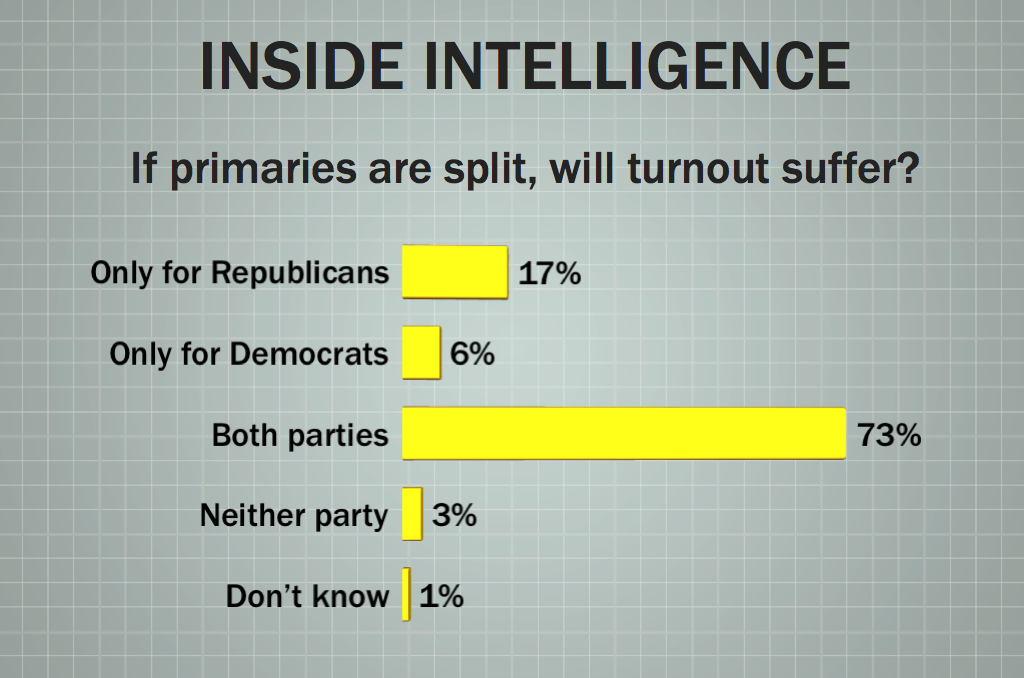 If the presidential primary is separated from the congressional and legislative primaries, will turnout suffer?

• "Turnout suffers most if primaries are pushed to the summer. But voter fatigue sets in with two primaries and a possible primary runoff for U.S. Senate."

• "Who is going to show up to vote for Obama in an uncontested single-office primary?"

• "Ain't all politics "local"? Congressional and legislative races will hold their own."

• "Americans like voting for the Top Dog, not the pack."

• "Hard enough to get people out for one election...imagine 2 within a few weeks? Fuggetaboutit"

• "No question about it. Our "presidential" primaries will have the turnout of gubernatorial primaries -- and likely worse (10-20%)"

• "Democrats don't have any races anyway" 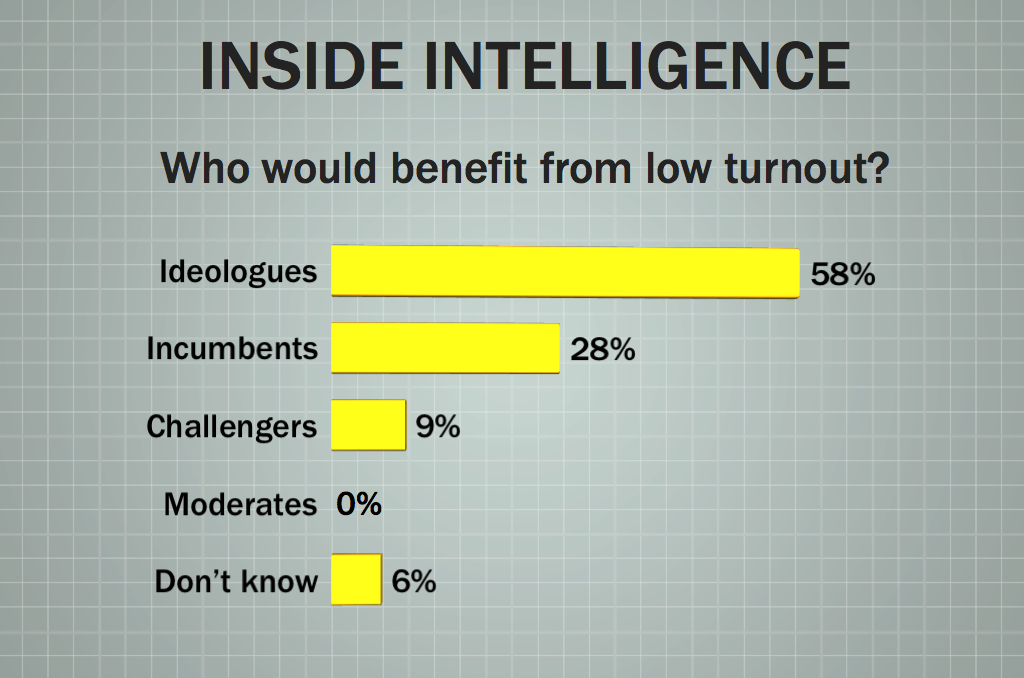 If turnout in the primaries is relatively low, who'll benefit?

• "Partisans are the group most motivated to vote."

• "A low turnout favors the most committed, who tend to be ideological"

• "Specifically, lower turnout in the GOP primaries this cycle appear to benefit incumbents or establishment candidates. Florida had a notable drop in turnout and was very establishment oriented of the early primaries. While there is very strong discontent among a vocal element on both sides, it doesn't seem to be translating into primary votes the way it did in 2010." 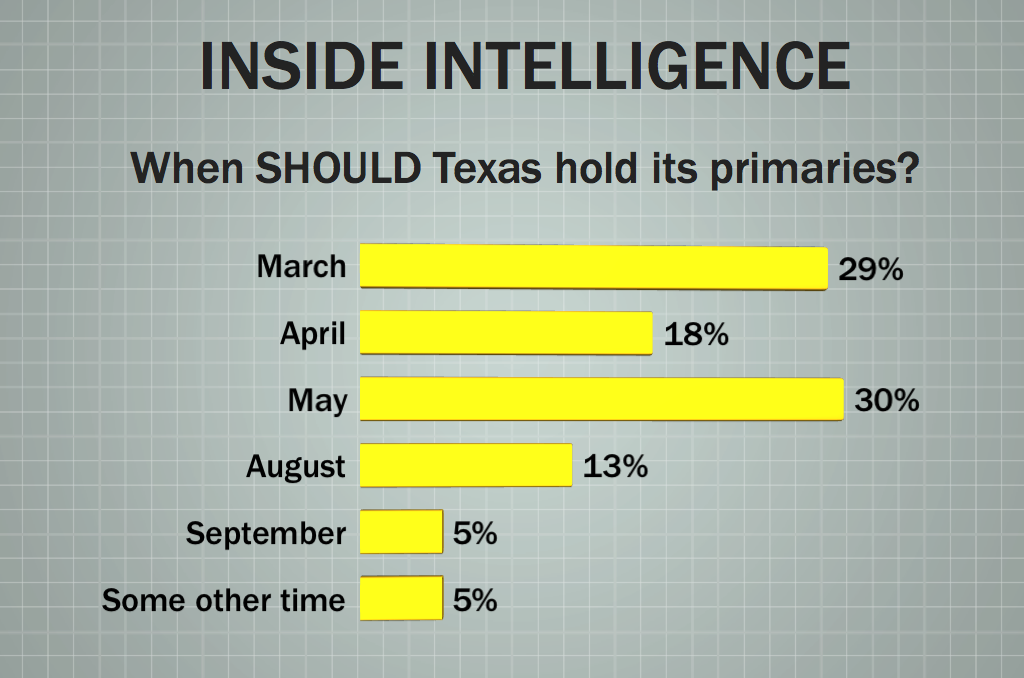 Redistricting has already delayed the Texas primaries once and could delay them again, raising an old question about when the primaries ought to be held. What's your preference?

• "It is an interesting trade out: shorter primary season or shorter general election season?"

• "Earlier means TX matters. The longer we delay the less important we become on the national stage."

• "Closer to the general is better, but realistically the latest it can be is May. No one would pay attention to a campaign over the summer."

• "We moved them up to be relevant in the presidential race, we haven't been. Let's move them back."

• "Primaries in March with a general in November means we get the summer off. Why mess with that???"

• "The date of the primaries is not nearly as important as the composition of the districts."

• "If Texas would adopt an instant runoff, I'd be for with early September. But the space required between the primaries under the MOVE act makes anything later than May unrealistic, unless you want to vote in the summer when people are often attending to other things."