We started off this week's survey of political and government insiders by asking why Texas congressman Ron Paul can't get into the front position in the GOP presidential primary. The overwhelming answer? His ideas, according to 78 percent of the insiders. Another 6 percent blamed his age (Paul is 76 years old); 4 percent put the blame on his competition, and 1 percent blamed the media.

We asked when Texas Democrats will become competitive in statewide elections (they haven't won one since 1994). A scant 3 percent of the insiders think that will happen this is the year. Another 23 percent say it'll be 2014, 26 percent say 2016, and the rest — 48 percent — say they don't know.

Education will be the dominant issue in Democratic primaries this year, according to 48 percent of the insiders. The economy, with 17 percent, was next, followed by state spending and health care/human services. Money topped the Republican issues, with state spending getting 28 percent, while 20 percent said taxes will be the big issue and another 20 percent said the economy will be the big issue. Immigration and education came next.

As always, we left space for the insiders to comment and have attached a full set of their verbatim answers. Here's a sampling: 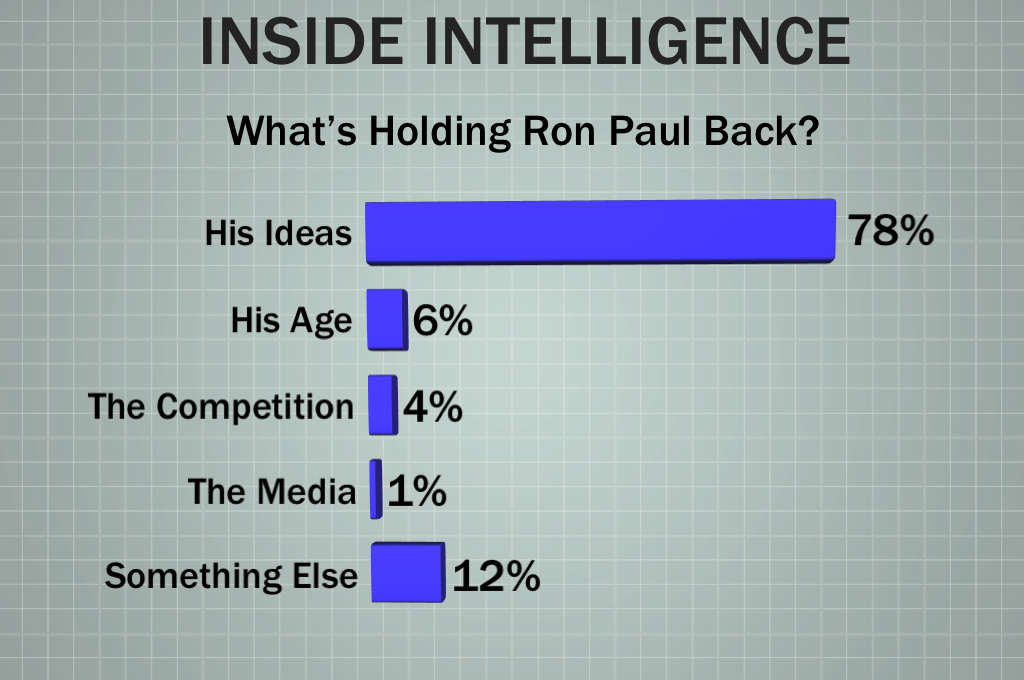 What is Ron Paul's biggest obstacle in the GOP primaries?

• "Wish I could combine several of these, because I think his age and ideas tie into the media narrative that has dismissed him. While his ideas really are not that out of touch, the media decided that they are, and that has sadly impacted his campaign. However, when he is on the stump and in front of voters face-to-face, he wins them over. He has a loyal and dedicated following, but it won't be enough to win the nomination."

• "He is far too intellectual for the majority of voters, yet for those that listen he articulates something that nearly everyone believes and also fears."

• "A lot of Republicans love half of what Paul has to say and hate the other half."

• "Way too out there on wars and foreign relations"

• "Actually, this needed an all of the above option."

• "His 'cereal' supporters — there are too many fruits, flakes and nuts in that bowl."

• "Ron Paul is simply out of step with the great majority of Republican primary voters. His following, while loyal, is limited." 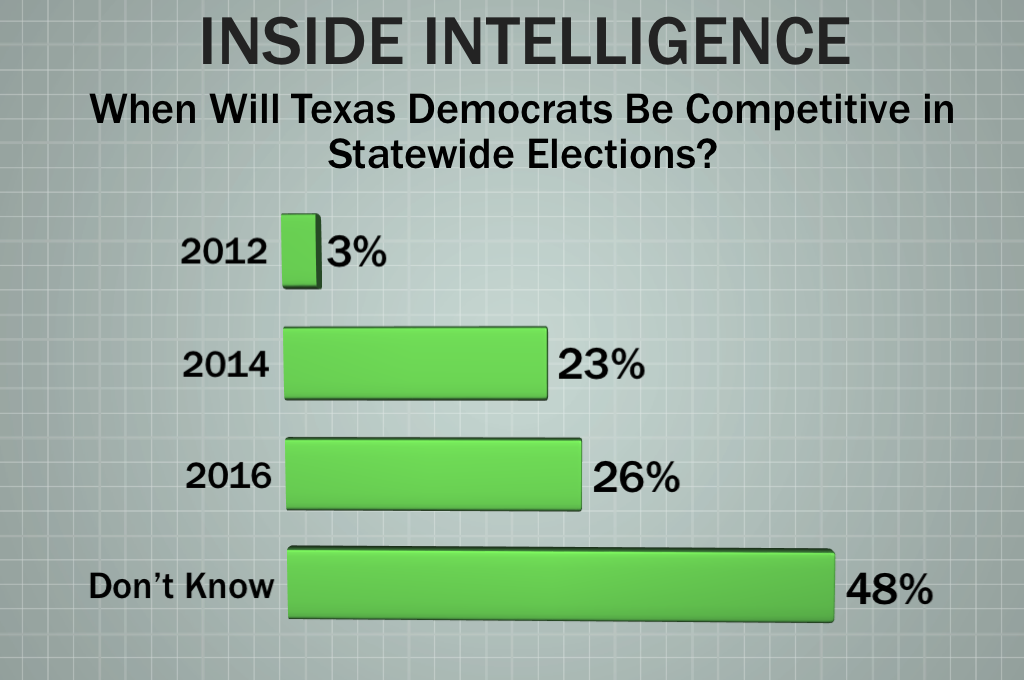 When will Texas Democrats be competitive in statewide elections?

• "Demographic/voter studies since the 80's have been pretty accurate as to shifts in voting trends thus far (see Rs in early-mid '90s); those same studies have consistently pointed to 2014-2016 as the point where Ds take back statewide offices. While the economy and other national events might have slowed some of this shift, especially for working class whites, the Rs certainly aren't doing much if anything to slow the continued solidification of the Hispanic voting bloc, so the voting trend predictions should generally hold."

• "Not until they find a way to be probusiness, particularly small business, in some way; find some message other than trial lawyer-supplied messages."

• "Dem failures are tied to structural and financial issues rather than ideology. With a strategy and a means to turn out the base vote, we will be competitive."

• "The pendulum is swinging back to blue."

• "They won't be competitive until they strike a more centrist tone with independents and the business community. And it would help if they found a source of funding that does not come from the trial bar"

• "Republicans have had a steady 12-point advantage for the last decade or so, and that will come down slowly. How slowly depends on the growth of Hispanic involvement. It's at least 10 to 15 years out."

• "When Hispanics start to vote in their numbers." 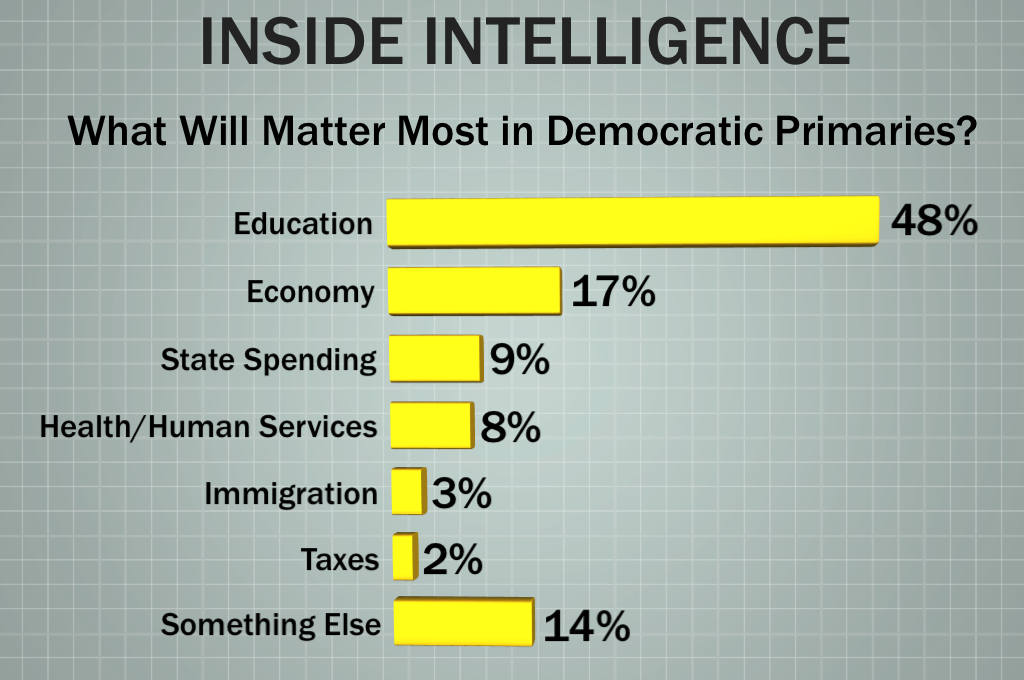 What will matter most in this year's Democratic primaries?

• "Highly variable — there is also a throw-the-rascals-out insurgency that is in both primaries but will be a function of local candidates and conditions."

• "Jobs and the economy are important and key issues for the Democrat and Republican voters this election cycle. Jobs/economy, education, immigration and health care will be the issues that matter to the Latino voters."

• "It'll be the holy trinity of the Dems: health care/human services, education, and protecting racial and ethnic minorities. You can't expect to win in a Dem primary without heavily emphasizing each of those equally."

• "D primaries aren't very competitive this year — nothing to fight over."

• "The Democrats' constituents have a higher unemployment rate than the general population. It should be jobs, jobs, jobs."

• "The Republicans handed the Democrats an enormous gift when they carved up the public schools." 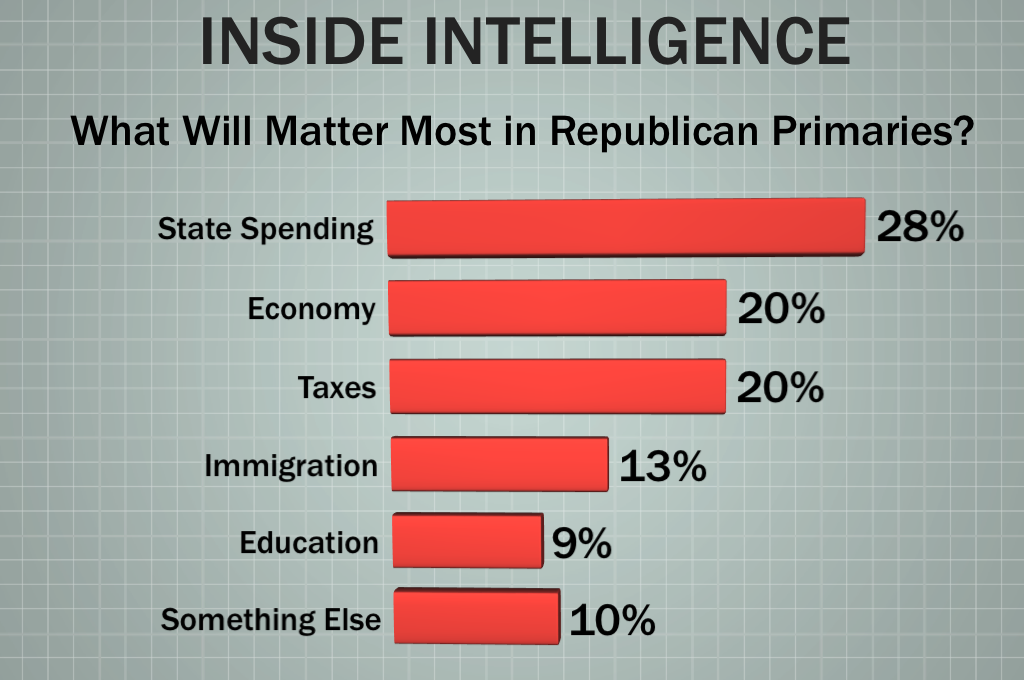 What will matter most in this year's Republican primaries?

• "My head hurts when I try to figure out what Texas Republican primary voters will do in statewide races, let alone in local district races."

• "Education from one set of challengers. Taxes and spending from another."

• "Trying to sound conservative without appearing clueless about how they're going to pay for the next budget after the state loses the education finance lawsuits."

• "The Republicans ran against Obama in an off year. They won't be able to help themselves this time around. It will be Obamageddon all the time."