Now what? This week, we asked the insiders what Gov. Rick Perry's reentry into state politics will be like (and, it should be noted, collected these answers before the governor dropped out of the presidential race on Thursday morning).

Almost all of them — 89 percent — said he'll remain in office, finishing a term as governor that's not scheduled to end until January 2015. But two-thirds of the insiders said the governor's power has been diminished.

A majority said the defeat will reduce Perry's power over Republican politics in Texas.

As always, we asked for comments and have attached the full list of verbatim responses. Here's a sampling: 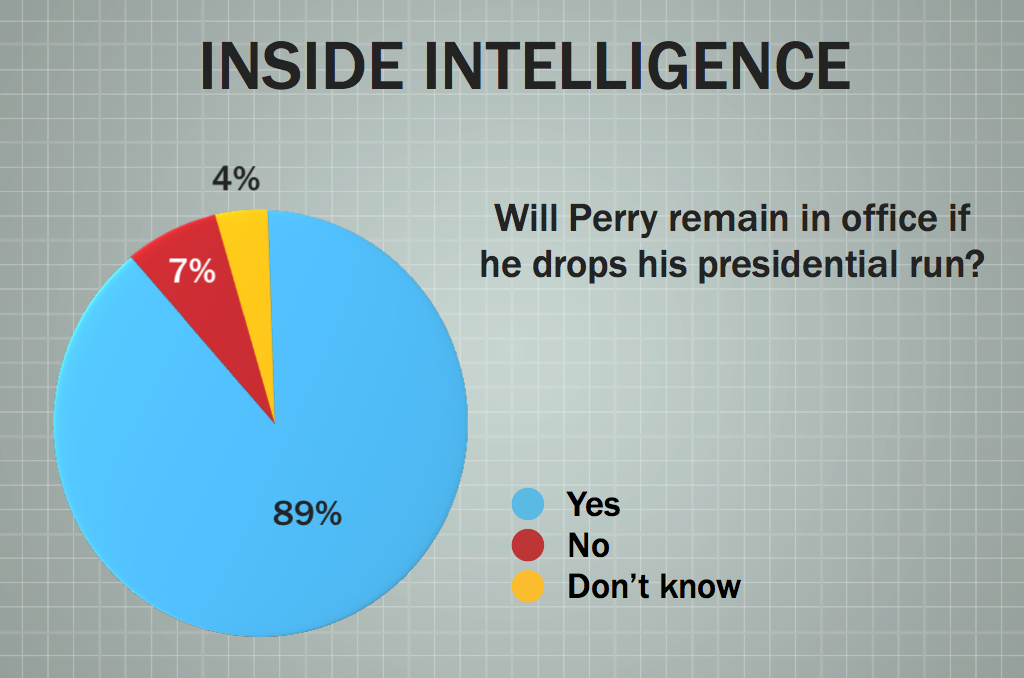 Will Gov. Perry remain in office if he drops his presidential campaign?

• "In fact, it's my guess that he will run again for governor."

• "Why not? Free house, free security detail, and a salary to supplement the pension checks."

• "He'll stay in office, but I think this will be his last term as governor."

• "What else would he do? The job has minimal responsibilities, adequate pay, and plenty of perks."

• "I think he will leave before the next session if he can - hopefully as President Romney's Secretary of Agriculture." 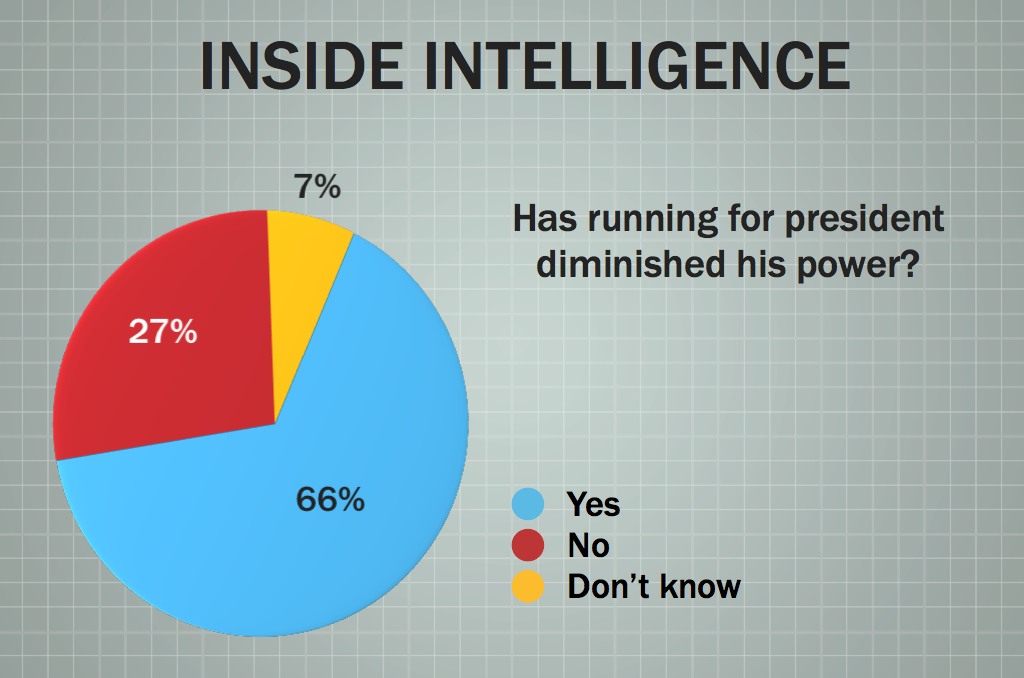 Has running for the presidency diminished his power in Texas?

• "Those who loved (or feared) him still love him. Those who abhorred him still do."

• "He has not only damaged his own brand, he has damaged the Texas brand. Texas will recover. It is not yet clear if he will."

• "He's been shown as an emperor with no clothes. No longer will ambitious Republicans like Greg Abbott continue to wait for Perry's next move."

• "This is the same individual whom some called Governor 39% just five years ago. He survived that, he can survive this."

• "Last I checked, he still has the veto power and the appointment power"

• "The aura of electoral invincibility is certainly gone, but he still wields the powers of the office and he has shown he is very good at that."

• "To the extent his power is based on people's perception of him."

• "Plenty of people are angry at his aggressive fund-raising tactics instate. He's also viewed as embarrassing the state with inept early debate performances. But he's still powerful because he's be governor during another legislative session in 2013." 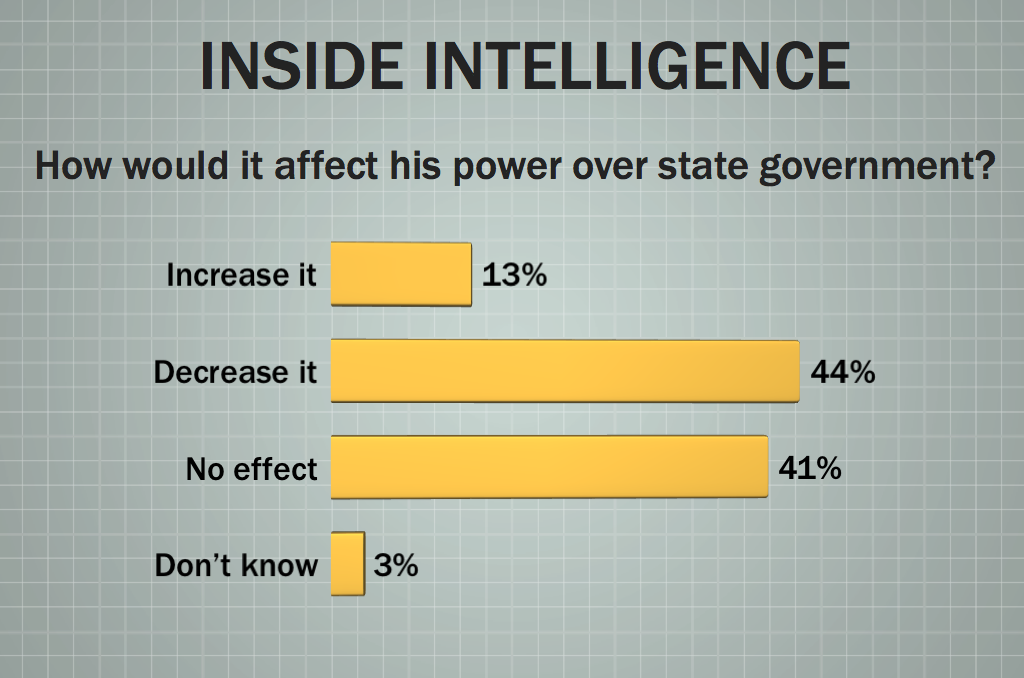 How would ending his presidential campaign affect his influence over state government?

• "He'll attempt to salvage his now-tarnished legacy by trying much harder to influence state government than ever before."

• "Might net out at zero. He'll be wounded in the Legislature but his appointees can still be effective."

• "He's now vulnerable to challenges on all fronts since it's clear he's not bullet proof."

• "He'll need to champion a bold, no-holds-barred agenda to re-assert himself and shore up his legacy."

• "He'll be paying a little bit of attention again." 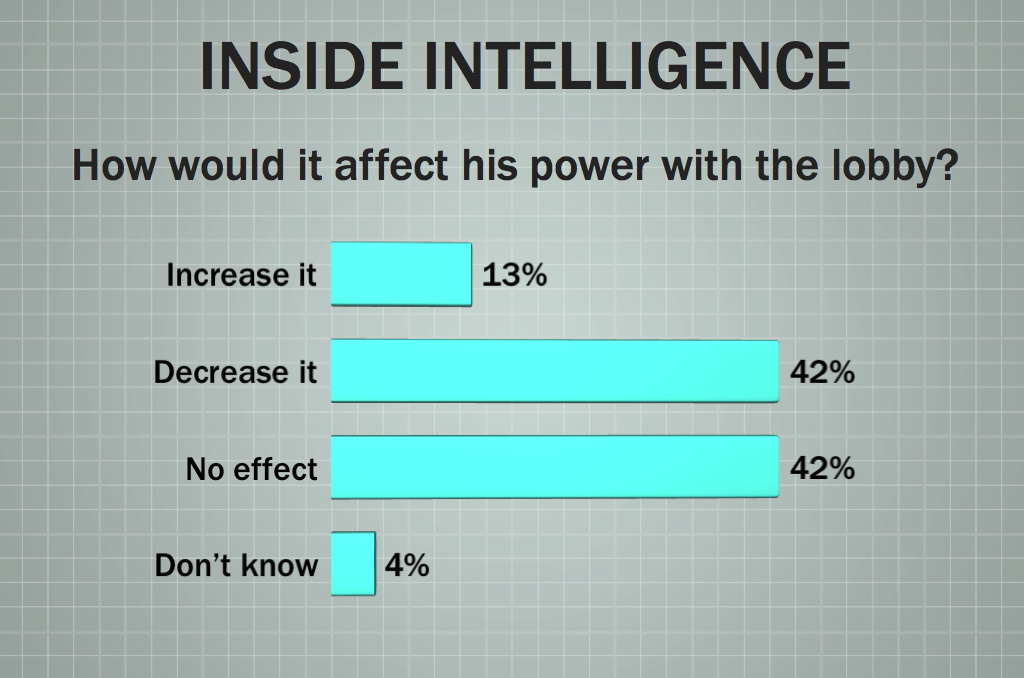 How would ending his presidential campaign affect his influence over the lobby?

• "It will have no effect in the sense that it won't change him. Thus, pity those who he perceives were not sufficiently helpful to him in his bid for the White House."

• "Still Governor. Influence over lobby will be reduced only if the Legislature no longer follows his lead."

• "Lobby will presume he has one more session to have say over their business."

• "After his national performance, the Governor doesn’t have a prayer of reelection in 2014. As a result, he’s essentially a lame duck. This will somewhat limit his influence over the lobby, but most will remain respectful and continue to play the game as they don’t want their bills vetoed. Now, where’s that list of lobbyists who flew to Iowa to support him…" 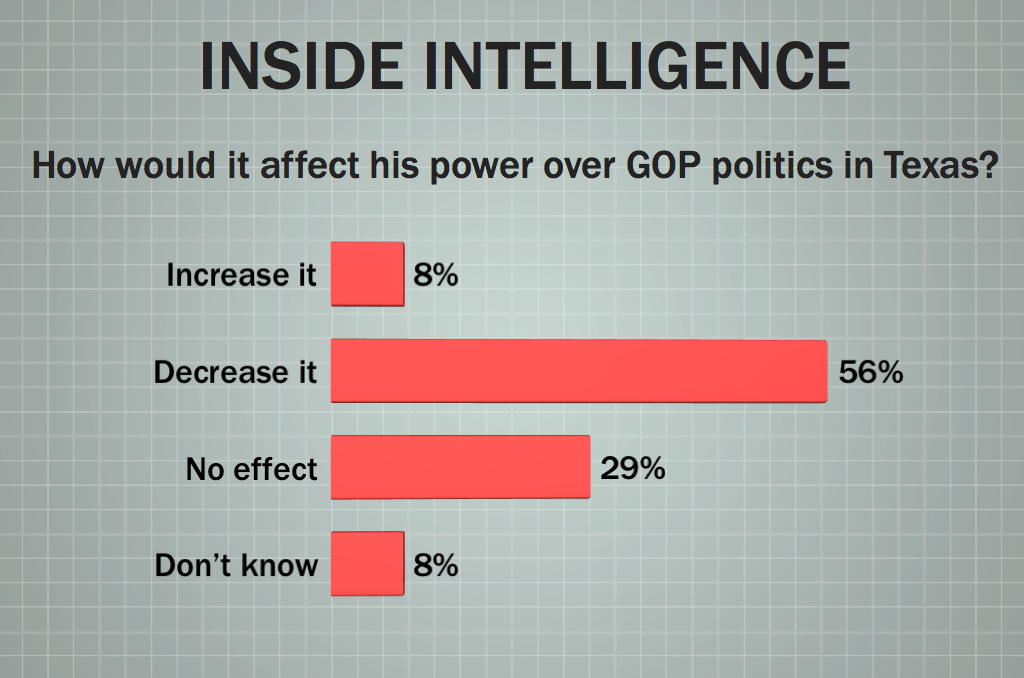 How would ending his presidential campaign affect his influence over Republican politics in Texas?

• "His power, short of getting elected President, was going to wane anyway. It's time for Governor Abbott in 2014 (at least if you ask the General), and it won't matter if RP is there or not."

• "Republicans like to talk about how "Republican" they are and Gov. Perry is good at that also."

• "Better than coming in behind Romney and Ron Paul in the Texas primary."

• "Ultimately, the impact of the less than impressive campaign is to diminish his currency with major contributors--and that may impact the Texas political landscape sooner than later."