For the first Inside Intelligence survey of 2012, we waited until the morning after the Iowa caucuses to see what the political and governmental insiders thought Gov. Rick Perry should do after finishing fifth there. Most, but not all, answered after Perry said he was coming home to Texas to "reassess" his candidacy and before he went for a run and tweeted his decision to stay in the race and press on to South Carolina.

It didn't change the view from here, however: 73 percent of the insiders say the governor should hang it up. About that same percentage lays the blame for his performance in the presidential race on the candidate himself; most of the rest blame his longtime political advisors.

An overwhelming 85 percent think Mitt Romney will be the Republican nominee for president when the primaries and conventions are over. A third of them think Perry should endorse him now, while 44 percent say the governor shouldn't endorse anyone.

As always, we asked for comments on some of the questions and the full set of answers is attached. Here's a sampling: 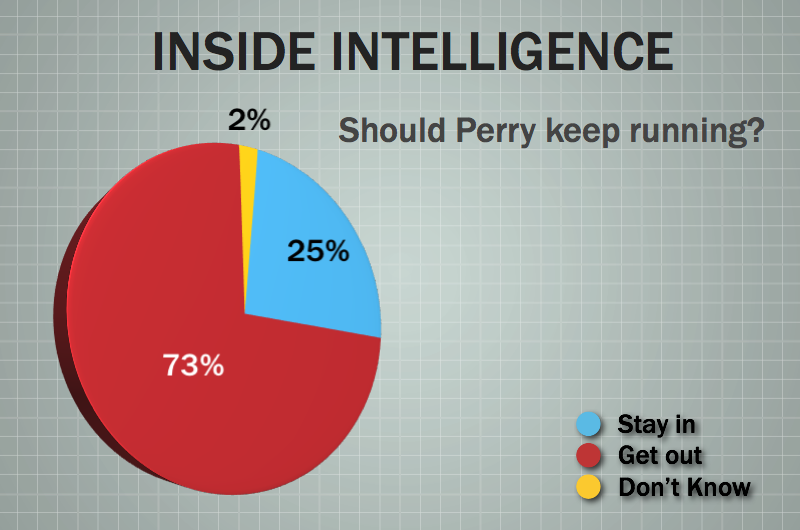 Rick Perry finished fifth in Iowa and is returning to Texas to 'reassess' his campaign. Should he stay in or get out of the race for president?

• "He needs to stay in....Gingrich has too much baggage, Santorum is too far right, and Romney can't get above 25% support within his own party. Therefore, a conservative southern governor, like Perry, could have a resurgence."

• "Rick Perry has never lost a race. In terms of his legacy and ego, he needs to finish strong with a win in South Carolina, or he is really going to be perceived as a lame duck governor. This is about redemption."

• "SC is a better test of his appeal. Plus he could set up for a cabinet position."

• "The non-Mitt candidate is still being sought. Why not stay and see if Newt's attacks end up helping Perry?"

• "He's as likely to emerge as the ultimate not-Mitt candidate as anyone and could perform very well in SC if properly funded."

• "He is not helping himself."

• "Oh please! From here on it's only about vanity, or maybe increasing future speaker fees."

• "At this point, the only person pulling for him to stay in is Mitt Romney."

• "In any other year, he would be finished. But this is an unprecedented campaign, and he certainly has less baggage than 'put folks like me in jail' Newt or 'no contraceptives' Santorum"

• "There's really no difference between staying in or getting out. He's already lost." 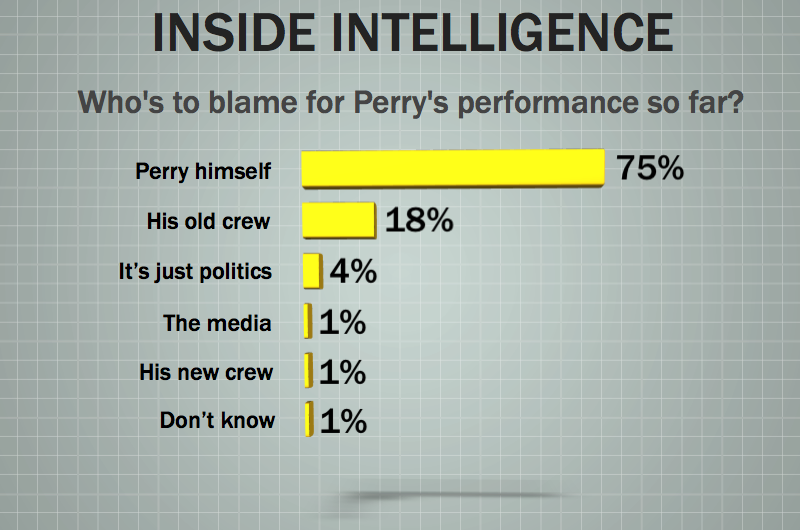 Who is to blame for Perry's showing in the race so far?

• "The 'Oops' moment rivals Admiral Stockdale for one of the most inept debate gaffes ever."

• "'Blame' is the wrong approach to understand what has happened thus far and why. The real question is what has Perry and his team learned so far, and whether it is possible to build a winning strategy going forward."

• "The blame part is less interesting than discovering just how resilient Perry is. The guy can just get back up and move on, over and over again. It's amazing."

• "He had early momentum. He had an experienced team. He had the money. Ultimately, it's up to the candidate to deliver - and he didn't."

• "The 'oops' moment will live forever. Bad debates were forgotten with his strong debates, but that one brain freeze knocked him to bottom."

• "He's not ready for the Presidency, and no amount of coaching and speechwriting can get him there this cycle."

• "The idea that what Perry has done to become and remain Governor would prepare him to be a Presidential Candidate was always absurd. He should never have been in the race."

• "Also: The Democrats (and maybe the media) for failing to push him hard in any election so far, leaving him unprepared for the big time."

• "Old advisors didn't do a very good job preparing him for the national scene, but it was HIS recurring poor performances in the debates and in front of the media that submarined any possibility of a viable campaign."

• "You can't whip a mule to a win in the Kentucky Derby." 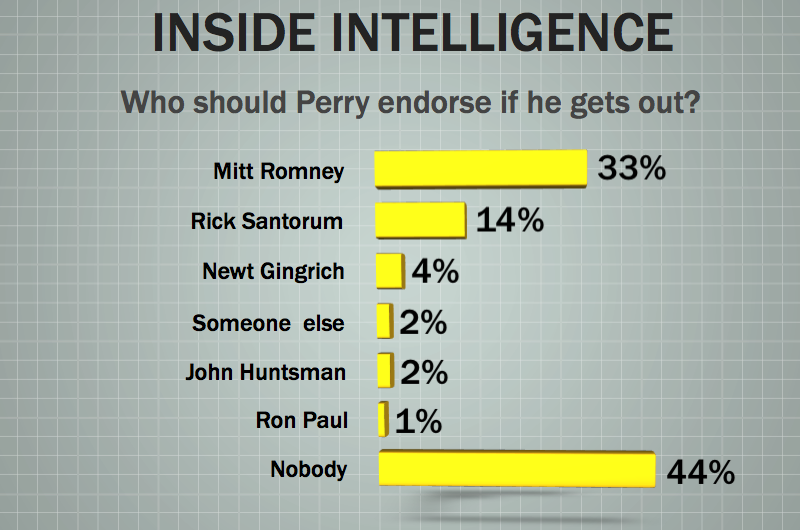 Who should Perry endorse if he gets out?

• "He should endorse a conservative candidate like Santorum, but the conservative alternatives to Romney are all unelectable. He would be endorsing a conservative loser, just like himself. This race will be over this month anyway. Romney will be the R nominee."

• "What's a Rick Perry endorsement worth?"

• "Eventual nominee. Might as well start the healing process early."

• "Wait for the field to stabilize and endorse before Super Tuesday and the Texas Primary!"

• "I'm not all that sure any of the remaining candidates would welcome Perry's endorsement."

• "Perry's endorsement would only carry weight in Texas, and by that time he'll still be in it to win it!"

• "He should strongly support and actively work for the eventual nominee, but no one before."

• "If he's looking out for #1 (himself), Perry will endorse Romney. If he no longer cares, then he'll endorse Santorum or no one."

• "If object of the game is to beat Obama, he should endorse Romney. Republicans have a golden opportunity, and are doing everything possible to mess it up." 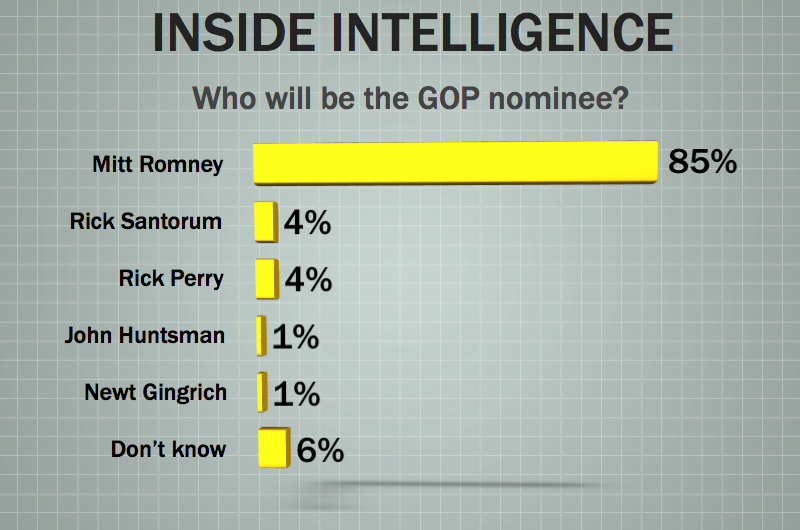