The state doesn't have maps for its congressional and legislative districts, throwing the date that was going to be a March 6 primary into question. The courts are looking at options that include moving all of the primaries to a later date, moving just the legislative and congressional primaries or moving everything except for the presidential primaries.

It seemed like a good time to ask the insiders about this. Most — 77 percent — say the primaries should all be done on the same date; only 21 percent think splitting the election is a good idea.

If the presidential primary is held as scheduled on March 6, will it matter? Will that still be a race or will the Republicans have chosen their nominee before Super Tuesday? By a 2-to-1 margin, the insiders think it'll still be a race by then; in their comments, they split on whether Gov. Rick Perry will still be a real contestant then.

If the primary elections are split, who wins? Incumbents, Tea Party candidates, and Republicans, in that order, according to the insiders.

As always, we asked the insiders for their comments, and the full set of answers is attached. Here are some excerpts: 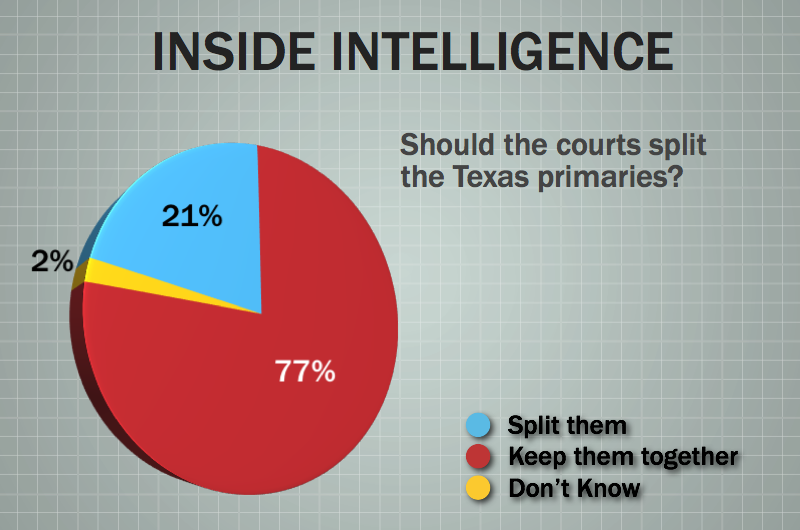 Should the courts split the primaries, with legislative and congressional elections later in the spring and everything else on March 6?

• "Let us not punish the rest of down ballot candidates for our failure to draw lines. It's middle of December and we still do not know what lines are going to be used. Time to move forward with a May primary."

• "Keeping them all one date is really the only fair way to do it, for taxpayers and candidates."

• "The vast majority of the competitive races are below the state legislative level. Pulling the rug on these local campaigns that have been underway for months because the State can't take care of its responsibilities is wrong."

• "You'd have to be democrazy to want to split up the primaries. Sorry... There's just no way to defend the idea to spend more money to make it harder for people to vote."

• "Too few voters turn out as it is.  The more dates, the fewer voters." 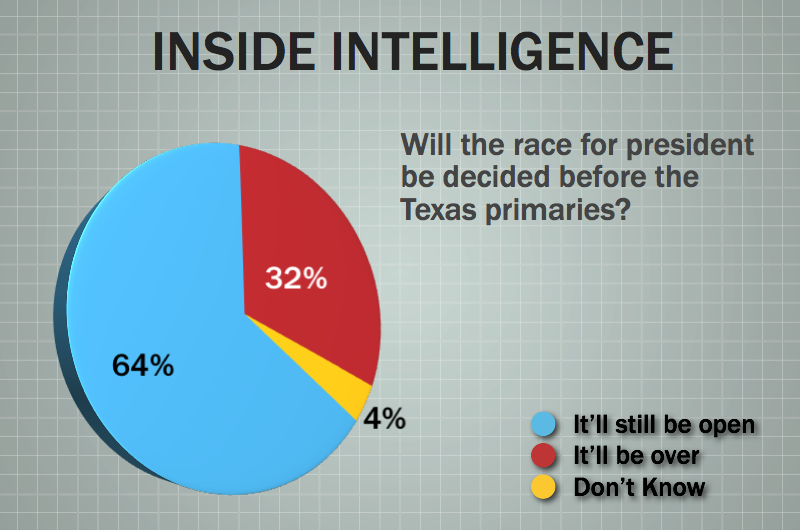 Will Texans, voting on March 6, have a say in who will be the Republican presidential nominee, or will the race be over by then?

• "It will still be wide open and that should be good news for the President."

• "The race may still be open but the governor may not be a major factor by that time."

• "With this field, the decision will be made at the last minute, probably by brokering between candidates or at the convention.  Only exception would be if Huntsman runs first or second in New Hampshire.  If that happens, he will capture the nomination."

• "You couldn't drag Ron Paul out of this race with a team of angry mules. He'll keep the race alive long beyond Texas."

• "Texans get their chance to loudly say who the Republicans nominate."

• "Perry will be long gone, but neither Gingrich or Romney will have the race wrapped up by March."

• "Iowa will not be conclusive and this makes New Hampshire less meaningful.  The fight in the South will take the race to Super Tuesday." 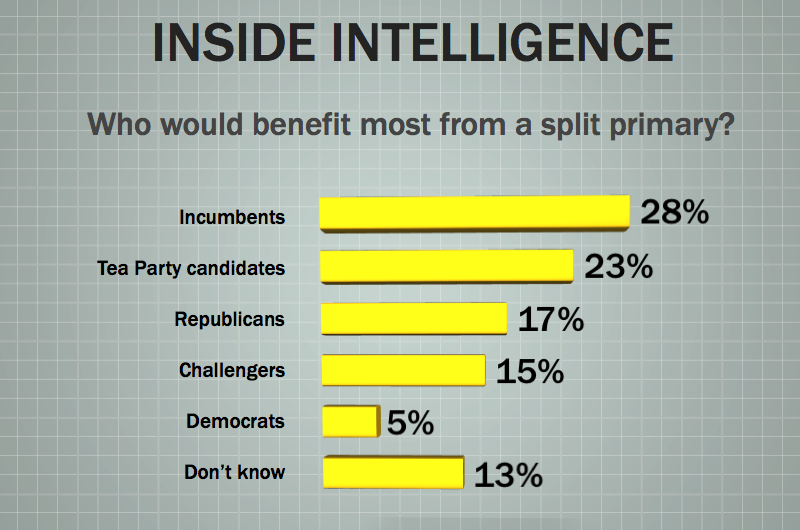 Who would benefit most from a split primary?

• "Don't incumbents in Texas always have an advantage?"

• "Looking back at Republican primary data (we don't have generals in TX), close to 65% of primary voters never had a prior primary history. These are the same dissatisfied voters that want change. They may come out in a presidential, but majority will stay home in May."

• "Unfortunately, the extremes benefit most from split primary as they are the most likely to turn out.  Bad for the state!"

• "Lower turnout in the primary should help the best organized interest groups in both parties.  That is always the case when turnout it low."