Lt. Joel Caldwell’s animal protection career began 12 years ago, when, as a deputy sheriff in Harris County, he responded to a call about a cat with an arrow through its body in a Houston trailer park.

On Thursday, Caldwell — now the police commander of Galveston’s Animal Services Unit — oversaw something just as disturbing: the arrest of a man for allegedly raising more than 300 cockfighting roosters in his backyard.

In May, Texas legislators passed a bill designed to help police officers in pursuit of illegal cockfighting. Forcing the birds to fight in the ring was already illegal; now, it is also against the law to breed the fighting cocks or show up to watch a fight.

Now, at the beginning of the first cockfighting season since the law’s enactment, legislators  and animal welfare activists are hoping for an unprecedented crackdown on the practice. But the law’s force will depend largely on the initiative of newly empowered police forces like Caldwell’s.

“Cockfighting has never received the attention it deserves from law enforcement,” Caldwell said, “because, up until May, the cockfighting laws were very, very, very weak.”

Caldwell, who is running for sheriff in Galveston, spent months planning Thursday’s raid, which occurred  in Santa Fe, Tex., a rural area on the mainland where cockfights and accompanying crowds are less likely to draw attention. 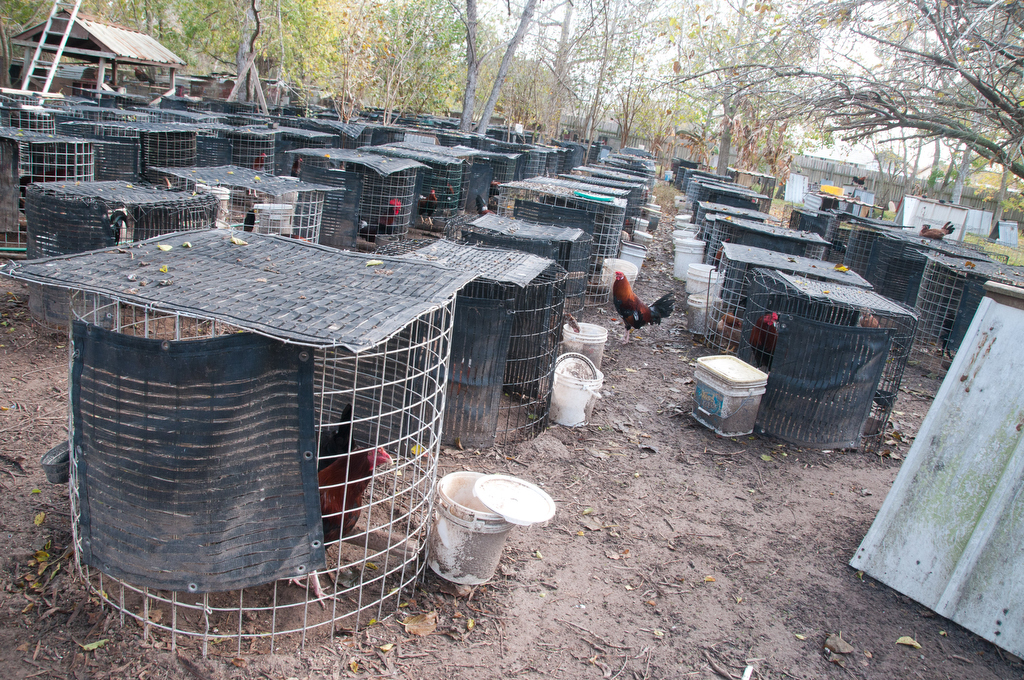 The breeder’s noisy backyard was lined with row after row of roosters tethered to shelters made of tin or chicken wire, said John Goodwin, director of animal cruelty policy for the Humane Society of the United States. Off to one side was a cockfighting pit, Goodwin said, and a workbench with a drawer full of long knives that had been fastened to the birds’ legs during fights.

On Wednesday, district attorneys working on the raid with Caldwell discovered a discrepancy between the penal and civil codes, which prevented him from seizing the 300 birds on site.

Until the last legislative session, cockfighting laws — enacted as long ago as 1907 — barred only the fighting of the birds. This meant the authorities would have to catch the individuals responsible for sending the roosters into the ring,  a difficult task at crowded cockfights.

“You’d go out there, you’d have 30 or 40 people, 2 would go to jail, and you’d wind up with all the roosters,” Caldwell said. “Not a good use of law enforcement resources.”

Under the new law, people who breed fighting birds, profit from a fight or own cockfighting paraphernalia with the intent to use it can also be charged with crimes.

For many, the laws are complicated by tradition. Lucio said he remembered being taken to cockfights by his father, at the time a deputy sheriff in Cameron County. “Fifty-five years ago, as a kid of 8, 9, 10, it was gruesome to see all the blood flowing from these beautiful birds,” he said.

Lucio said efforts to curb cockfighting would hinge on rural police departments, which must change their behavior after a century of turning their heads. “No one enforced it because it was a big cultural thing,” Lucio said of the previous law.

If recent raids are any indication, the new law’s impact is already being felt. During a raid on Sunday in Fort Worth, officers not only broke up a cockfight but also  — possibly for the first time — issued citations to spectators.

“The law is sending a very loud message to cockfighters that Texas is taking a stand on the issue,” said Nicole Paquette, the senior Texas state director of the Humane Society of the United States.

Caldwell said public opinion had shifted, and, with it, the law.

“Humans,” he said, “have evolved to the point where it’s not entertainment to watch two animals kill each other in a pit.”