Candidates started filing for the primaries this week, so the latest nonscientific survey of political and government insiders focused on what will separate Republicans and Democrats in their respective primaries, whether the Voting Rights Act that's at the core of fights over redistricting is still necessary and — since it popped up in a couple of candidate announcements as an issue to be addressed by state lawmakers — whether the Legislature should mandate an annual football game on Thanksgiving between the Longhorns and the Aggies.

The insiders think public education and state spending/taxes will be the divisive issues in the GOP primary, with immigration coming up more than a few times as another battleground issue. For the Democrats, state spending/taxes is at the top, followed by social issues. Several insiders mentioned tort reform as a fighting matter.

Most of the insiders think the federal Voting Rights Act is still needed to protect the rights of minority voters in Texas, but it's not an overwhelming majority.

And — because it has come up in campaign literature and candidate talks with local groups — we asked about football. Interesting, not one of our insiders chose "Don't know" when asked whether the state should mandate an annual game between Texas A&M and the University of Texas. The mandate is a bad idea, according to 89 percent. But a lot of them would still like to see the games.

As always, we collected verbatim comments from our participants and you can read the full set in the attachment. Here's a sampling: 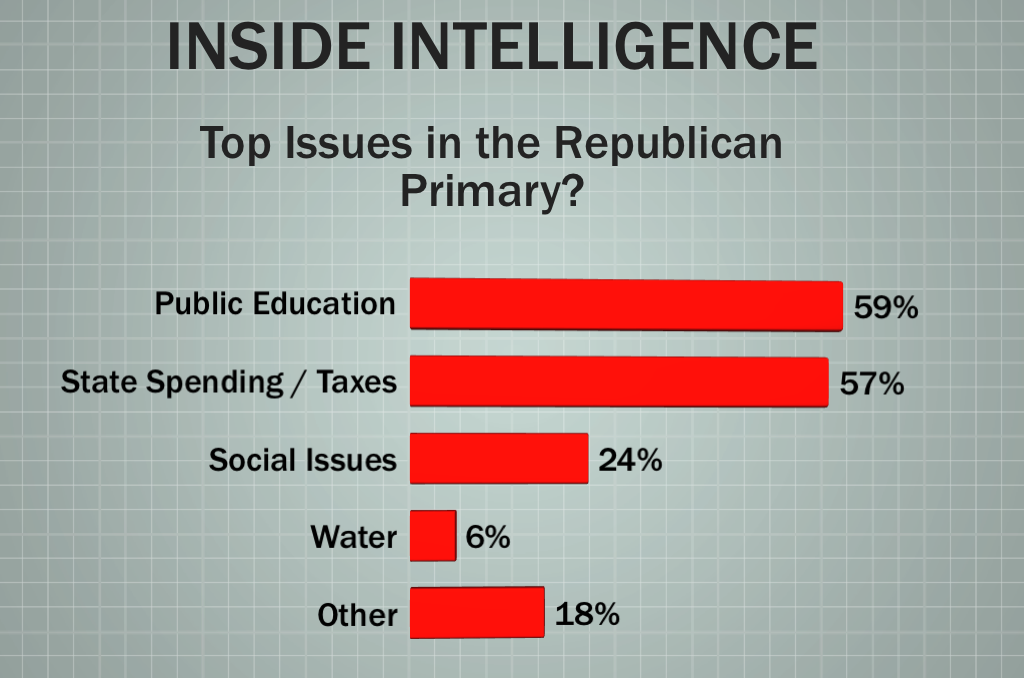 What issues will expose the most significant differences between Republican primary candidates?

• "God help Republican candidates who have to defend their votes on the budget and its accompanying cuts to public education. Soccer moms notice when little Janie's math class has 10 more students than last year."

• "Promises of "no new taxes" and the most conservative position on social issues will carry GOP candidates. We have returned to the 1950's on race and personal rights."

• "Tea Party influence will dilute the importance of social issues."

• "Rs will all be for low taxes and against spending. Public ed--whether to increase funding--will be the only difference between them (on the list)."

• "There will be no differences. Candidate will stick to the winning formula; sound bites that matter to the base. "A Conservative who will Cut taxes, Reduce Spending, and Get Government out of the way."" 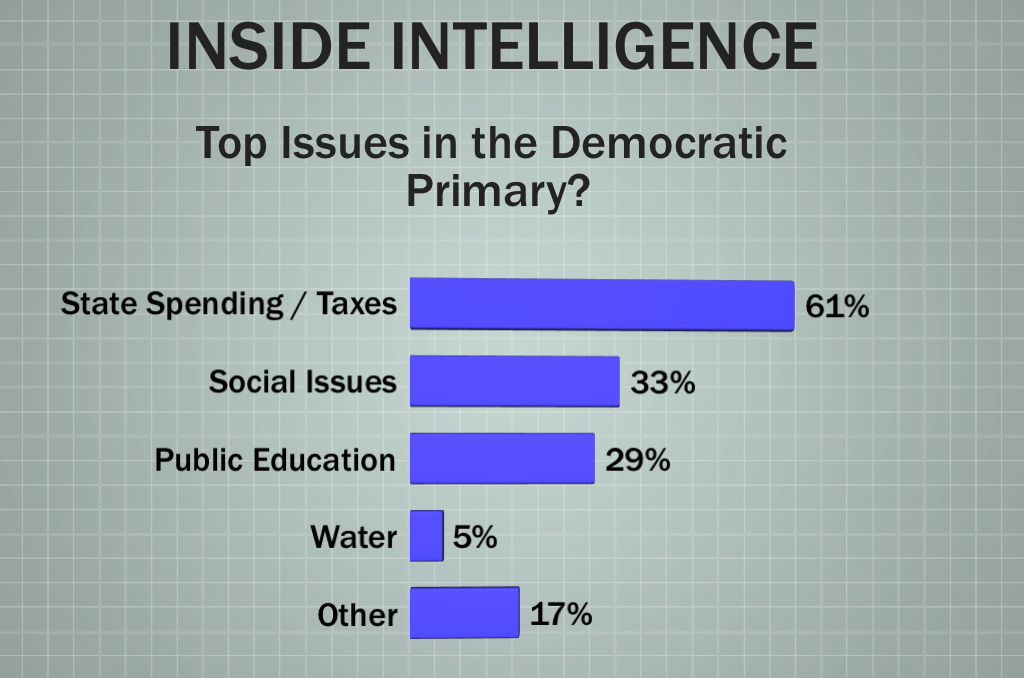 What issues will expose the most significant differences between Democratic primary candidates?

• "Same for Ds, though Ds will not have the pressure of holding the line on spending, but rather will be expected to be knowledgeable and explain how they will target/prioritize/advocate for health and education spending."

• "These are all fundamental differences."

• "Whomever positions himself too early for the General will pay the price in the primary. The millionaire & billionaire 1% argument polls so well among Democrats that not adequately supporting it will spell political death."

• "I don't see Democratic primary candidates having too many disagreements on the important issues."

• "I don't think there will be enough D primary battles to get a good sample on this question."

• "The current crop of D candidates won't vary much on the big issues." 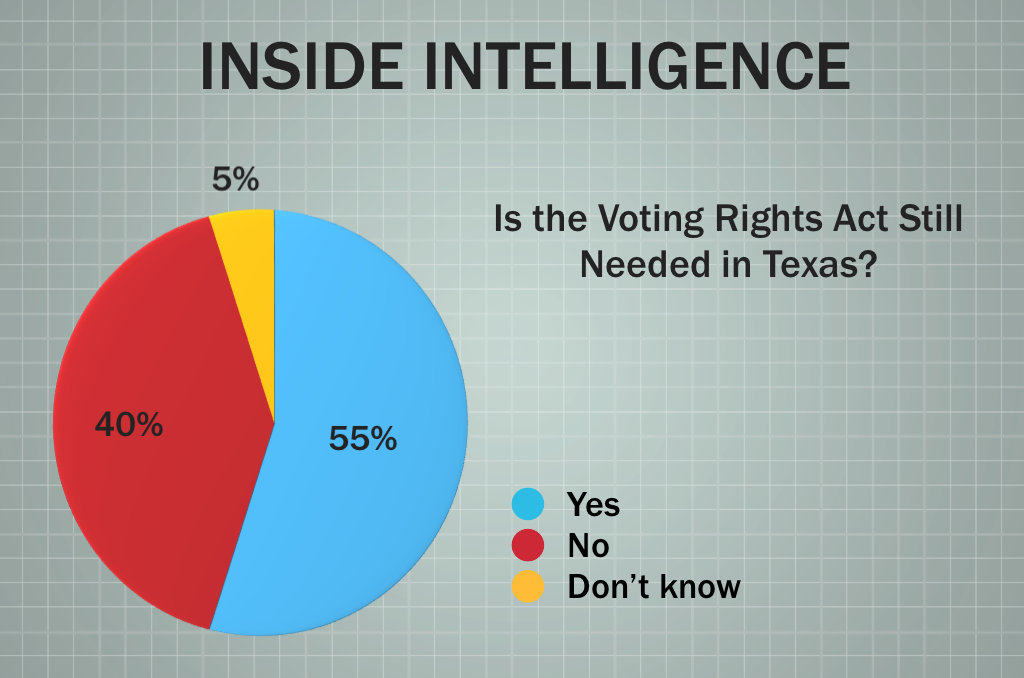 • "Yes, as long as Republicans continue to fight Hispanics rather than embrace our mutual interests."

• "Before the redistricting bills I would have said the voting rights act had accomplished its mission. The Texas Republican legislature proved me wrong."

• "With the state fast becoming a "majority minority" state there will be fewer and fewer reasons to justify continued review of voting rights. Watch out for disputes between Hispanics and African-Americans over protected classes!"

• "I think the Texas Legislature is living proof that left to their own devices they would limit the franchise and pour Clorox over the capital."

• "Not the part where judges come in and protect partisan interests, as opposed to voters rights."

• "Districts are not being drawn to prevent minorities from being elected. They are being drawn based on partisan outcomes."

• "The chief justice is black. I mean, really, we still need the a-ok from DC here? Plus, don't forget the significant investment by Rs to recruit and elect minorities." 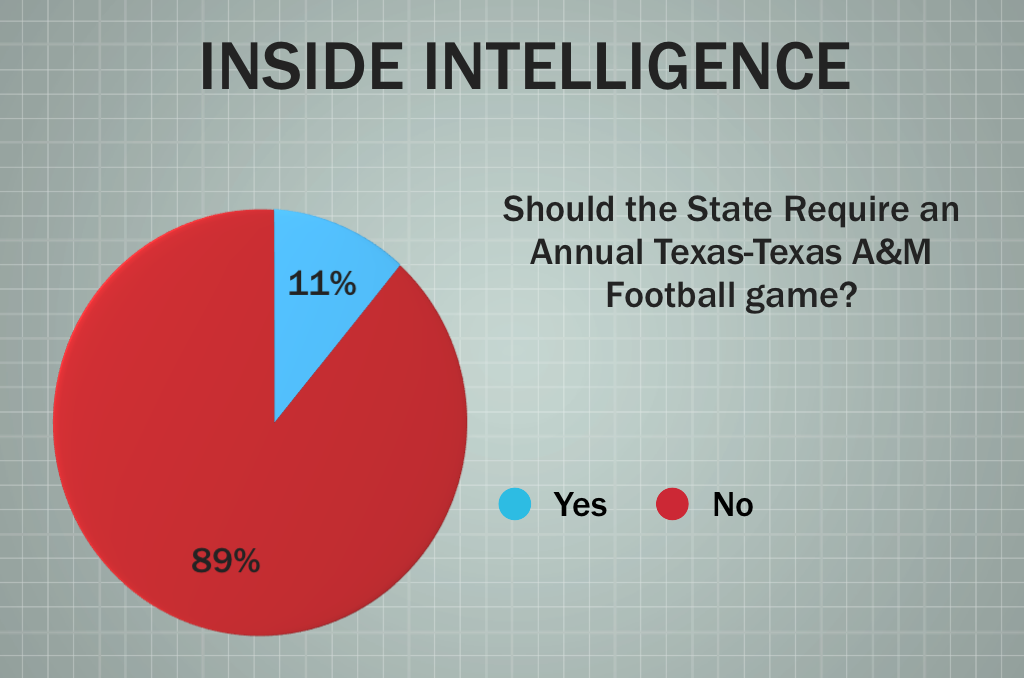 Should the state require Texas to play Texas A&M in an annual football game?

• "Hell no! Texas lawmakers need to stick to their core mission and not meddle in internal decisions regarding athletics. The problem with govt at the state and federal is mission creep. The leaders at UT and A&M will work it out over time, if it is best for them."

• "Idiotic question considering economic and political issues at stake. This may very well be the most important election nationally since 1860"

• "The Legislature should probably stay focused on the real issues of importance for Texas.... water, taxes, public education, transportation, etc. Deal with those first and then weigh in on the lesser matters. Plus who would want to mess the wonderful outcome of the last game! Hook'em!"

• "Once the state solves issues related to revenue, education (learning not sports), health care, child services, prisons, criminal offenses, immigration and the border, and 40 other areas of concern, then and only then should they spend time deciding what we should watch on TV on Thanksgiving."

• "I couldn't imagine a less important issue to occupy their time. So, of course, that means we'll blow weeks and weeks on it."