Gov. Rick Perry proposed term limits for federal judges and cuts in pay and work hours for Congress, so we put those issues to the insiders and added Texas questions: What about a full-time Legislature and appointed judges instead of elected ones?

We hit a nerve. Two thirds of the insiders think a part-time Congress full of people whose pay has been cut in half is a bad idea.

They're split on the judicial term limits idea. Perry proposed 18-year terms in place of the life terms served by most federal judges now; the insiders split almost evenly on that idea, with 45 percent in favor and 49 percent against.

Appointing Texas judges instead of choosing them in partisan elections also split the mob: Half are for it, and 40 percent are against. In their comments, several pointed out that most of the state's judges are initially appointed and then stand for election later.

As always, we've collected the insiders' comments and attached all of them in a separate document; a sampling follows: 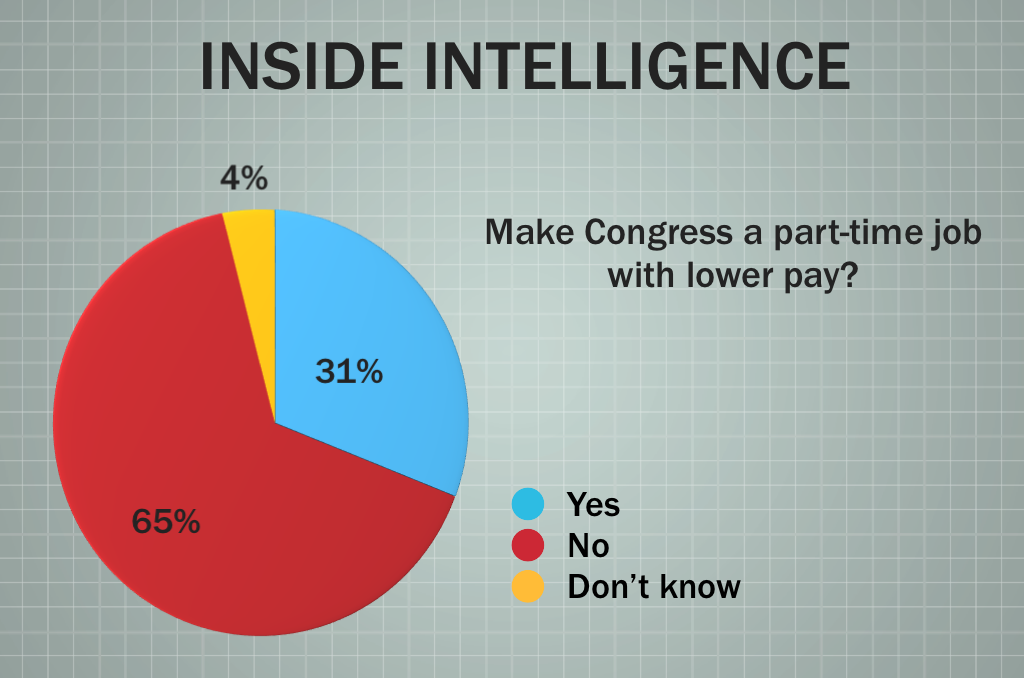 Gov. Rick Perry has proposed making Congress a part-time job, halving congressional pay, and allowing members of Congress to keep their private-sector jobs after they're elected. Is that a good idea?

• "NO way. Too many members of the Texas Legislature make their living off of what they do inside the pink building... they only get away with it because most turn a blind eye to it."

• "Part of this proposal has merit...the part about getting Congressional members out of D.C. a little more often and back to their Districts. However, if one looks closely at the Texas Legislature you will find: insurance agents doing the bidding for insurance industry; lawyers carrying water for their part of the legal profession; Doctors going over the top to deal with self interested matters; etc. Does anyone really want to see a Gary Elkins 'payday loan' type speech on the floor of Congress?"

• "It's the best idea Perry has proposed -- the logical next step after watching 'Mr. Smith Goes to Washington.' This move directly attacks the political class, which we all have reason to resent. Members of Congress are insulated from their communities and the marketplace -- Texas Congressmen make twice the average income of an average Texan. Their salaries and their insulation make it harder for them to empathize with regular people and they become even more manic about keeping their jobs. The longer they stay in Congress, the less likely they are to have a clue."

• "Representing people in Washington is a full-time job and it should be in Texas. Plus we don't need just the rich serving in Congress. We have too much of that now." 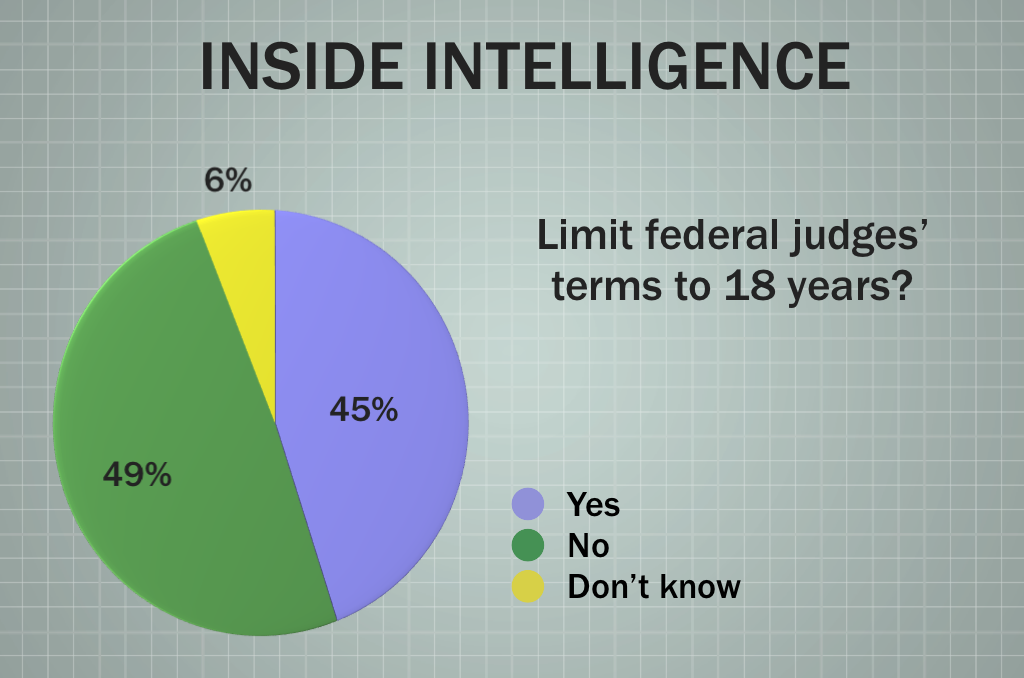 Another proposal would limit the terms of federal judges, from the Supreme Court on down, to 18 years (most of those are currently lifetime appointments). Is that a good idea?

• "In later years of their term, Judges would be to tempted to rule in a manner that may benefit their next job."

• "A federal judge can take your money, liberty and very life. Handing over that awesome power and responsibility to someone for life cannot be a good thing."

• "Judicial independence would then be as much of a fiction for federal judges as it is for those on the Texas Supreme Court."

• "The idea is to insulate and provide security so rulings are less likely to be influenced by outside influences."

• "That's probably a better idea than a part-time Congress, but can you imagine the tilt to decisions that would come in years 17 and 18 of a judge's term, in an attempt to curry favor for reappointment?"

• "Good lord, that means you serve 18 years and cash out in the private sector?" 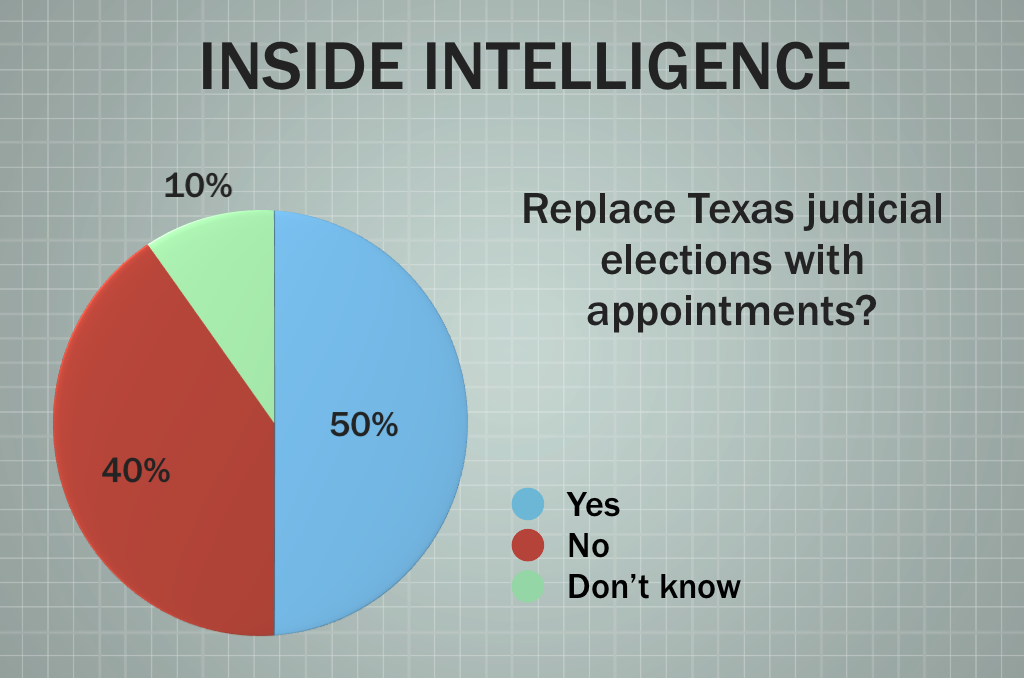 At the state level, some have proposed replacing judicial elections with appointments as a way of getting judges out of partisan electoral politics. Is that a good idea?

• "Too many candidates on the ballot. Nobody knows any of the judges.... all they know is party affiliation. Fewer people on the ballot would be beneficial."

• "It depends on who is doing the appointing."

• "Doesn't matter if its a good idea or not. Texans feel VERY strongly about electing judges. Might as well propose taking the big white star off the flag."

• "Crony courts? How is that a better idea?"

• "We have a modified version of that now with most Judges initially appointed to fill an unexpired term, then running for re-election. Provides some opportunity to un-elect a bad pick, but of course also allows good picks to be defeated."

• "Since when is political patronage a good idea?" 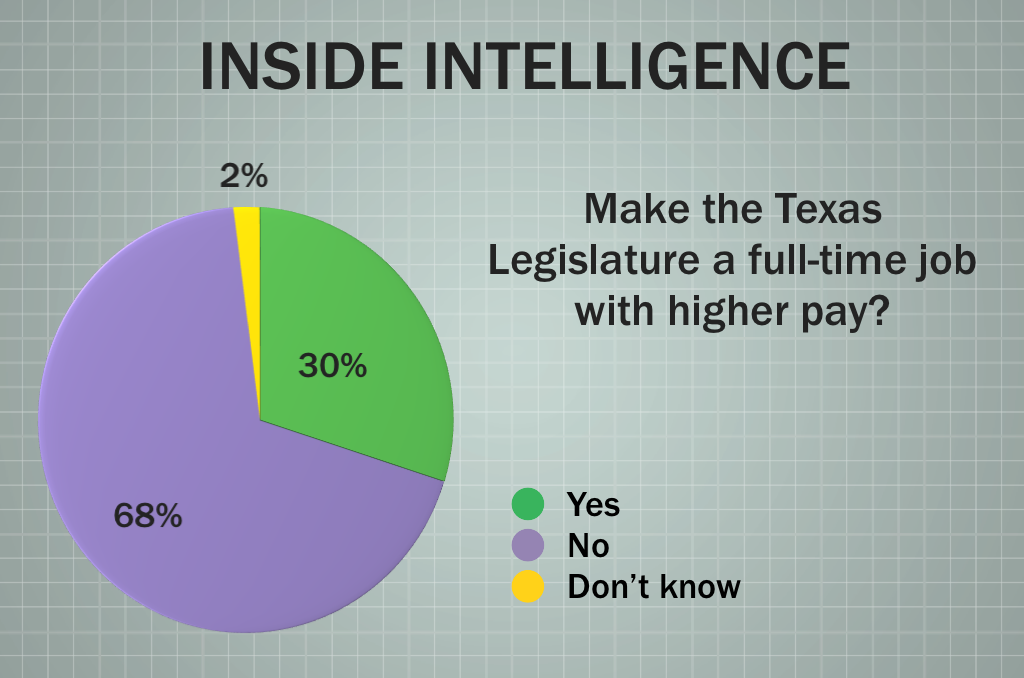 And finally, there have been proposals to replace the part-time Texas Legislature with a full-time legislature and paying lawmakers full professional salaries. Is that a good idea?

• "It is an excellent idea if you limit the outside employment and ethics rules."

• "Yes to paying them more no to a full time lege. They would only spend their time expanding government."

• "God-awful!!! Perhaps annual sessions that alternate between budget and revenue work one session and other matters the following year."

• "At the moment, the part-time Legislature is not an adequate check on the Perry machine. But it would be adequate in more normal times, after Perry is out."

• "It would work if you restricted income and outside work and made the legislature meet annually rather than every two years."

• "Paying legislators full-time pay does not make them more independent -- it makes them more insulated and narcissistic (if that's possible). Look at Congress. Look at California. Does their Legislature perform better than ours? No. Look at New York. Their Legislature is paid over $100K a year and it is rife with corruption. Full-time legislators in other states don't stop making money from other sources -- its just not as transparent. The same forces that have 'go to players' in our legislature -- big business, big industry, trade associations and trial lawyers -- have 'go to players' in those legislatures where the members are paid full time --"

• "Anything to improve the quality of the Legislature."