A panel of federal judges in San Antonio proposed new redistricting maps for the Texas Senate and the Texas House late Thursday, asking for comments by noon on Friday. They're trying to finish maps before candidates start filing on November 28 — a date set by the court.

The three-judge panel proposed one map for the Texas Senate, and two for the Texas House, one from the court and another from Judge Jerry Smith, who's on the panel and is a member of the 5th U.S. Circuit Court of Appeals. That appears to set up a majority opinion from Judges Orlando Garcia and Xavier Rodriguez and a minority opinion from Smith on the House plan. And they didn't issue any proposal, or any information at all, about congressional maps that are also pending before the court.

The House plan with two judges on it — H298 — pairs several House members, meaning there are districts with two incumbents in them, but several of those pairings include members who don't intend to seek re-election. The House map approved by the Legislature included seven pairings; the court's version includes 12 (Smith's has eight pairs). It puts Hispanics in the majority in each of the districts in El Paso County, adds a district in the Hidalgo/Cameron county area, creates a minority coalition district — one where Anglos are the minority — in Central Texas and consolidates districts in Corpus Christi.

"It's not a perfect plan," says Jose Garza, attorney for the Mexican American Legislative Caucus. "It's not the optimum plan ... but it's significantly better than what the state of Texas came up with on a number of fronts."

A spokeswoman for Attorney General Greg Abbott, whose office is defending the legislative maps, didn't comment on the content of the proposals. "We have received the court's proposed interim maps and are reviewing them and working to prepare a response as requested by the court," Lauren Bean said via email.

It gives Houston Democratic Reps. Hubert Vo and Scott Hochberg their own districts — instead pairing Republicans Beverly Woolley, who's not seeking re-election, and Jim Murphy, who is. According to attorneys for the MALC, the court's map also creates a new Hispanic district in Harris County.

The other pairings in the court's House map each involve at least one member who is either moving or isn't seeking re-election, either because they want to get out of politics or because they're seeking another office. They include Tuffy Hamilton of Mauriceville and Allen Ritter of Nederland, Rick Hardcastle of Vernon and Lanham Lyne of Wichita Falls, Jose Aliseda of Beeville and Tracy King of Batesville, Warren Chisum of Pampa and Jim Landtroop of Plainview, Kelly Hancock of North Richland Hills and Barbara Nash of Arlington, Rodney Anderson of Grand Prairie and Helen Giddings of Dallas, Cindy Burkett of Mesquite and Joe Driver of Garland, and Will Hartnett and Kenneth Sheets of Dallas.

That punches 13 holes in the map: In North Texas, where the Hardcastle/Lyne pairing is open because neither is coming back, centered in Wichita County; in Collin and Rockwall counties; two in Brazos County, one of which will be filled by a runoff next month; centered in Fort Bend County; a new Cameron/Hidalgo seat; one centered in San Patricio and Jim Wells counties; in Denton County; two in Tarrant County; in Williamson County; in Dallas County; and one centered in Montgomery County. Four of those empty seats are new minority opportunity districts.

"This is significantly more than we were able to accomplish on the floor," says state Rep. Trey Martinez Fischer, D-San Antonio and the chairman of MALC.

Several districts were changed in ways that could make them more competitive, according to Matt Angle with the Democratic Lone Star Project. "It put back in play several districts in Dallas County," he says. The new map includes 57 districts in which Barack Obama got 50 percent or more in the 2008 election. The current House has 49 Democrats in it.

The biggest change in the Senate map is in Tarrant County, where Sen. Wendy Davis, D-Fort Worth, appears to have had most of her current district restored. The legislative map drew her into decidedly Republican territory. "The Senate map is a big win for Fort Worth and for Wendy Davis," Angle says. "She has a chance to replicate that [2008] coalition in 2012 and probably will. She clearly from a political standpoint is the winner here."

It will probably take a few days to sort this out, but the judges made a change in the Senate map that made subtle changes all over the state. The difference in population from the smallest district to the largest is just 1.52 percent; in the maps approved by the Legislature, it was 8.04 percent. Put another way, it's a difference of 12,330 people now; in the legislative version, it was 65,226. That's gotta make a difference to someone.

Here are the maps in picture form; details are available on the Texas Legislative Council's redistricting website (Lege Council was enlisted to draw the maps for the judges and has all of the details, as they did when drawing for the Legislature): 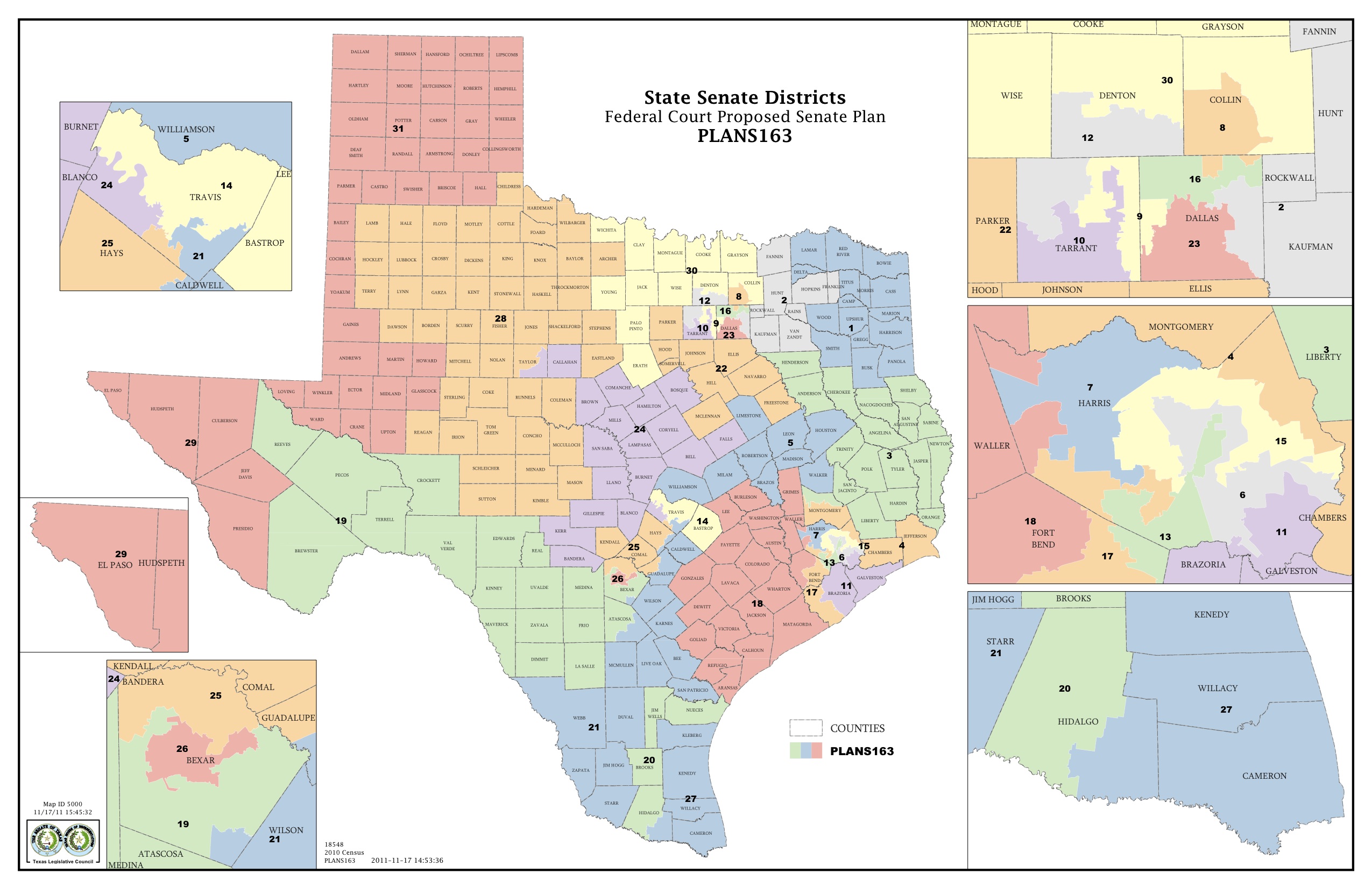 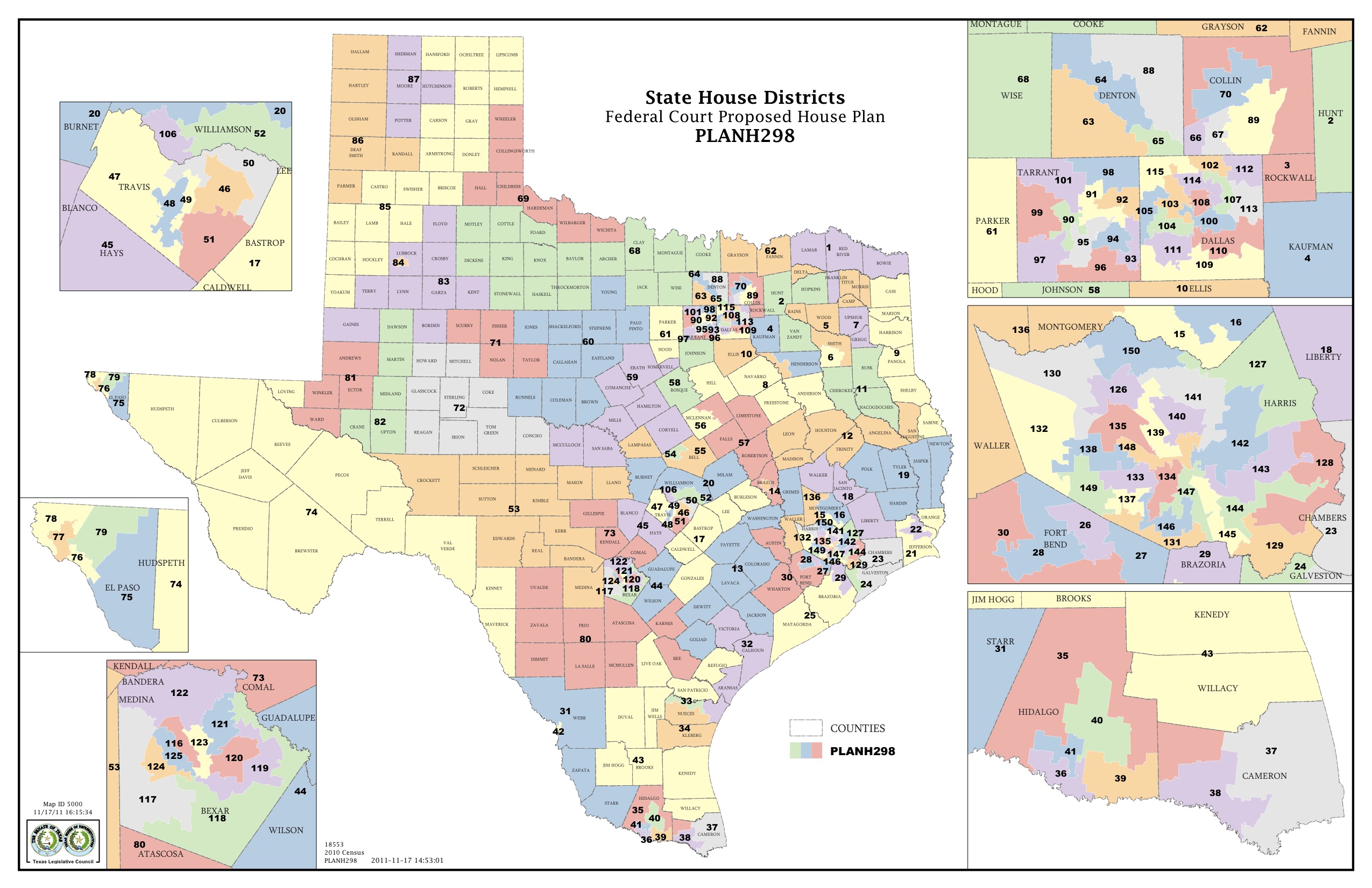 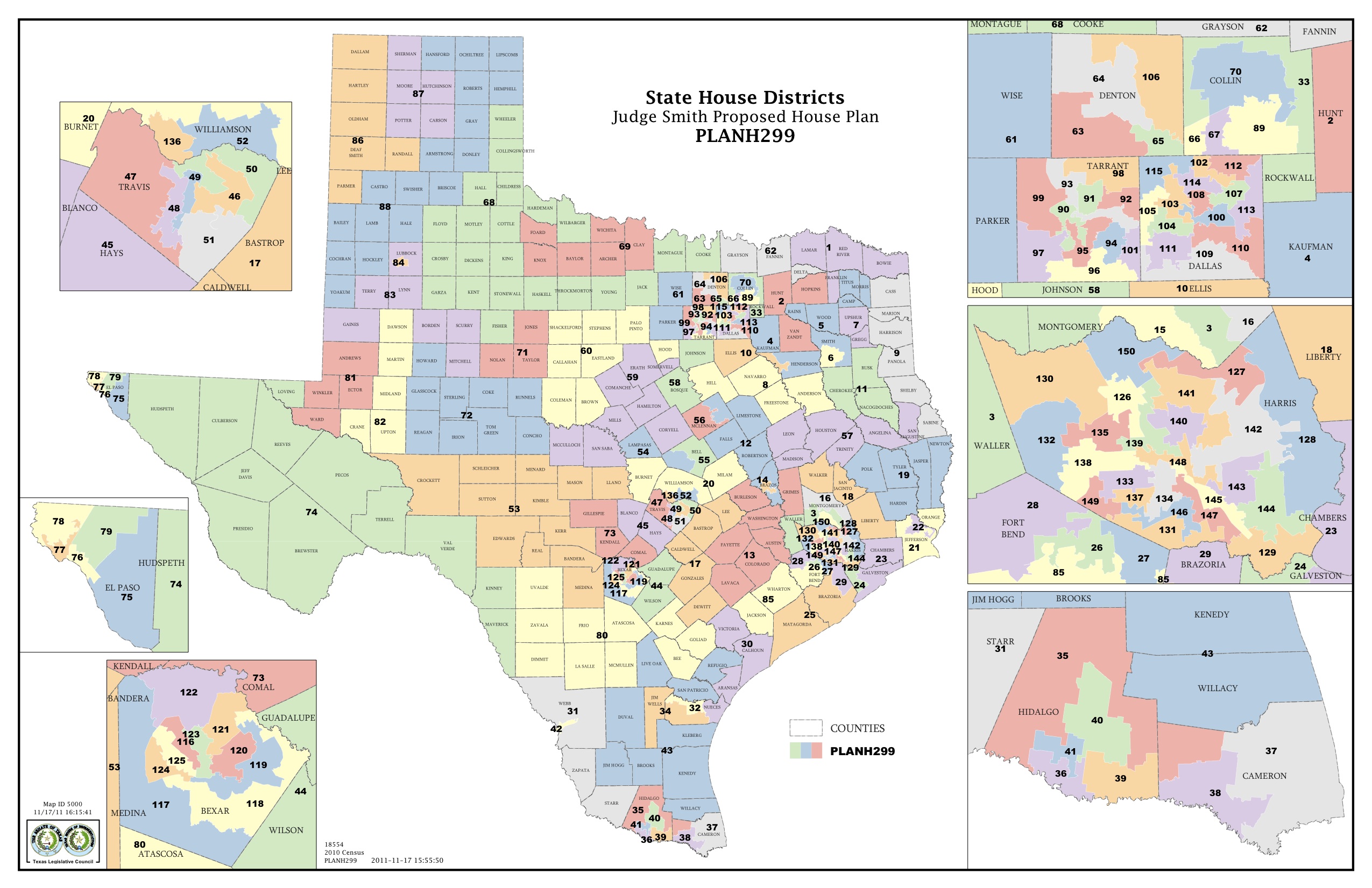