We put a Rick Perry reboot question at the top of our insiders' survey this week to find out if his remade campaign was getting traction, but a funny thing happened right in the middle of the questioning. So we lopped off the responses that came in before Wednesday night's debate and opened another version of the same question to compare the pre-debate answers with the post-debate answers.

Before Wednesday night, 29 percent of the insiders said the governor would regain his front-runner or near front-runner status in the Republican primaries for governor. After the debate, that fell to 10 percent. The number of naysayers grew from 59 percent before the debate to 83 percent after the governor forgot the third federal agency he wanted to abolish and ended with the quote people will remember: "Oops."

With the Republicans in the primary split on ideological lines and with a significant number of Democrats dissatisfied with the incumbent, we asked the insiders about the possibility that a third-party candidate will be a serious challenger in the general election. Three in five say it won't happen, but 23 percent think a conservative third-party candidate will play a role; only 2 percent think a liberal will emerge.

The federal judges looking at redistricting in Texas are now drawing maps. Eleven percent of the insiders think those will be about the same as the maps drawn by the Legislature; 2 percent expect more Republican districts in the court maps; 34 percent think Democrats will get more seats; and 48 percent think there will be more minority seats.

Finally, we asked about the influence of the Tea Party in the next cycle of legislative races. Most — 59 percent — say the movement will have a minor effect, while 34 percent say they'll have a major effect.

As always, we've attached the full set of comments to our questions; here's a sampling: 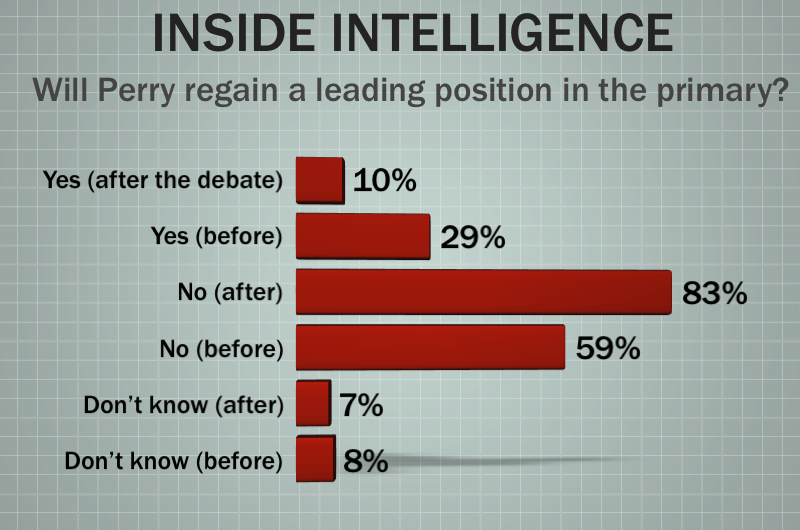 Will Gov. Rick Perry regain his front-runner or near front-runner position in the Republican presidential primary? (Before the debate)

• "Newt is next. If he folds quickly enough, Rick will have another day in the sun. If Newt has more staying power, he may be the anti-Mitt."

• "Cain will flame and Perry will edge out Gingrich as the conservative alternative to Romney."

• "He's shown clearly he is not ready to be president and never will be."

• "That soufflé will not rise a second time."

• "You never want to count Rick Perry out in a political contest, but it is getting harder and harder to see the road back to the top."

Now that you've had a chance to see or read about Gov. Rick Perry's 'oops' moment in last night's debate, will the governor regain his front-runner or near front-runner position in the Republican presidential primary?

• "Nor will he ever run for office again."

• "Please make him stop. Laughingstock is too kind a word. Horror-stock is more like it."

• "That memory lapse will go down in history as one of the major blunders that have sunk political campaigns ... 'Who am I and why am I here' ... 'You're no Jack Kennedy'"

• "At least we now know who the governor will be during the 2013 Session."

• "No before, and emphatically no afterwards"

• "Painful moment . . . on the biggest stage. Can't help but feel empathy for the Governor. Must be pretty rough to know that you've just provided material for the opening skit on SNL."

• "Last night's debate was proof positive that prior mistakes were not aberrations but instead were indicative of major unpreparedness for the nation's highest office."

• "Hell no, he can't even deliver his own talking points. Sad. Rick Perry has never been tested in Texas and it now painfully shows on the national scene."

• "At most a 10% chance. The problem is it played into the existing narrative that he's stupid and will be unable to compete w/ Obama in a debate."

• "Probably a little soon to throw dirt on his grave, but he's certainly running out of toes to shoot off." 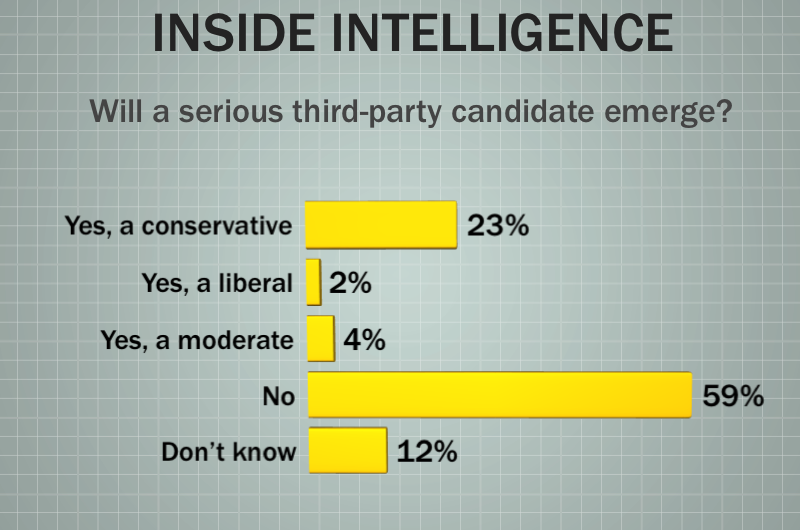 Will a third-party candidate for president gain significant support next year and if so, from what part of the political spectrum?

• "Third-party candidates will be relegated to last paragraph of a few election stories as 'other candidates receiving a small percentage of the vote.'"

• "Romney is not motivating the grass roots. They will want an alternative."

• "The time is near when a viable third party moderate will gain traction, but it won't happen in 2012."

• "A third party candidate will not gain 'significant' support in the 2012 campaign cycle, but the political system is simmering toward the formation of a third party. The rise of the Tea Parties and Occupy Wall Street point in that direction; the 'wrong track' numbers in polling, as well as the low opinion of the President and Congress suggest the level of frustration and disgust with Washington and the two major parties could enable a third party to emerge."

• "Anti-Obama-ism will keep the right together, despite the leftist media's best attempts to splinter his opposition." 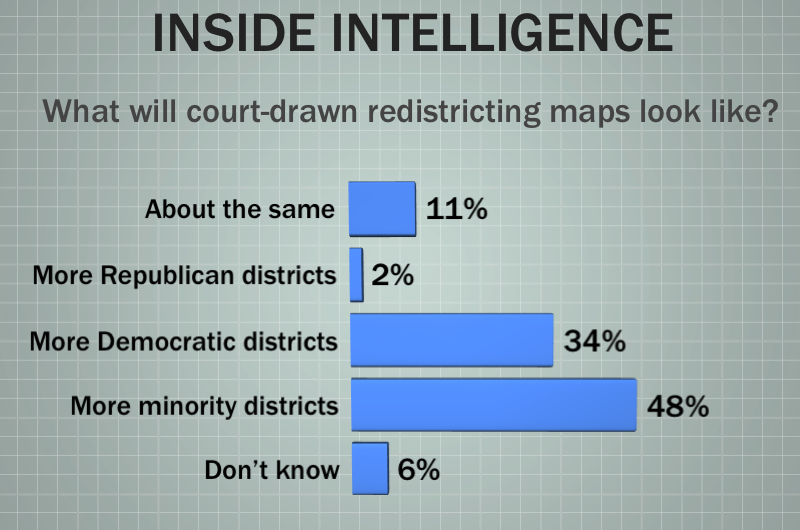 Now that the federal courts are doing the drawing, what will the new redistricting maps look like?

• "More minority districts for sure. Whether or not they elect Democrats is a less certain; it depends on how discouraged their voters are."

• "(CONGRESS) Dallas-Metro finally gets an Hispanic seat; The Lucios will hate that Nueces County is once again attached to Cameron County; Doggett lives and Castro finds a new seat. (STATE) Mike Jackson runs for re-election to senate; Larry Taylor says Dude, you stole my wave; The Bonnens go postal against the world; Veronica Gonzalez gets a new district in the shape of Christ; Pena just can't get a break; Wendy Davis will complain regardless of the new map;"

• "Hopefully will keep communities of interest intact, rather than create minority-opportunity districts that contort district lines at the expense of communities."

• "The GOP got greedy and will pay the price, though the price will be relatively small in terms of the actual number of seats. We're likely to see both more minority districts as well as more Democratic districts." 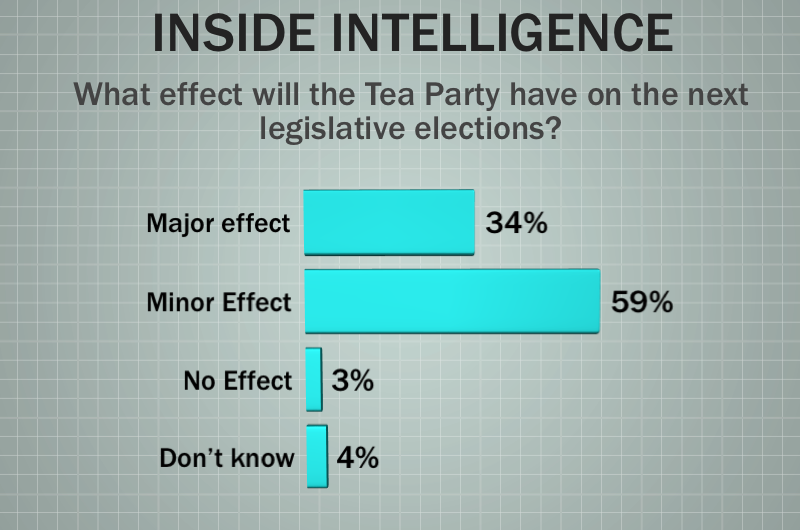 After this round of federal elections will the Tea Party be a major or minor factor in the next cycle of Texas legislative races?

• "(I assume that when you say 'this round' you are referring to the 2012 cycle and by 'next cycle' you mean the 2014 cycle.) Regardless, I am sure that the 'tea party' will continue to heavily influence Republicans primaries and legislative policy positions taken by Republican legislators. 'Tea party' groups are very well-funded have used that funding to build considerable infrastructure in Texas and elsewhere."

• "The major effect will be to drive reasonable independent voters and seniors to the Democratic side. We are giddy with anticipation."

• "The numbers don't support this perception that the Tea Party was a major force. Their candidates only won in primary run-offs when voter turnout is low. The General Election was anti-Obama, not pro-Tea Party."

• "General election voters will start participating in primaries. They will be the grown-ups."

• "Tea Party has been largely absorbed by the GOP, and is losing altitude rapidly as an independent force."

• "Just because tea is hot doesn't mean it's strong."