[Editor's note: This is the last of five stories about the University of Texas/Texas Tribune Poll. Monday, we looked at Texas voters and the 2012 presidential contest. Tuesday, how voters rate Rick Perry's job performance. Wednesday, the races for U.S. Senate and lieutenant governor. Thursday, whether Texans think their friends would vote for a Mormon president.]

Texas voters think the economy is the biggest problem facing the country but immigration is the most pressing issue facing the state, according to the new University of Texas/Texas Tribune poll.

That coincides with the rise of Gov. Rick Perry's policies on illegal immigration as an issue in the presidential race and with his relative electoral weakness in Texas, where the UT/TT poll has the governor in a virtual tie with former business executive Herman Cain among the state’s Republican voters.

Texas voters are also much more likely to say the state is moving in the right direction than the country, and that the state’s economy is faring better than the national economy. And half of them say the state government in Texas is a good model for other states to follow.

Other issues that have risen to the top or near to the top of the national debate found little traction among Texas voters as issues facing the country. That list includes national security and terrorism, energy, Iraq, Afghanistan and Pakistan, and gay marriage. Immigration, for example, was chosen by only 3 percent of the respondents on the list of the country's problems, and border security by only 1 percent. 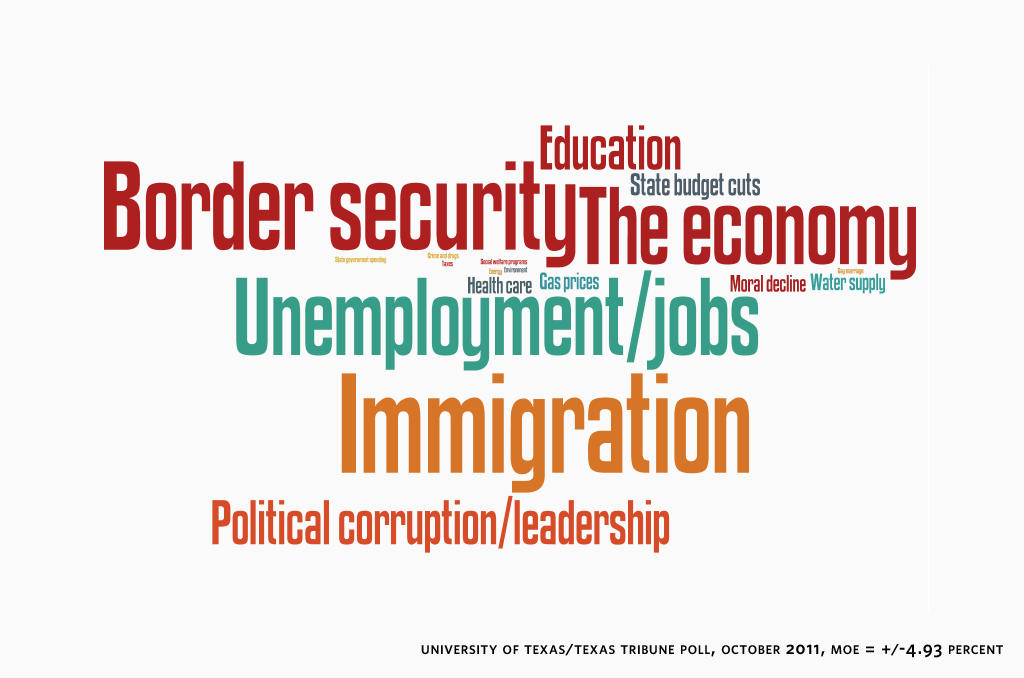 On issues facing the state, those two topics zoom to the top, with 18 percent ranking immigration as the most important problem facing the state, followed by border security at 16 percent, and the economy and unemployment/jobs, each at 14 percent. Put another way, 34 percent ranked immigration and border security highest, while 28 percent put the economy, unemployment and jobs at the top of their lists of the state's most pressing problems.

Nothing else among problems facing the state got comparable attention. Education and political corruption/leadership were each chosen as the top state issue by 8 percent of the respondents. And some previously high-profile issues sank to zero, including transportation/roads/traffic, electoral fraud, and insurance and utility rates. 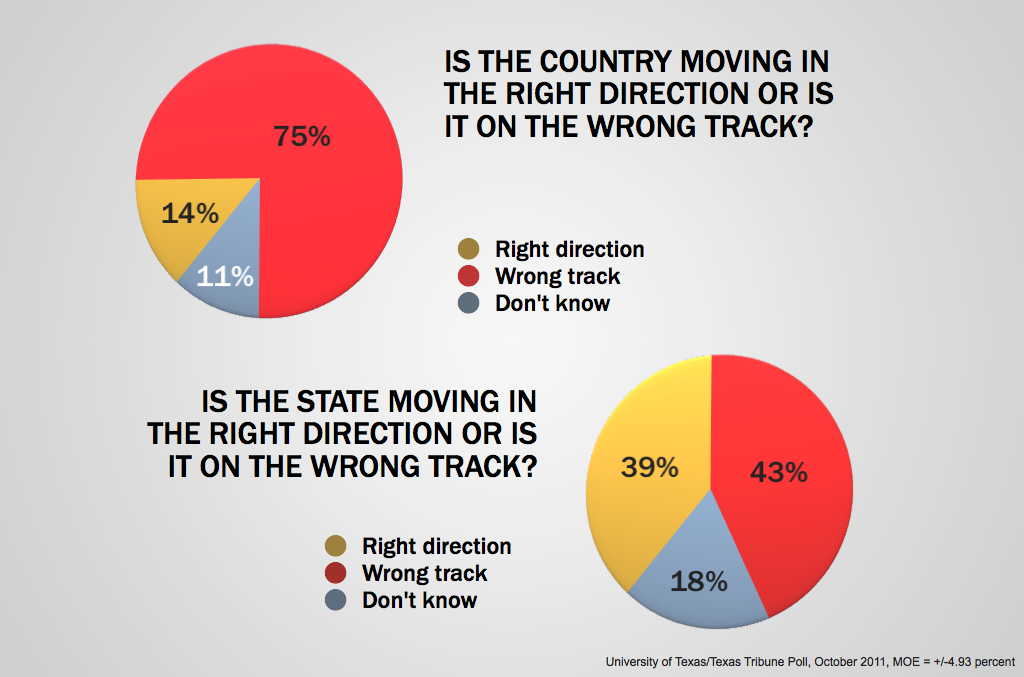 "Once again, immigration plus border security beats economy plus jobs. That's astounding," said Daron Shaw, co-director of the poll and a government professor at UT-Austin. "It dovetails with the other observations we've had about Gov. Perry's immigration stand."

The country is on the wrong track, according to 75 percent of the respondents, while only 14 percent say things are headed in the right direction.

"There's a huge wrong track bias," Shaw said. "But even with the pessimistic bias [to the question], that's a bad number." 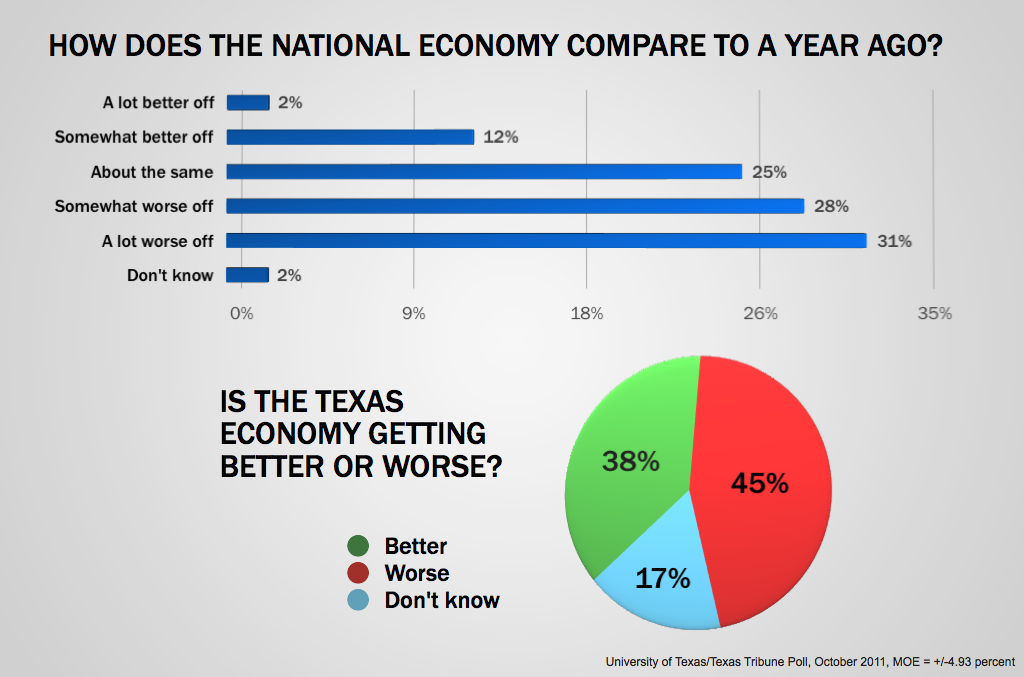 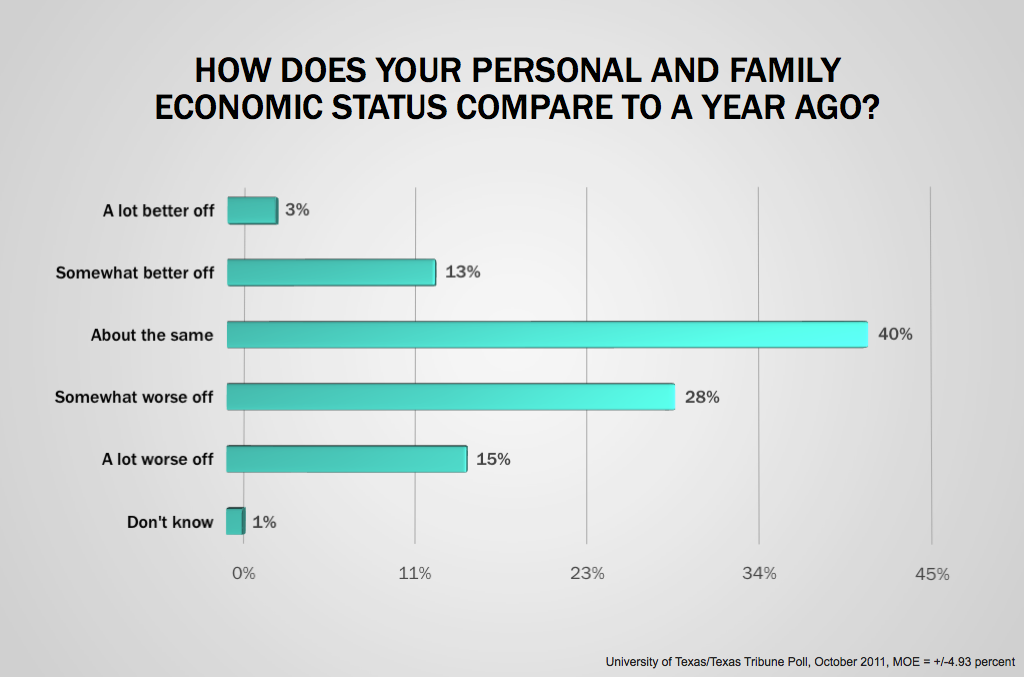 Two in five respondents said they and their family are about as well off economically as they were a year ago, while 16 percent say they're in better shape and 43 percent say they are worse off.

Exactly half of the respondents agree that the way state government is run in Texas is a model for other states, including 21 percent who "strongly" agree. Another 38 percent disagree with that proposition.