[Editor's note: This is the second of five stories about the University of Texas/Texas Tribune poll. Yesterday we looked at Texas voters and the 2012 presidential contest. Tomorrow, the races for U.S. Senate and lieutenant governor.]

A key part of Gov. Rick Perry's pitch to Republican presidential primary voters is the performance of the state's economy — especially in job creation — during his tenure as governor. But Texas voters, for the most part, are more likely to see him as a bystander to the state's success than its driver, according to the new University of Texas/Texas Tribune poll.

Asked about the factors behind the state economy's relative strength, 65 percent of those responding attributed it to long-standing advantages such as the state's wealth of natural resources, its balanced budget, the absence of a state personal income tax and a lenient regulatory environment. Another 21 percent cited Perry's leadership in promoting lower taxes, lenient regulation and small government as the main reason the Texas economy has fared better than the national economy.

"They're not crediting him, but I find that unsurprising," said Daron Shaw, co-director of the poll and a government professor at UT. "Voters are rational gods of vengeance, but it's not clear to me how much they're rational gods of reward.  They'll kill you if things go wrong — they may give you some credit if things go right."

"He might do well in contrast with Obama, but that's not the contrast right now," Shaw said. "The contrast is with [other] Republicans."

The poll results appear to show Texas voters don't buy Perry's claim that his policies are responsible for the state's economy and that he can do the same for the country. The findings, however, buttress his claim that protecting those state policies against efforts to raise taxes and increase regulation helped the state weather the recession.

Perry is in a statistical tie with former business executive Herman Cain, and there is some indication that fiscal conservatives among Texas Republicans favor the newcomer. Among voters who identify themselves with the Tea Party, Cain outdid Perry 45 percent to 13 percent in the poll; those who chose the Republican label over the Tea Party label favored Perry 44 percent to 16 percent.

Asked whether a series of descriptive words and phrases could be used to describe Perry, the respondents were most likely to agree with "career politician," "conservative" and "a real Texan." They agreed least with the description of the governor as an "outsider" and they straddled descriptions like "honest," "corrupt," "strong leader," "competent" and "straight talker."

"The thing that really sticks out to me is the degree to which the governor is seen as a career politician," said Jim Henson, who teaches government at UT, runs the Texas Politics Project there and co-directs the UT/Tribune poll. "He very effectively de-emphasized the career-politician part of his profile in the 2010 race with Kay Bailey Hutchison by negatively portraying her association with national government. He can't do that in a race where he's running for national office."

"The political class is not held in very high esteem by the voters, and the governor was not held accountable for that in the last election," Henson said. 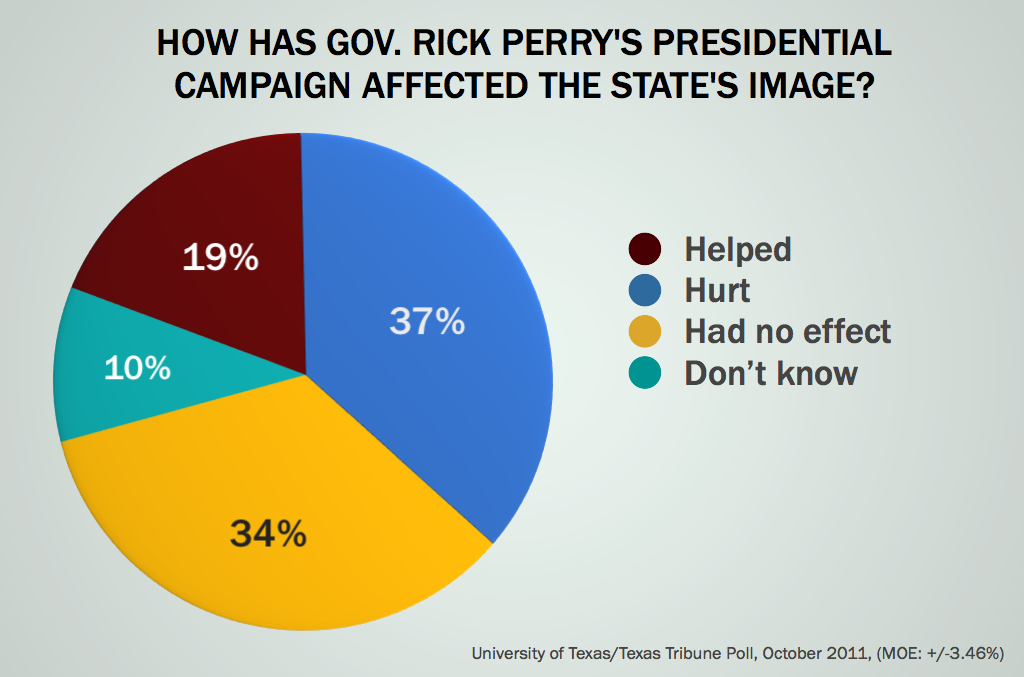