We stuck with the presidential race and the governor in this week's nonscientific survey of political and government insiders, asking for their impressions of Gov. Rick Perry and how his candidacy reflects on the state.

A majority say his candidacy has hurt the state's image outside of Texas. Only about one in ten thinks his campaign has helped Texas' image. We asked about Perry's campaign claim that his stewardship is responsible for the relative strength of the Texas economy; 18 percent agreed, while 80 percent credit the state's natural resources and long-standing policies like a balanced budget, no personal income taxes and a lenient regulatory environment.

More than half of the insiders disapprove of the job Perry's done as governor, while about a third give him good marks. They're opinionated: Only 2 percent "neither approve nor disapprove" and nobody checked the "don't know" box.

Finally, we asked the insiders to score the governor on a number of attributes, on a ten-point scale. They were least likely to agree that Perry can be described as "corrupt" or as an "outsider" or as "competent." They agreed most strongly with descriptions of the governor as a "career politician", "conservative", "self-serving" and "a real Texan."

As always, we've collected the full set of verbatim comments to our questions and they're attached. Here's a sampling: 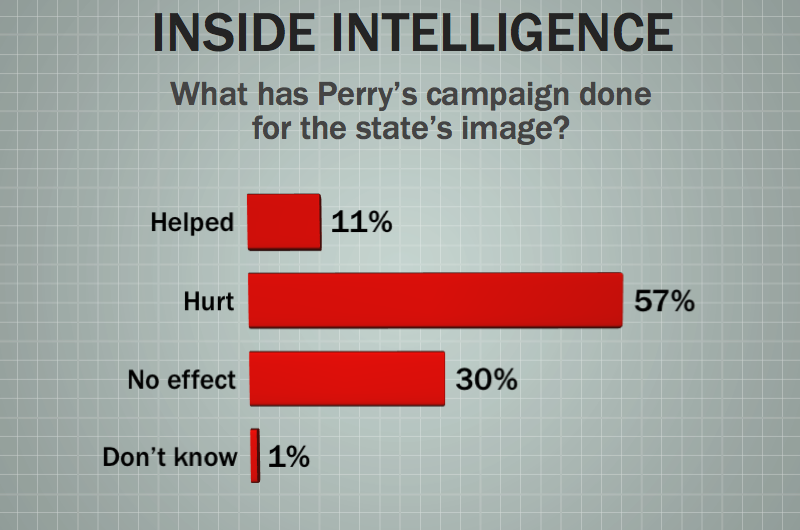 Regardless of how you view Rick Perry, do you think his candidacy has helped, hurt, or had no effect on Texas's image among voters outside of the state?

• "Having the state discussed nationally never hurts. Especially when they say we had 4 aces dealt to us in Texas."

• "Had the media probed his leadership and policies for the past 10 years, had he been held accountable, he wouldn't be running for president and we wouldn't be in this position of embarrassment."

• "The view of Texans as crude and ignorant has been reinforced"

• "He's partly stupid. Just the part that shows on TV."

• "It has simply reconfirmed what the rest of the country already thinks about our state. People like Debbie Riddle, Leo Berman and Louie Gohmert have done their part to make our state a national laughing stock as well."

• "Reminds rest of U.S. what they don't like about Texas -- the swagger and perceived rudeness and intolerance" 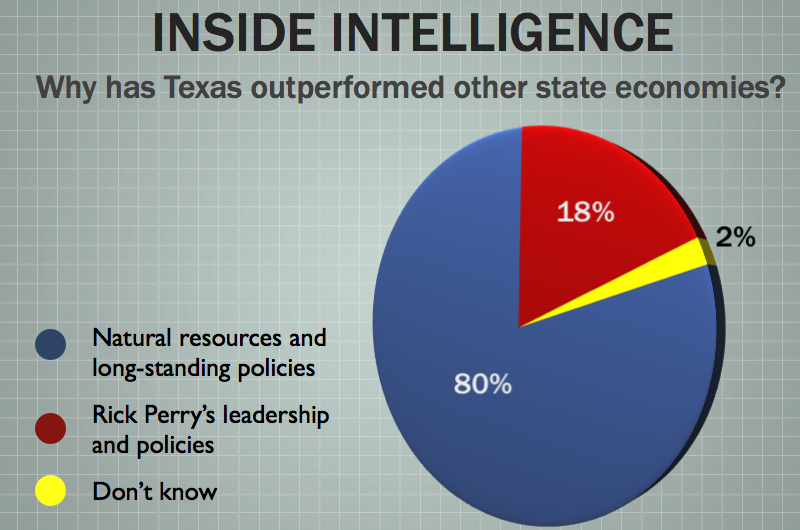 • "Fared better is both a temporal and relative. Yes natural resources have helped us weather a storm. But we're still a low-wage economy and just because we didn't fall to the mat doesn't hide the fact that a lot of families are living month to month."

• "Many states have resources but push policies to stop their harvest. Many states change tax policies yearly. Texas has a friendly regulatory climate and low taxes because Perry and the legislature have not changed their policies."

• "Rick played the cards that were dealt to him. He played the hand well. He deserves credit for his play, and should thank his lucky stars he's from Texas!"

• "I would add that Rick Perry's leadership and policies have put Texas in the place it is now, which is not only not entirely better than the rest of the country but is only temporary. When the chickens come home to roost, we will see the real impact of Rick Perry's tenure and it won't be pretty."

• "Rick Perry is the 'Mack Brown' of Texas Governors. He will never get enough credit for all the things that he initiated while in office, but will certainly bear the brunt and criticism for everything that went wrong."

• "Perry has been dumb lucky"

• "But to Perry's credit, he didn't screw it up, and there is something to be said for that." 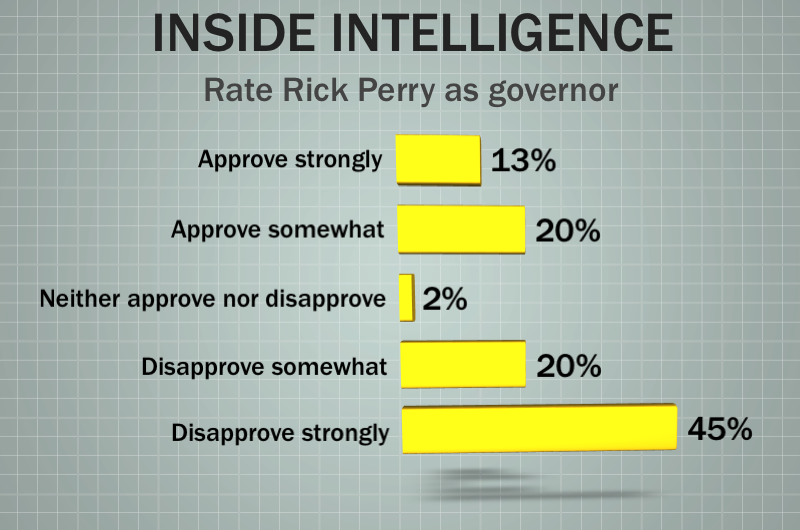 How would you rate the job Rick Perry has done as governor?"

• "I know people will disagree, but Texas is the envy of many states and the governor and legislature deserve much of the credit."

• "In 11 years under his term, Texas has seen two school finance lawsuits, twice that the state's budget has been majorly in the hole, caters to special interests (HPV mandate), caters to his rightwing base (sanctuary cities, sonogram before abortions, voter ID), and yet we find our state worse off then it was when Dubya was here."

• "His critics can say what they want, but Texans have said 'YES' every time he's been on the ballot for Governor. If you're a D, that either says something good about the man or something bad about your candidates." 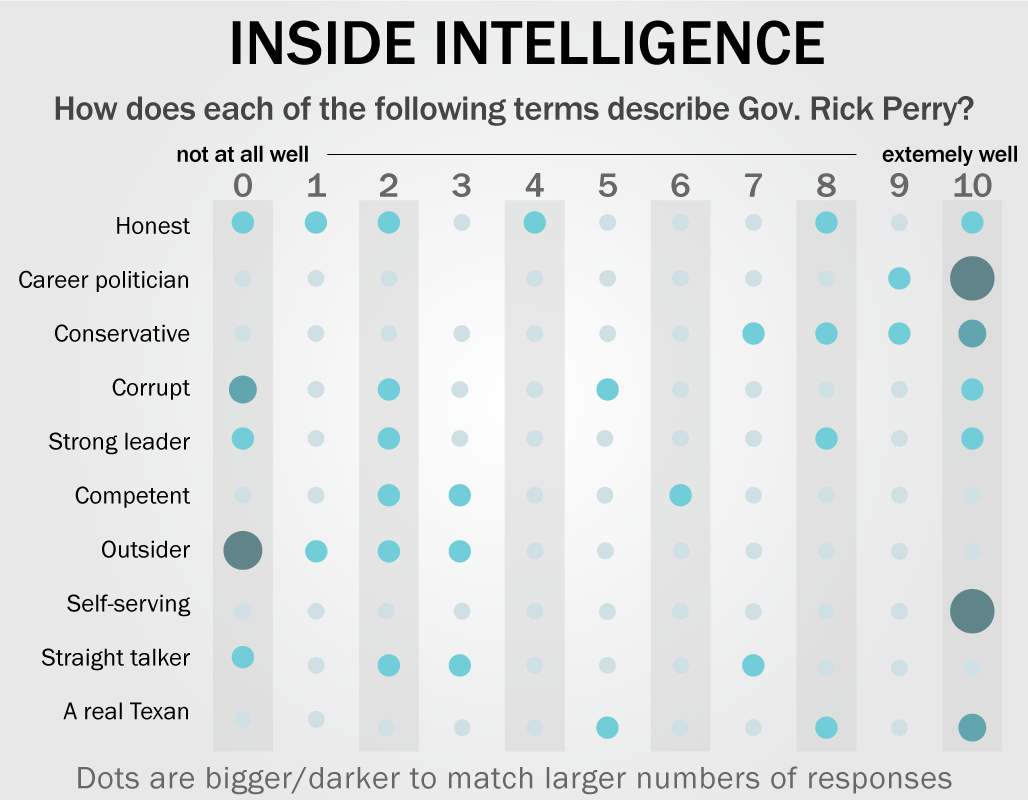 Here are several descriptive words or phrases. Using a 0-10 scale, where 0 means “not at all well” and 10 means “extremely well,” please tell us how well each item describes Governor Rick Perry.

• "Career Politician - so many use that word as a pejorative. It's not, or rather - it shouldn't be. But anyone who's spent as much time in office as he has is certainly a career politician. 'Washington Outsider' - hell yes! Didn't you read Fed Up?"

• "Not sure if 'Strong, Conservative Leader who is dishonest and barely competent' is a winning slogan, but nothing else is working."

• "Although I disagree strongly with his ideology, his tactics and his priorities, I acknowledge that the guy is clearly a strong leader--by whatever means they are that he uses, he bends people and processes to his will. He's a strong leader...he's just not a good leader."

• "For as long as he has been 'in' office, Austin's political establishment considers him an uncouth outsider intruder on their private party. Just how many times can you guys write his political obituary?"

• "Every negative article that appears today in the national press relates to a friend that he has rewarded in some way."