Gov. Rick Perry is statistically tied with businessman Herman Cain among Republican presidential primary voters in his home state of Texas, with the rest of the GOP candidates well behind the leaders, according to the new University of Texas/Texas Tribune poll.

Cain got 27 percent to Perry's 26 percent among Texas registered voters who identify themselves as Republicans. U.S. Rep. Ron Paul was next with 12 percent, followed by former Massachusetts Gov. Mitt Romney at 9 percent and former U.S. House Speaker Newt Gingrich at 8 percent. The other Republican primary candidates — Michele Bachmann, Jon Huntsman, Gary Johnson and Rick Santorum — each got 2 percent or less; 11 percent of the respondents answered "don't know," and another 1 percent said they would prefer "another Republican candidate."

"Texans appear to be subject to the national dynamic," said Jim Henson, who teaches government at UT, runs the Texas Politics Project there and co-directs the UT/Tribune poll. "And the dynamic when we were out in the field was that Herman Cain was ascendant. He had really grabbed the attention of the conservatives in the GOP primary race in particular. And we saw that reflected in this poll."

Though they're statistically tied — Cain's lead over Perry is well within the survey's margin of error — the former executive leads Perry among rural voters in Texas, and has a smaller lead among suburban Republicans. Perry has a 2-point edge over Cain in urban Texas. Break that down a little more and the poll found Cain with a big lead over Perry in Houston and in Austin, while Perry had smaller advantages over Cain and the other Republicans in Dallas-Fort Worth and San Antonio.

"Maybe the most important number is that Cain is up 37 percent to 24 percent among the most conservative voters," said Daron Shaw, co-director of the poll and a UT government professor. "Perry wins with every other group."

In our May survey, Perry — at the time saying he had no intention of running for president — was in the back of a pack in which "don't know" led all of the candidates, with 14 percent. In the five months since then, the contest has come into focus, albeit with a large number of candidates. And it's still changing, Shaw said.

"The numbers show an even race for the Republican presidential nomination in Texas. Mr. Cain is probably at a high point because the survey was in the field just after the last GOP debate, where Cain continued to garner favorable reviews," Shaw said.

"For Gov. Perry, the news is mixed. The current numbers represent a substantial improvement over his showing in our last poll. On the other hand, he is not dominating here they way one might have expected. For Gov. Romney, this is yet more evidence that the more conservative elements of the GOP are skeptical of his candidacy," Shaw said.

It's clear that Texans want to replace the current occupant of the White House. 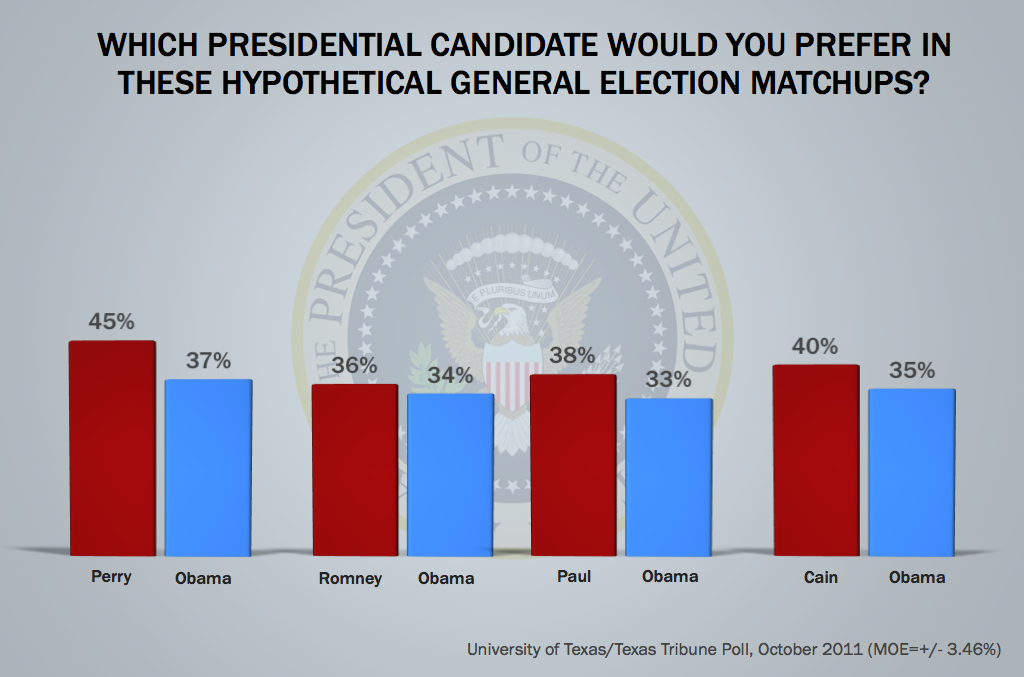 Perry would do better in a general election matchup against Democrat Barack Obama in a Texas vote held today, getting 45 percent of the votes to the president's 37 percent. In that trial heat, 10 percent would vote for someone else and 8 percent "haven't thought about it enough to have an opinion." Cain would outpace Obama 40 percent to 35 percent. Paul got 38 percent to Obama's 33 percent, and Romney got 36 percent to Obama's 34 percent among the Texas voters.

The respondents also gave Perry mediocre grades (although his are significantly better than their assessment of Obama’s performance).

“The governor has made prosperity and his success in Texas a centerpiece of the campaign for the presidency," Henson said. "It’s going to be very hard not to look at this and assess those claims somewhat. And at the very least see what his own constituents — and they are his constituents since he’s still in the seat of governor — think about his performance.”

[Editor's note: A more detailed statement of the poll's methodology is now attached above.]