Our insiders are watching their governor closely, and half of the people who've been watching him the longest — and professionally, at that — say he's not doing as well in the presidential campaign as they expected. Another 45 percent say he's doing about like they expected.

That said, they're not writing him off: 37 percent say he'll rebound from his recent round of low poll numbers and that same number say it's too early to tell how this is going to come out.

Most of the insiders didn't flunk Gov. Rick Perry on his latest debate performance; only 11 percent gave him an "F" after his appearance in Las Vegas. About one in four gave him an "A" or a "B," and a third gave him a "C," but most gave him a passing grade.

A strong majority think Mitt Romney will be the Republican nominee, with 20 percent saying it will be Perry. Most think the GOP's vice presidential candidate will be someone other than the nine people who've been gathering for these debates; among the presidential candidates, Herman Cain is the one the insiders say has the best shot at second chair.

The verbatim answers, as always, are attached. Here's a sampling: 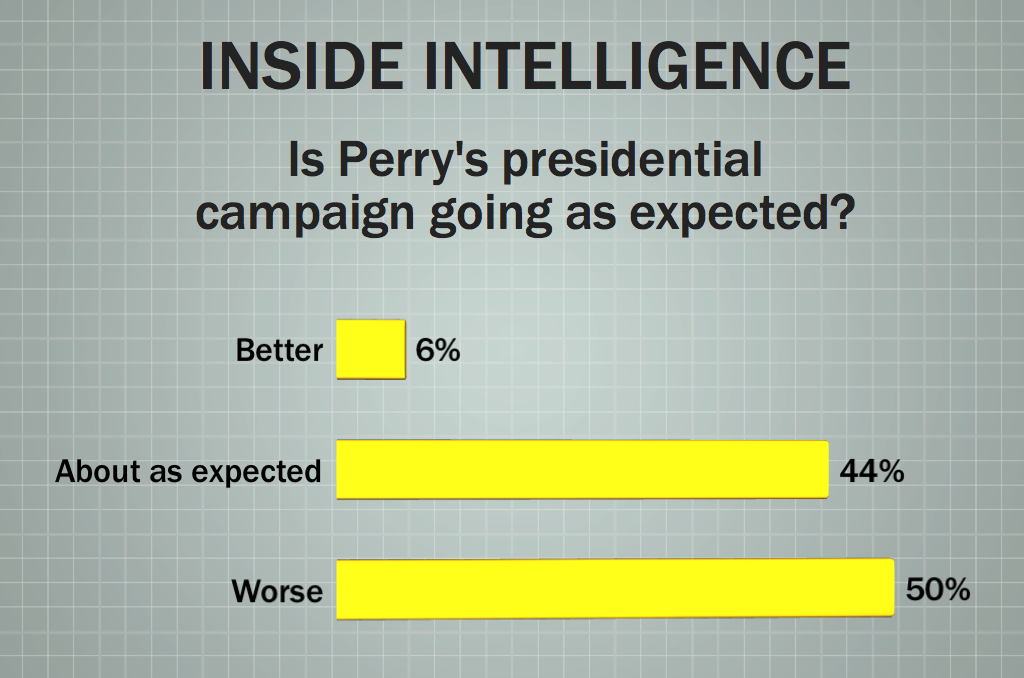 Is the governor's presidential campaign going as you expected?

• "Faster rise and a faster fall that I thought, but he's at about the same place in the end as I would have predicted - middle of the pack but with a possibility of breaking out."

• "Great to start (his support was artificially high) and now the pundits are calling him dead. He will be one of the final two Republican candidates."

• "Amateur hour. This is why Perry never debated in the first place. Unless he is scripted, he is awful on the stump. Given how many opportunities Perry has fumbled, you might as well label him the Tony Romo candidate."

• "The national media tear down on some well documented issues in TX should have been expected. However, the falling out with the right for immigration and his terrible responses to attacks have been surprising." 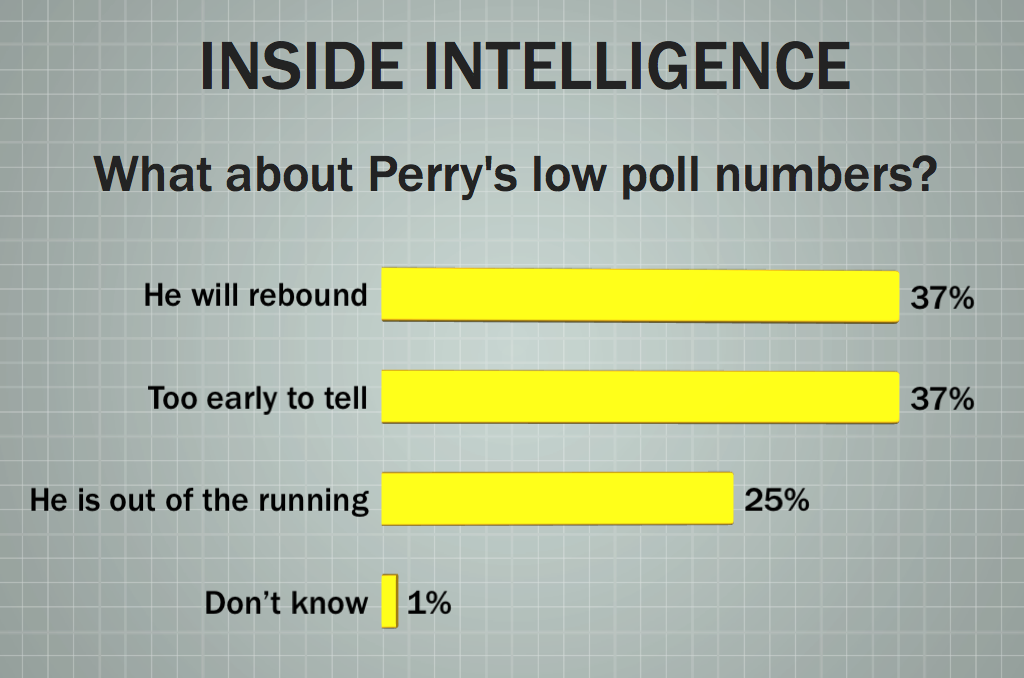 Gov. Perry's poll numbers have been sinking. Will his campaign rebound or is he out of the running?

• "We forget that the rest of the country has higher standards from time to time. Look at graduation rates in high school and in college. He has to win South Carolina and he may not have the money even with his $17 million."

• "Lots of time left. When Cain deflates Perry will rise. The right has no where else to go."

• "He may be able to rebound, but he has to learn to take a punch."

• "The Republican field is dominated by meteoric ascents and descents of flavors of the month - Trump, Bachmann, Perry, and now Cain. The steady as you go candidates Romney and Paul will be the last ones standing, and the only reason Paul will be around is because of his feverish base that captures tea party and occupy Wall Street frustrations."

• "Everyone now knows he cannot possibly stand on the same stage and hold his own against Obama. GOP sees the presidency in sight, and they will nominate someone who can win. That is not Perry. Because of his money, however, he stands the best chance of being the last man standing against Romney." 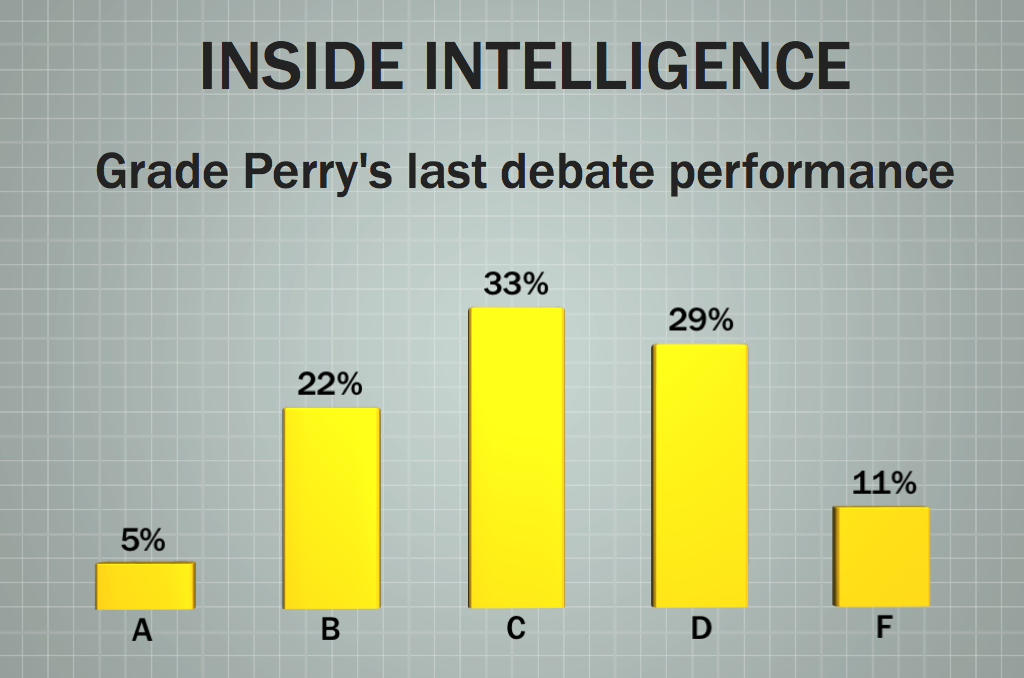 How would you grade Perry's performance in the latest debate?

• "If he would have left Romney alone I'd give him a B. he simply can't spar with Romney. It's painful to watch."

• "I think I was clipping my toe nails when that was going on."

• "He is improving. He needs to look happier. I believe he was in pain and on medication for at least one of the debates in which he did badly."

• "There were flashes of the old RP we know here in TX."

• "Appeared too angry. Clearly Romney got to him and it showed in Perry's facial expressions." 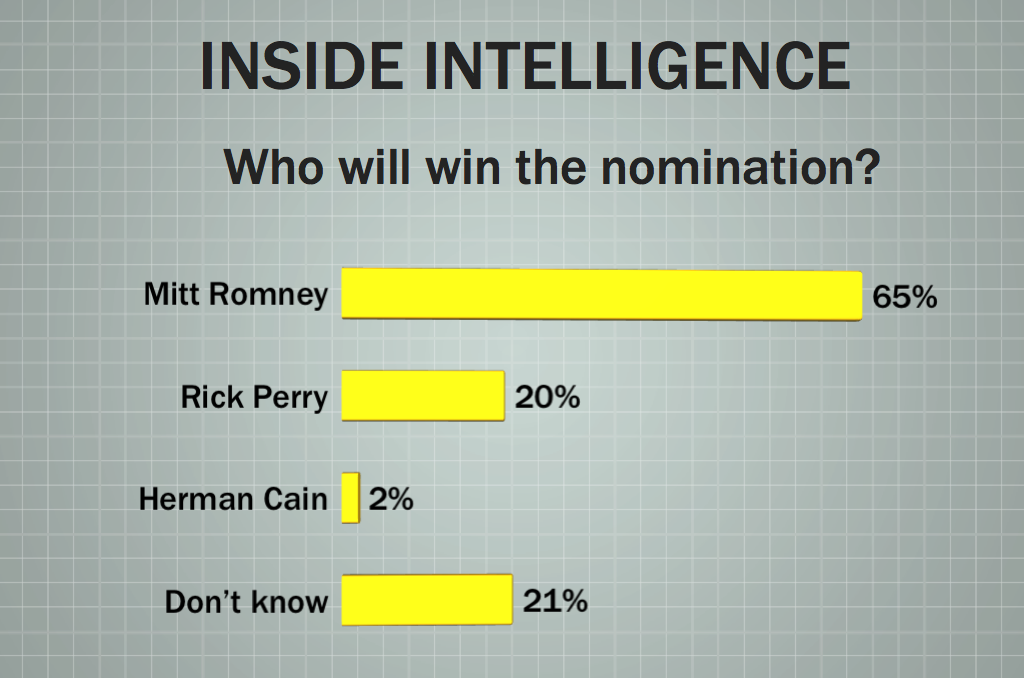 Who do you think will get the GOP nomination for president?

• "Are R primary voters repelled or scared away by platforms that include euthanizing hospitalized patients w/out insurance, frying Mexicans on electric fences, and competing over best death penalty scores?"

• "Perry will win if and only if he unites the conservatives behind him and against Romney."

• "Whoever is the Non-Romney candidate"

• "I can tell you it will not be Huntsman, Bachman, Paul, Gingrich, or Santorum. And who is Gary Johnson?"

• "Only two people can get this nomination, and about 70% of Republicans don't want it to be Mitt Romney." 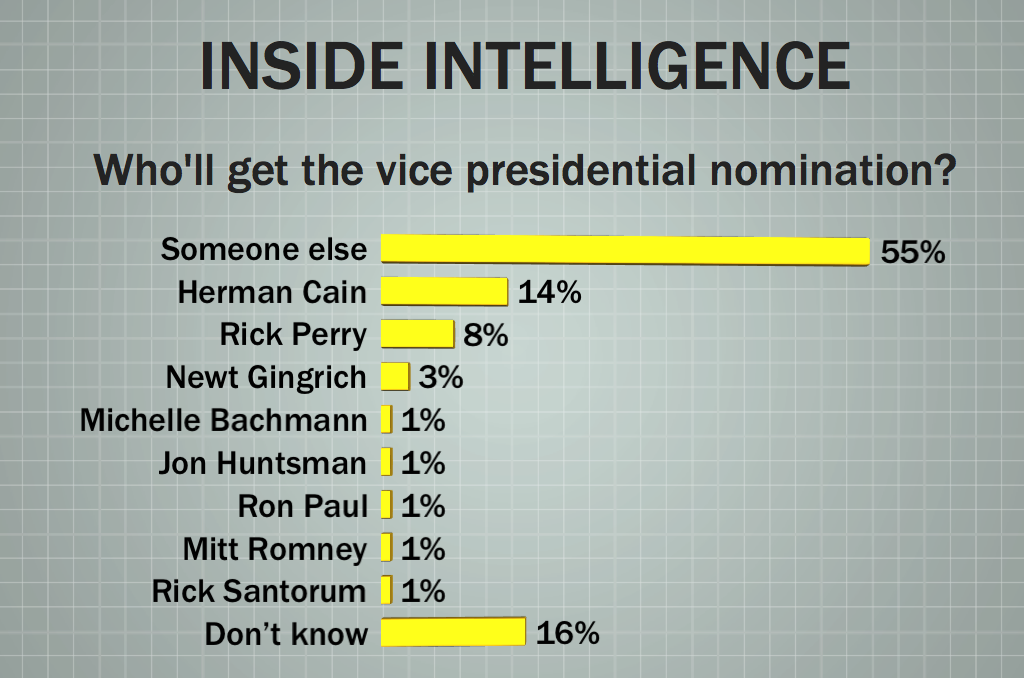 Who do you think will be the vice presidential nominee?

• "Rubio or Jindal or Pawlenty or Christie, in that order. I don't think anyone on your list is in the top 5."

• "Perry would be a good VP choice but he will probably piss Romney off so much that he will go somewhere else."