It's been a noisy week for Rick Perry, the presidential candidate, so we asked the insiders whether any of what they've heard and read over the last few days will stick. Will the stories have legs? Is the good news good enough to last? The bad news?

The Washington Post story about a hunting camp with a racially offensive name made the biggest splash after hitting the Internet last weekend, but only two of five insiders think that story will linger.

It buried a story published just a few hours earlier, and the insiders think that one will float back up: Perry told a New Hampshire audience that the U.S. should send the military into Mexico to help that country fight its drug cartels; 55 percent of the insiders say you'll hear about that again.

About that many expect to hear more about weekend stories about the state's slow delivery of aid to some of the families afflicted by hurricanes that hit Texas three years ago, and about ties between former Perry staffers and a company hired by the state to help with hurricane relief.

The governor followed all of that news with news of his own: He raised $17 million in less than two months for his campaign. That's stout, and some insiders think it overshadows the bad headlines that came earlier. Over half — 55 percent — say the financial success will linger as the campaigns go forward.

As always, we've attached a full set of verbatim comments; a sampling follows. 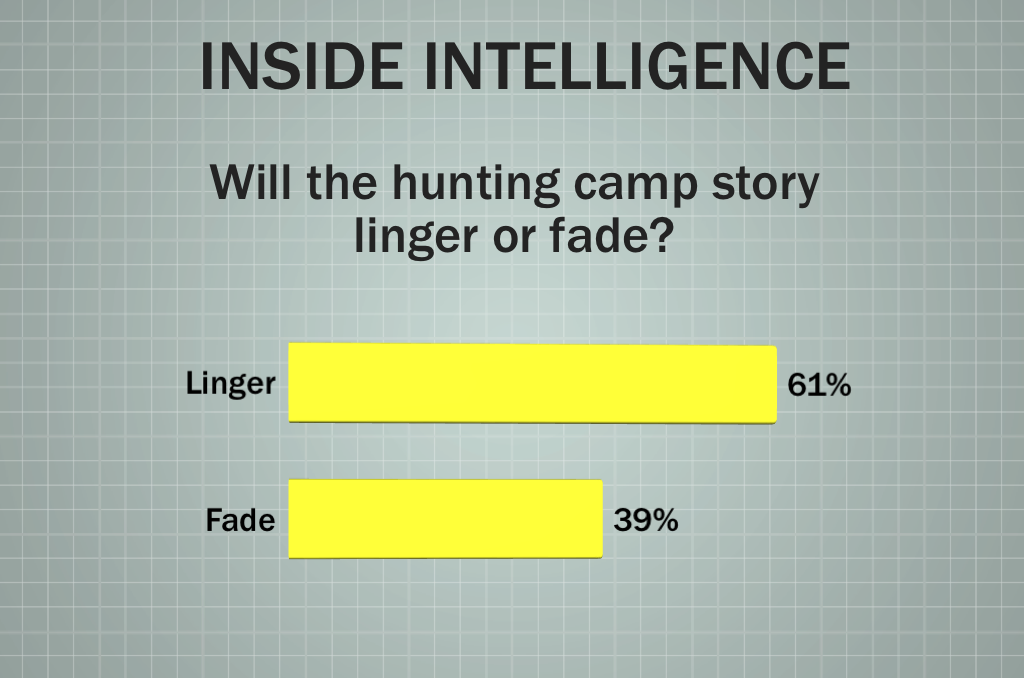 The Washington Post wrote about a hunting camp with a racially offensive name that was rented by the Perry family for years. Is that a story line that will linger through the campaign or one that will fade soon?

• "The story really doesn't have legs."

• "Story was thin. Even Perry's detractors say he's never been a racist"

• "It should fade, but remember, John McCain had an African-American love child when South Carolina rolled around and Bush stomped him there and went on to be POTUS."

• "National campaigns are often defined by small slips that become iconic... Dukakis in a tank, GHWB checking his watch mid-debate, Kerry voting for it before voting against it. As soon as a photo surfaces, it will revive the story."

• "Nice controversy of the week, but let's give the electorate more credit. Economy and jobs are what people care about most right now."

• "Tagging Southern conservatives as racists confirms a bias that most of the country holds. And as Kinky showed, you can't get rid of it by insisting that you're not a racist." 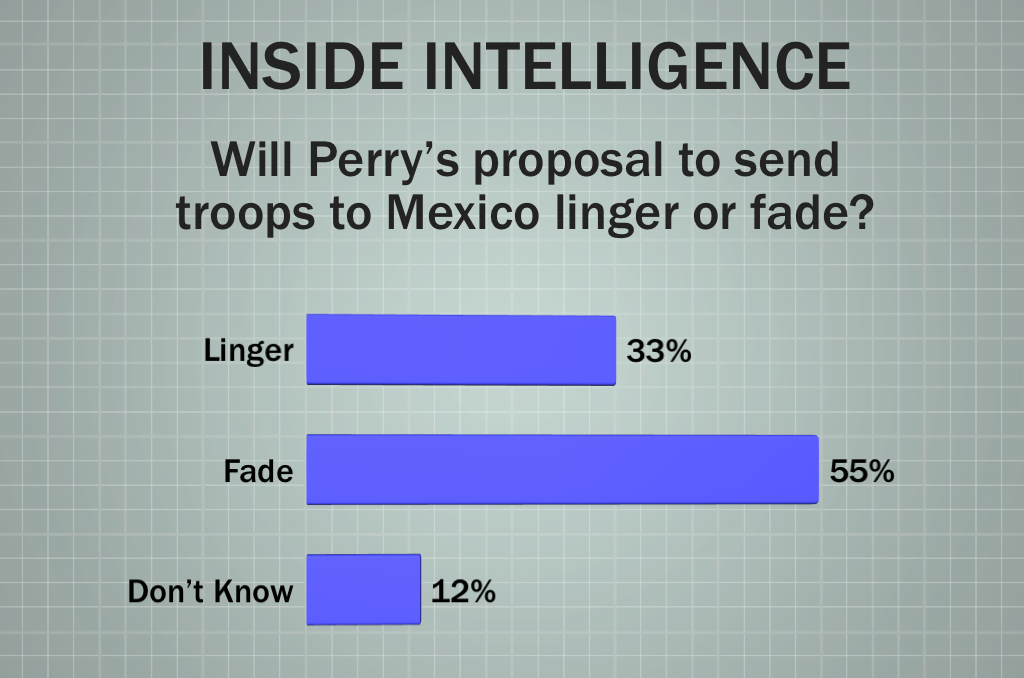 The governor said the U.S. should send troops to Mexico to help that country fight its drug cartels. Is that a story line that will linger through the campaign or one that will fade soon?

• "It's a dumb quote. Typically dumb quotes tend to stay in circulation and be used against you. The prosecutors don't quick asking witnesses tough questions about the best evidence they have, do they?"

• "He began equivocating too fast on the idea for it to have any staying power. One of the few issues that he's right about."

• "Down the line, this could be an issue. It is potentially damaging in showing a lack of understanding of how foreign policy works. Sending troops into Mexico would cause an international crisis, which is why it won't happen. The fact that he doesn't seem to understand that raises questions about his ability to handle a major part of the job of being president."

• "Border violence and lawlessness in Mexico are growing concerns, but most Americans don't view Mexico as an 'enemy threat' and are weary of sustained military commitments." 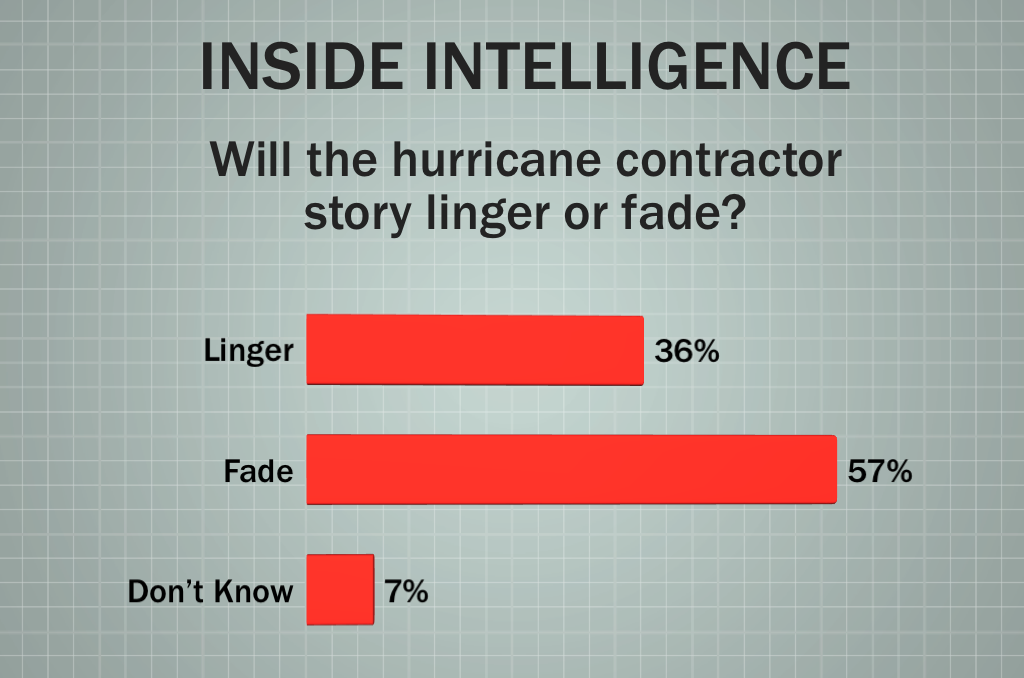 The New York Times and the Austin American-Statesman reported on the state's slow response to hurricane relief and to ties between former Perry staffers and a company hired to help with that relief. Is that a story line that will linger through the campaign or one that will fade soon?

• "I think it will lead to more digging by the national media into Perry's financial dealings with contributors and former staffers."

• "Part of a larger Pay-to-Play storyline that will linger... and will grow. It didn't get the initial traction out of the box that it will get once political opponents pick it up and the reporters begin to dissect the story and the relationships even further."

• "How many times has Perry been elected? How many stories like these have there been? Has anyone beyond a newspaper newsroom EVER cared?"

• "Perry's underlying problem now is his third world governing style.... in which those around him get very wealthy. The hurricane relief story is part of that mosaic." 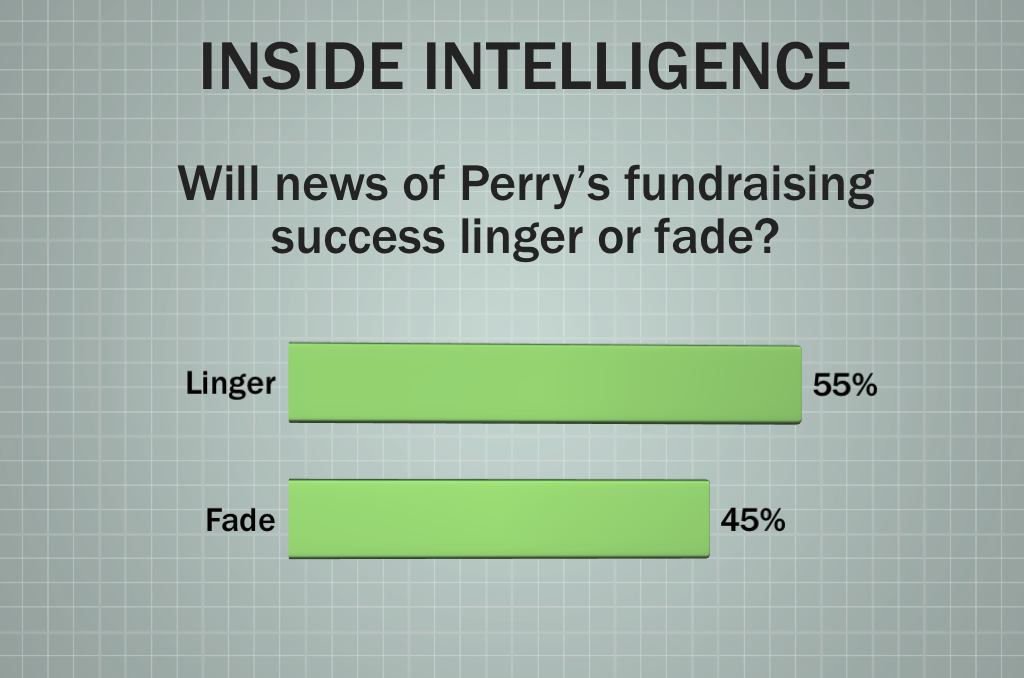 The governor raised $17 million in his first fundraising quarter, far more than most of his opponents, displaying his relative strength against rest the GOP field. Is that a story line that will linger through the campaign or one that will fade soon?

• "Money means nothing when you have a floundering, mistake-ridden campaign. He raised the money before the rest of the country knew anything about him."

• "It has staying power insofar as money tends to breed money in that game. It certainly enhances his credibility among those who will ultimately be paying the freight in this race."

• "The ability to raise cash is the bell weather of campaigns. If he keeps generating those type of numbers, that signals he is still a contender - despite media misgivings."