Amid a record-setting drought and neighborhood-devouring wildfires, we asked the insiders this week about water and fire policy.

They're split on whether to turn temporary water restrictions — on watering lawns, washing cars, filling pools and such — into permanent limitations. They're split — though slightly against — restrictions on development in areas that are prone to fires.

A clear majority — 59 percent — says the state should spend more on fire prevention. And 87 percent say state and local governments should do more to prepare or cope with water shortages in Texas.

In their comments, many of the insiders said the state ought to fund the water plans already approved by the Legislature.

As always, we've attached a full set of their responses; a sampling of those follows. 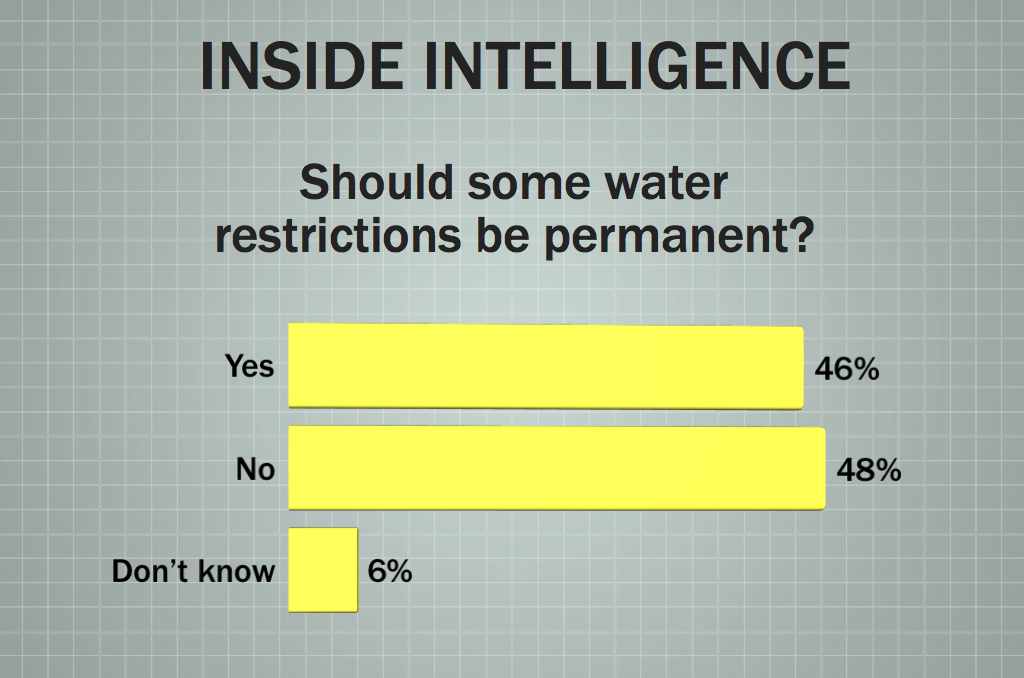 Texas cities are limiting water use in the midst of the drought; should some restrictions be permanent?

• "Why? If these restrictions were in place the last 5, 10 years, it would have zero effect on whether or not a drought occurs."

• "What is wrong with each city continuing to evaluate water restrictions based on local conditions? In my area, despite routine draught, a couple of big rains refills the aquifer."

• "Policies should be set based on conditions. If we conserve to plan for the next 50-year drought we will greatly damage some economic development. Instead limitations should kick in earlier when conditions hit a higher mark. Don't wait for such a disaster."

• "Shutting the water off for lawn care folks will rock the gravel and quarry guys' world. Nobody complains about watering or cutting their yards in El Paso"

• "Until new reservoirs or desal plants are built, conservation is the greatest source of 'new' water. It makes sense to implement some of the less draconian restrictions on a full time basis."

• "Let's be honest - the pride in a green lawn year round just isn't that appealing any more."

• "This is Texas. We could have floods tomorrow."

• "Agriculture is the biggest user of water. Irrigators should bear the biggest responsibility for conservation and paying for a statewide water plan." 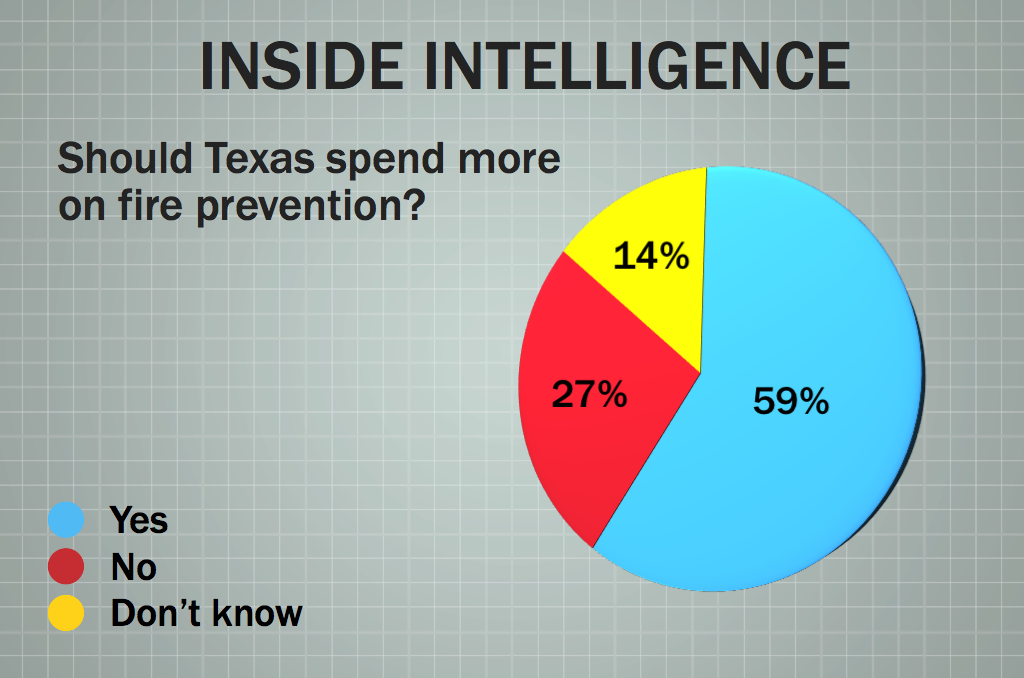 Should the state spend more on fire prevention?

• "No. The state spends too much money already."

• "Its easy to say this now, but obviously, yes. I do think we should have more controlled burns when the long term fire season permits it - the Bastrop State Park was probably full of thatch."

• "Every crisis should not become an opportunity for bureaucratic growth and more government spending."

• "Local funding will insure local control, which is paramount in all types of natural disasters."

• "No, the state should spend more on using fire as a land management tool. Controlled fires rarely result in the tragic property/life losses we're witnessing. With all due respect, you are asking Exactly the wrong question and framing the dialogue backasswards. Fire 'prevention' is a lose/lose/lose. Using fire early and often as an effective public safety and land management tool is always a win/win/win."

• "Maybe a no rainy day fund would be in order" 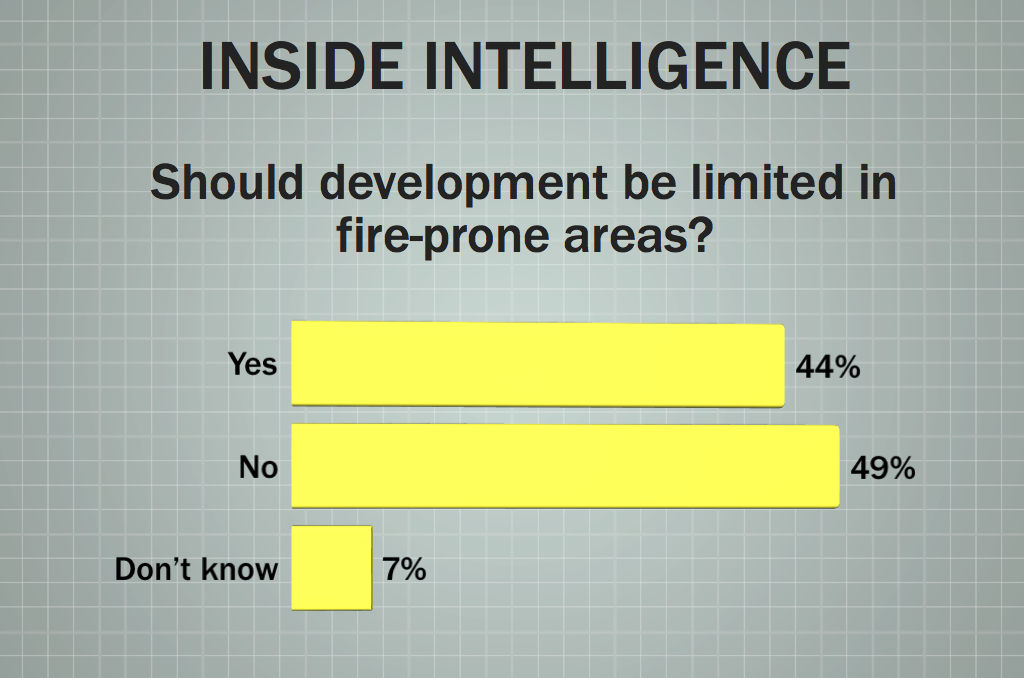 Should development in areas prone to fire be limited?

• "No. It's called private property for a reason."

• "All living quarters should be required to have a cleared perimeter around them. Insurance rates should reflect failure to do so. No subsidies like we have for dumb people living in coastal and flood areas."

• "The Insurance market will probably take care of that, much as it has development in 100 year flood plains."

• "All areas of Texas are prone to fire...so what are we going to do? Limit all development across the state? That is not an answer."

• "It is hard to see the difference between building in some of these places and building on the beach."

• "But I as a taxpayer shouldn't have to pay for this stupidity." 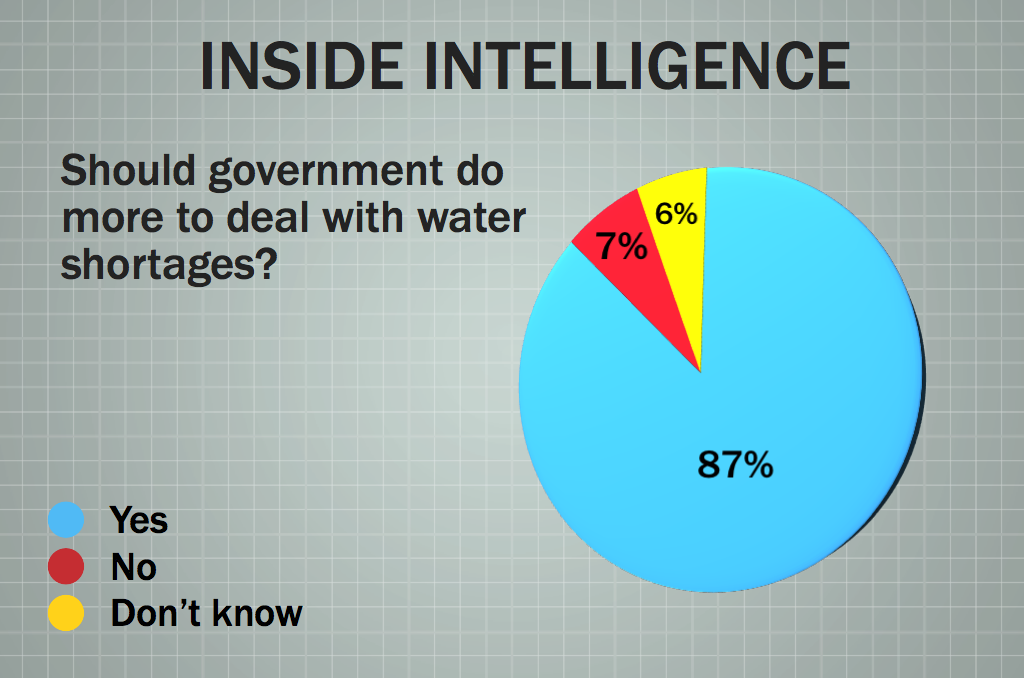 Periodic water shortages are a fact of nature in Texas; should state or local government be doing anything more to prepare or cope with them?

• "It may take a change in culture to convince everyone that they don't need a St Augustine lawn. It will be a long and painful road to conservation, but it's a path that we must embark on."

• "Since nature is apparently changing, the likelihood of more frequent droughts is probably going to increase. El Paso has gotten ahead of the curve; the rest of the state should follow its example."

• "One major question for next session is whether the Legislature finally funds the $53 billion State Water Plan, or whether the strict 'no new taxes/fees' philosophy keeps pushing that off to another day. Sometimes it feels like water supply is the issue of the future - but always will be."

• "The state needs to fund its water plan."

• "Land planning? But if we are against health care imagine the uproar over land use planning in front yards. Get rid of all those water hog Caribbean grasses in dessert prone parts of Texas would be a start. Or; they could just let the market do its magic and go broke like they did in the 50's."

• "This is putting a sharp focus on the need to fund and implement the state water plan which calls for 23 percent of our future water supply to come from conservation. We can't just cross our fingers--it is time to act."

• "I don't like the idea of reactionary policy-making to extraordinary natural phenomena."