The insiders are more convinced that ever that Gov. Rick Perry will run for president. We phrased it in the negative, asking whether they still have any doubt he will run, and 83 percent have no question, while only 15 percent have doubts.

If he does run, a big majority thinks he'll win in South Carolina, but only one in five think the governor would beat the GOP field in Iowa and New Hampshire, and only 42 percent think he'll win in Florida.

After that? The insiders are split in round one, with 38 percent thinking he'll get the GOP nomination and 49 percent saying he won't. Seventeen percent of our insiders think the voters will put Perry in the White House next year, while 68 percent say they won't. 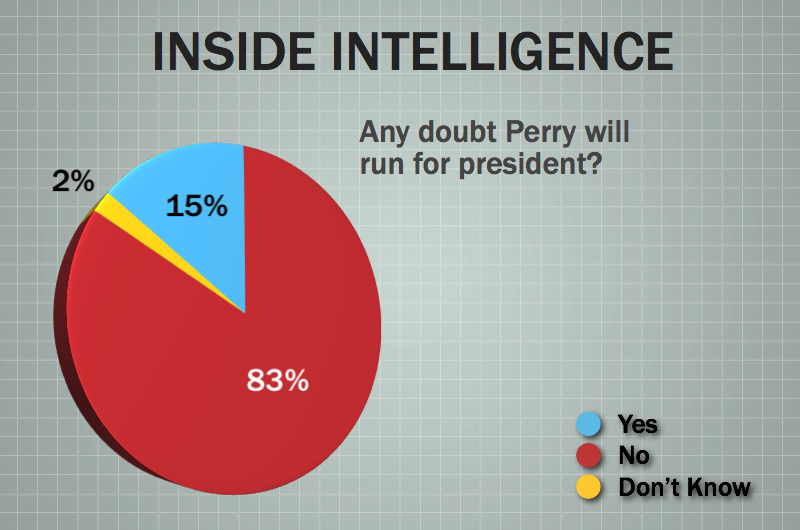 The full set of verbatim answers to our questions is attached, but here's a sampling:

Do you have any doubt that Gov. Rick Perry will run for president?

• "Every thing he has done during he regular, special sessions and since suggest he has long ago made his mind up to run."

• "He'll wait until the last possible moment. If at that point things look sufficiently gloomy, he'll back off and pretend he never was serious about it, and we'll believe him." 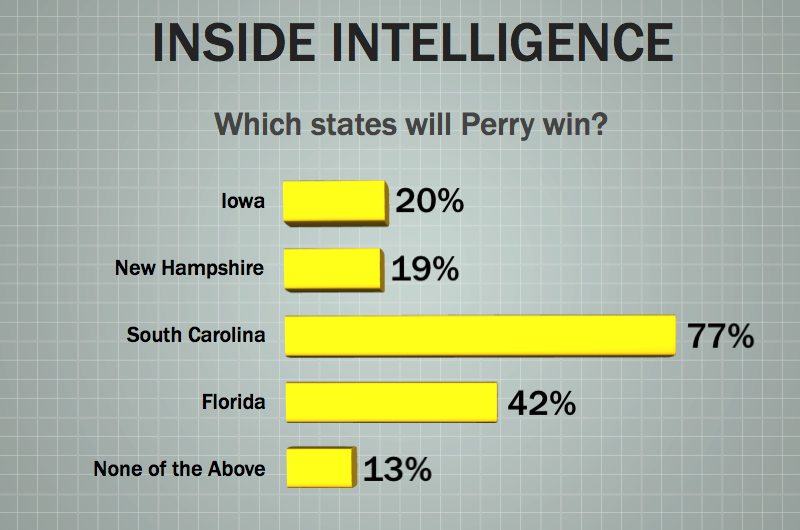 • "Without a doubt. He's been jockeying to position himself for an announcement for the last 18 months. He didn't throw his hat in too early. This allows him to ride the tide...gain in popularity.... and look like a hero that is answering the call to serve."

• "He has a record that makes him a stark choice to the current president."

Do you think Perry will win the Republican nomination for president?

• "Do they care about State's Rights? The Tea Party does. Will a section of that party be able to raise critical examination of the Texas jobs claims?" 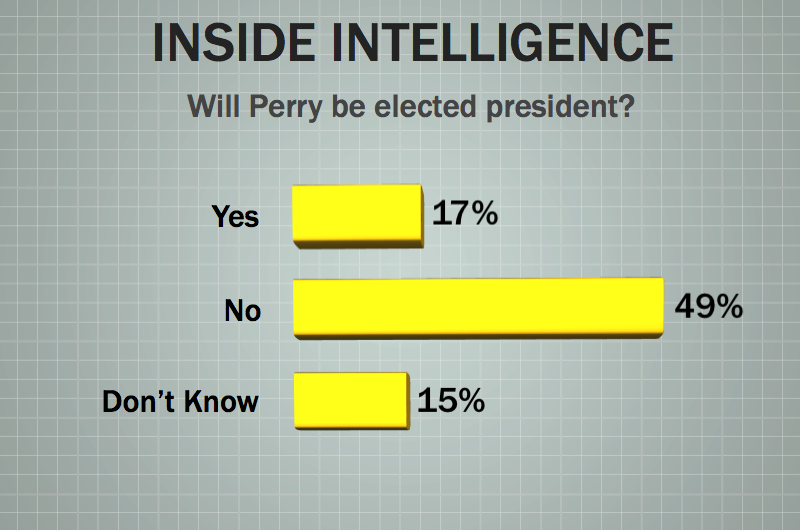 • "No one else can speak to the Tea Party, religious/social conservatives, and Big Business constituencies quite like our Rick. He'll have the money he needs for the primary. Mitt believes in a different prophet, hails from Taxachusetts, and has some explaining to do on healthcare in the eyes of the Republican primary electorate. Yee-haw!"

• "Rick Perry is pitch-perfect for Texas politics, but it is not clear that he is mentally agile enough to make the jump to national politics. His recent stumble on gay marriage and the 10th amendment is a good example of flirting unsuccessfully with nuance." 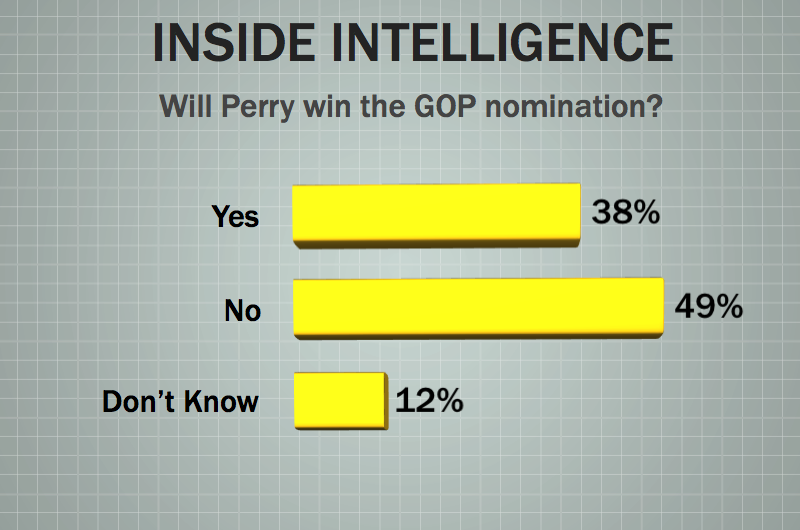 • "He has not done the hard work over his career to prepare for this job. It will show...in fact it's already showing. The party will not nominate a sure loser for an election that the GOP has a good chance to win. Obama is extremely vulnerable, but Perry will be seen as the wrong man to take him on."

Do you think Perry will win the 2012 presidential election?

• "Too many variables outside the GOP nominee's control. The nation has to decide to fire Obama. Perry will give them a clear choice but it is too far away at this point to know what the voters will choose."

• "Obama will paint him as Goldwater -- too radical and dangerous to lead. (How times have changed. What the world wouldn't give for a Goldwater in today's Republican Party.) Look for a 2012 version of the "Daisy" ad. The Bush/Tea Party economy will continue to suffer through 2012, so Obama will have to make the race, in large part, about his opponent to skate through."

• "HELL NO! I think our country has had enough of Texans running the country."

• "He's not as far out as Palin and Bachmann, but he's too far to the right, and he's got way too much baggage to win the presidency."

• "Given the answer to number 3, I can't say he'll win the presidency if he doesn't get the nomination. Although, I've lost every time I bet against Rick Perry. Don't know why this would be different."