You can let your children out of the storm cellar — the Texas Legislature has gone home. Better still, our insiders don't think lawmakers will be back in session before January 2013, when the 83rd Legislature will convene. Only 21 percent of the insiders think there will be another special session before that, while 72 percent think the 82nd Legislature is done (interim studies notwithstanding).

Between the acrimonious ending of the special session and new political maps that change the territory each incumbent will defend, we asked the insiders how much turnover to expect among the 181 senators and representatives. A small group — 14 percent — say more than 30 incumbents will either quit or get beat in the next elections. Another 6 percent say fewer than ten lawmakers won't return. Most expect something in the dozens, with 37 percent saying 11 to 20 lawmakers will be replaced and another 39 percent saying it'll be 21 to 30 lawmakers. 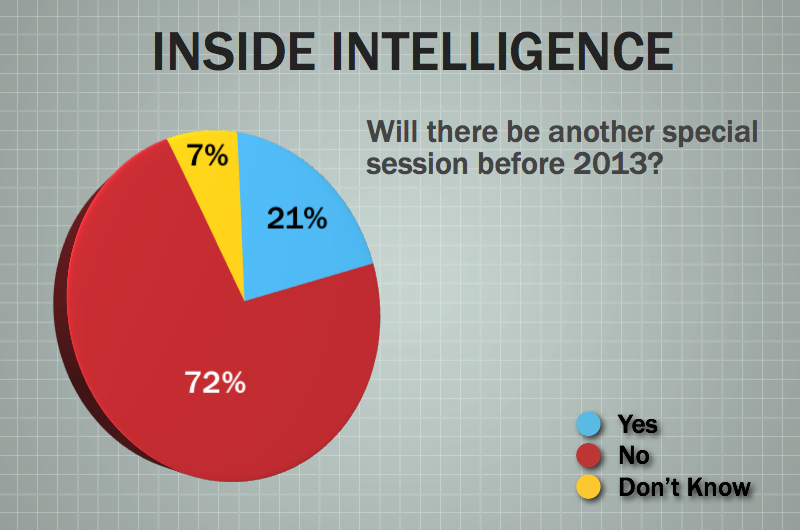 We asked two open-ended questions this week to find out what our insiders think about which of this year's issues will help or hurt lawmakers in the 2012 elections, and what will be the biggest issue facing lawmakers in 2013 (spoiler: state finance issues, almost unanimously). The details for those are in our full listing of verbatim answers (attached), but here's a sampling:

Will lawmakers have another special session between now and January 2013?

• "Not good if you're running for president."

• "Budget problems will force another special sometime in the next biennium — education in particular won't make it under this budget."

• "Guv got everything he wanted or needed. Groping bill, regardless of merits, was just to poke at the eye of the Feds." 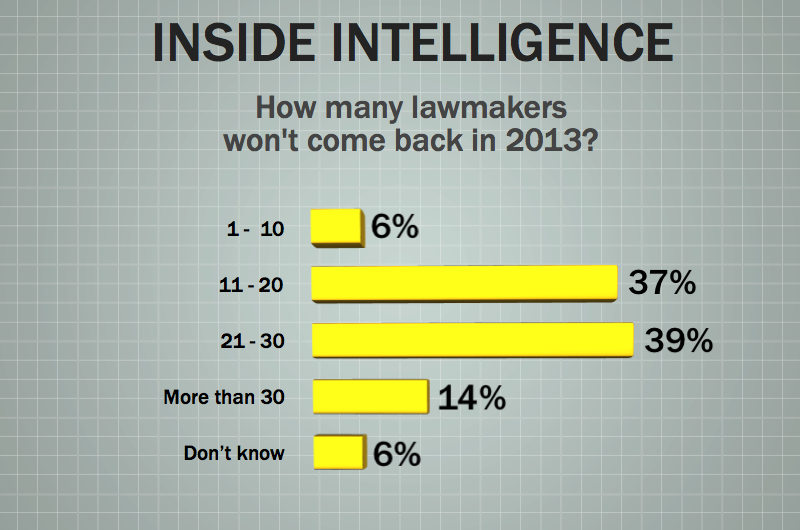 • "The absences by senior Rs during the last days of the special should indicate to all involved that there is no widespread appetite for nonsense issues when they're going to get their heads beaten in by suburbanites who realize the schools they moved to their suburb for just got gutted."

• "Why? Is there anything left that they failed to screw up?"

How many lawmakers won't return, either because of retirement, moving to other office, or losing the 2012 election?

• "Redistricting, what seems to be a total shift of statewide office holders and your normal "I've had enough" will make for a larger than normal freshman class in the House and Senate."

• "Redistricting will help push this number up."

• "For a good number of the House freshmen, it was fun while it lasted. Thanks for playing."

• "Bigger turnover than usual... nobody had a lot of fun this year."

• "I wish some Senators would get out of the way, so that there is some avenue for upward mobility for bright young Reps - from both parties."

What did lawmakers do in the regular or special sessions that will resonate — positively or negatively — with the voters in next year's March and November elections?

• "Balanced the budget without raising taxes, the electorate will decide individual if that is good or bad and that decision will be reflected at the polls."

• "People are ANGRY out here because of the demise of the sanctuary and TSA bills going down."

• "Hard to predict; depends on what is happening with the economy and the presidential election."

What's the biggest problem facing the Legislature that takes office in 2013?

• "The certain budget deficit stemming from the failure to budget adequately for Medicaid. The continued structural deficit in the state's public education finance framework."

• "The most difficult and critical issues that will impact Texans are the decline in resources, the growing need for services and the state’s unwillingness to generate revenue to address these problems. The failure of current legislature to act in the best interest of the people of Texas will force the next legislative body in 2013 to deal with problems that were either left unaddressed or exacerbated by deep budget cuts, e.g., quality education for children in pre-k to 12th grade and for college students in financial need."

• "DEBT! Everyone will learn that HHS will eat every taxpayer alive unless we get serious about our open border policies."