The insiders are tired of the session and are semi-optimistic that there won't be another one. While 42 percent say lawmakers will be back for a second overtime period, 54 percent say it won't happen.

They aren't confident that lawmakers will finish what they've started, though, and they're pessimistic about the Texas Windstorm Insurance Agency, with 47 percent saying lawmakers won't work out their differences by the middle of next week and 39 percent saying they will. Gov. Rick Perry says he'll call lawmakers back if that's not solved. 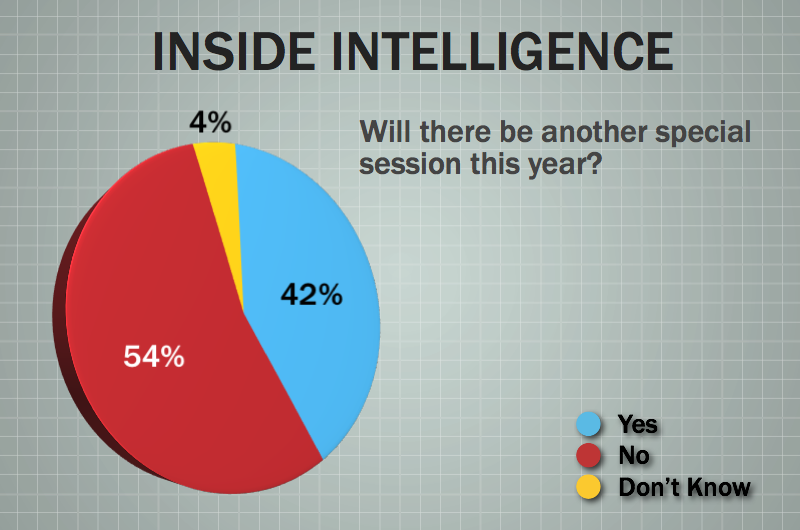 Limits on airport searches and on immigration matters other than sanctuary cities also get negative reviews. But the insiders think lawmakers will resolve the health care, education, fiscal and sanctuary cities by the time the session ends next week.

If they do have to come back, the proximate cause, according to most who picked an issue, will be TWIA.

And to an open-ended question about whether lawmakers will complete their work on every special session issue, they had this to say:

• "The issues with a policy or political imperative will get done."

• "It's a sad state of affairs when WEAK leadership in the House causes both chambers to get work done in a special session with the Governor leading the way. Funny how that works!"

• "GOP can feel free to send those thank you cards to Sen. Wendy Davis." 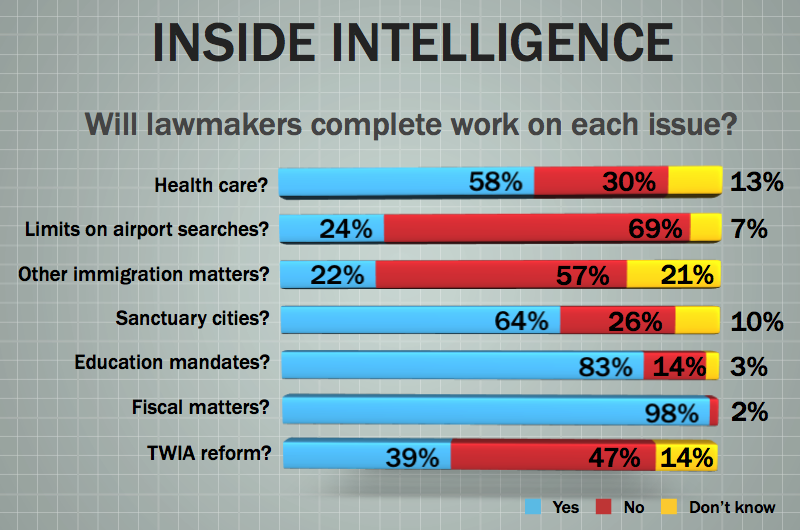 • "The Texas GOP should give Sen. Wendy Davis an award for giving Gov. Perry an excuse for calling the special session and a platform from which to stoke the Presidential flames... Those are the issues that will pass, the ones which bolster his chances in the primaries."

• "Most disinterested group of House members in history. Lege is really pissed about being 'used' by Perry."

• "They'll manage to get in a few more abortion votes as well, because the 40+ from the regular session just wasn't enough for the primary scorecard."

• "TWIA looks hopeless at this point. There seems to be so much bitterness and intransigence on both sides. When a fine man like John Smithee feels compelled to defend his integrity on he House floor, you know it's going to be a difficult one to solve. The TSA bill is purely political theater. It's a sad day when more than 100 House members feel it's politically necessary to co-sponsor this silliness."