For the latest installment of our unscientific survey of political and policy insiders, we looked past the special session to ask about the sooner-than-you-think top-of-the-ticket 2012 and 2014 statewide elections — who's likely to win, and how the dominoes will fall.

We first wanted to know, with former Railroad Commissioner Michael Williams almost certainly out of the U.S. Senate race and state Sen. Dan Patrick, R-Houston, possibly in — and Lt. Gov. David Dewhurst's plans and timetable the subject of rampant speculation — who would win the Republican primary next March. Dewhurst was the overwhelming choice of our insiders, with 43.4 percent. 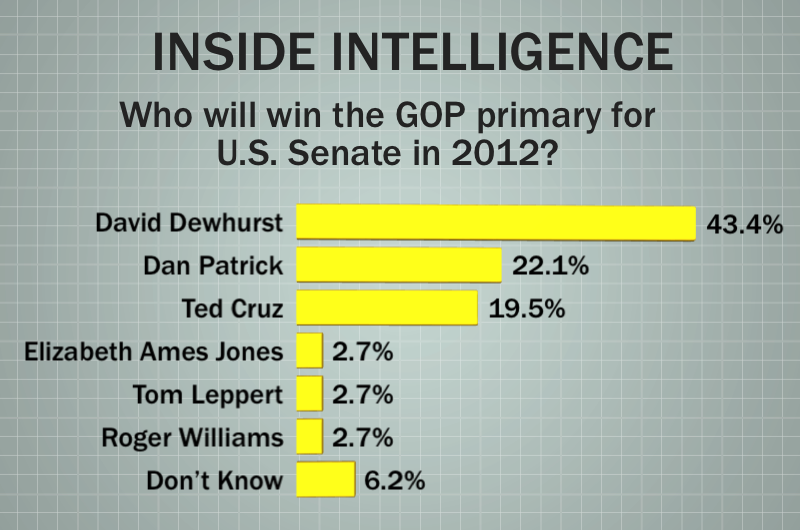 The real drama in the race, it appears, is the battle for second place (and, thus, a spot in a runoff): Patrick and former Texas Solicitor General Ted Cruz were neck and neck,with 22.1 percent and 19.5 percent, respectively. "Don't Know" took 6.2 percent, followed by Railroad Commission Chairwoman Elizabeth Ames Jones, former Dallas Mayor Tom Leppert, former Texas Secretary of State Roger Williams and "Someone Else" with 2.7 percent each. 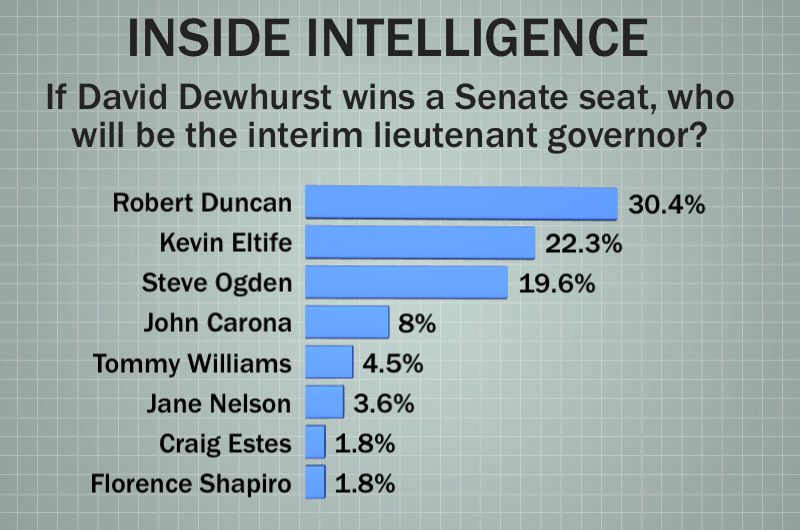 Should Dewhurst win that race and resign his post, who would replace him as lieutenant governor? The 31 members of the Texas Senate would elect one of their own to serve as Lite Guv on an interim basis, until the 2014 election, and our insiders think three senators are in the running: Robert Duncan, R-Lubbock, who was the choice of 30.4 percent of our respondents; Kevin Eltife, R-Tyler, who garnered 22.3 percent; and Steve Ogden, R-Bryan, who got 19.6 percent. No other senator cracked double digits. 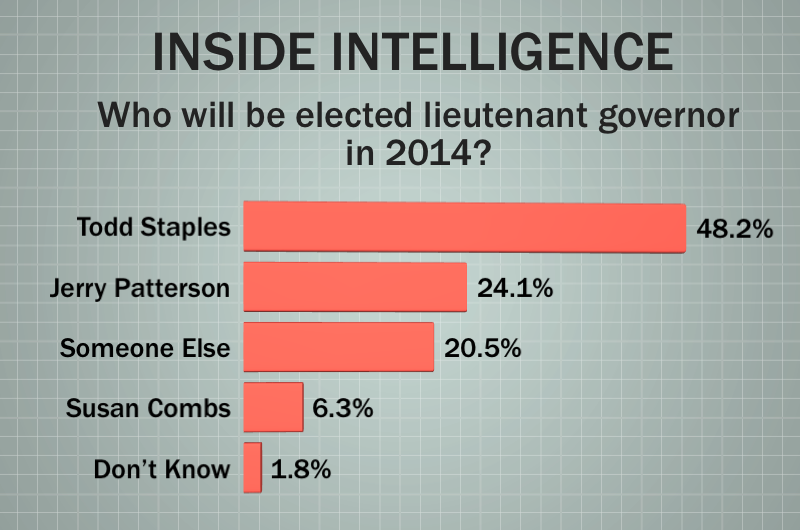 Come 2014, we'll have a race for lieutenant governor that's shaping up as a battle of three heavyweight GOP statewide officeholders: Comptroller Susan Combs, Land Commissioner Jerry Patterson and Agriculture Commissioner Todd Staples. We asked which of these three was likely to win, or whether another Republican — perhaps the interim? — has a shot. By a wide margin, our insiders think Staples has the edge; he was the choice of 48.2 percent of respondents, while Patterson took 24.1 percent. "Someone else" was the preference of 20.5 percent. Combs lagged behind with 6.3 percent, and "Don't Know" had 1.8 percent. 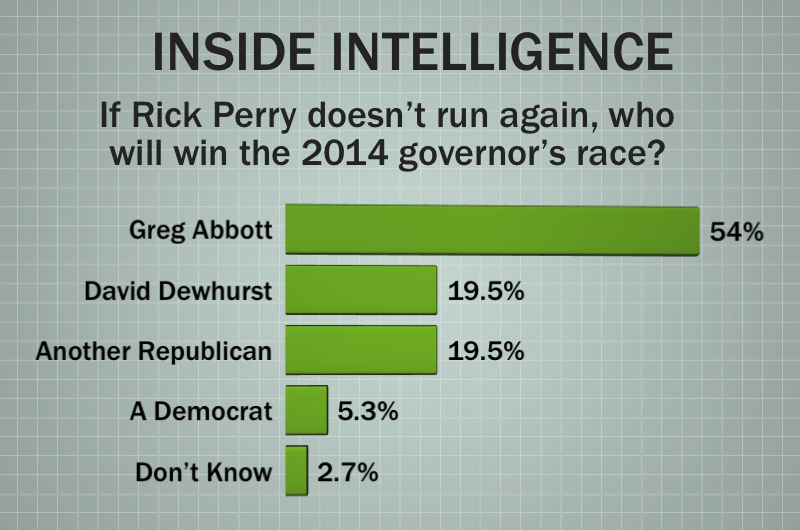 Finally, we wondered about the race for governor. Regardless of whether he ends up in the White House — or a nearby building — in 2012, Rick Perry won't seek a fourth term in 2014, right? (You never know, but let's assume.) So who's going to succeed him? A majority of our insiders, some 54 percent, say the next governor of Texas will be Attorney General Greg Abbott. Dewhurst and "Someone Else" were tied for second with 19.5 percent each. A generic Democrat pulled 5.3 percent, and "Don't Know" took 2.7 percent.