It's a good thing Rick Perry says he's not running for president — only 4 percent of Texas Republicans say they'd vote for the governor, according to the latest University of Texas/Texas Tribune poll.

"This is a major question for a guy who's getting national buzz," says Daron Shaw, co-director of the poll and a government professor at UT. "He hasn't convinced Texans that he's a presidential front-runner."

Not that he's trying to. Perry has said repeatedly that he's not a presidential candidate without squelching campaigns to draft him as one.

Perry's not even the top-rated Texan in the race. That distinction gos to U.S. Rep. Ron Paul, R-Surfside, who's at 10 percent among registered voters who say they will vote in the Republican primary. The leader of the pack — and it's a narrow lead in a pack without a clear front-runner — is former Alaska Gov. Sarah Palin, at 12 percent, followed by former U.S. House Speaker Newt Gingrich, at 11 percent, and former Arkansas Gov. Mike Huckabee, 10 percent. Former Massachusetts Gov. Mitt Romney and U.S. Rep. Michele Bachmann of Minnesota each have the support of 7 percent, followed by celebrity businessman Donald Trump, 6 percent; Minnesota Gov. Tim Pawlenty, 4 percent; former U.S. Sen. Rick Santorum of Pennsylvania, 3 percent; and Gov. Mitch Daniels of Indiana and former Gov. Jon Huntsman of Utah, at 1 percent each.

One in 10 Republican voters want someone else, and 14 percent say they don't know whom they'd vote for in a GOP primary held today. Several of the candidates on that list, including Huckabee, Trump and Daniels, have dropped out since poll was conducted.

It's still early, cautions Jim Henson, who teaches government at UT, runs the Texas Politics Project and co-directs the poll. He doesn't think Perry's numbers are a big deal. "At this point, he's clearly not seen as a candidate," he says.

Support for "red meat" Republican candidates on the presidential list is stronger among men, Shaw says. "Baby boomer women are a huge issue for Republicans," he says. "When they have trouble with those women, that's when they get wiped out in Dallas, that's when they win by 6 points statewide instead of by 12 or 14. You have to watch your flank, and that flank is women who are worried about education, about safety net issues, about the fabric of their communities. …They get concerned about gutting the whole thing."

Texas remains Republican territory, however. Asked how they'd vote in a general election for president, 30 percent of all registered voters who participated in the poll said they would vote to re-elect Barack Obama, and 48 percent would vote for the Republican — whomever it ultimately may be — in the race.

"Other than a pretty narrow band of true independents, we are settling into a very ossified, polarized politics here," Henson says. "We're seeing that in the Legislature, we're seeing it in public opinion, and I think we're probably seeing it around dinner tables and at family gatherings all over the state." 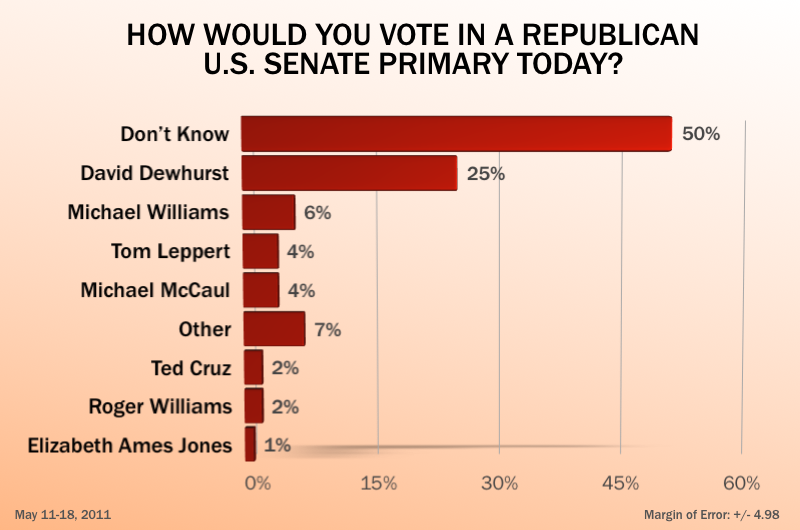 Most Texans haven't made up their minds about whom they like in the Republican and Democratic primaries for the U.S. Senate seat being vacated by Kay Bailey Hutchison, other than expressing a strong preference for a Republican.

On the Republican side, 50 percent say they don't know how they'd vote; 7 percent say they're looking for someone not on our list. As for the list, Lt. Gov. David Dewhurst is the leader, with 25 percent, followed by former Railroad Commissioner Michael Williams, at 6 percent; former Dallas Mayor Tom Leppert and U.S. Rep. Michael McCaul of Austin, 4 percent each; former Texas Solicitor General Ted Cruz and former Texas Secretary of State Roger Williams, 2 percent; and Railroad Commissioner Elizabeth Ames Jones, 1 percent. 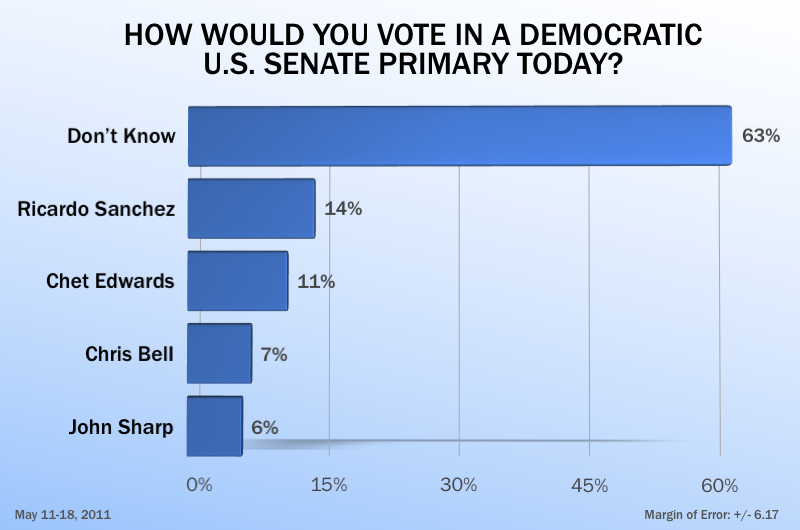 The Democrats have even more undecided voters, at 63 percent. The newest candidate in that conversation, retired Gen. Ricardo Sanchez, led the way, with 14 percent, followed by former U.S. Reps. Chet Edwards of Waco, 11 percent, and Chris Bell of Houston, at 7 percent; and former state Comptroller John Sharp, at 6 percent.

The Republicans start with an advantage in a general election — no surprise in a state where voters haven't elected a statewide Democrat since 1994. A generic Republican senatorial candidate would beat an unnamed Democrat by 46 percent to 30 percent.

Obama remains unpopular in Texas, with 35 percent approving of the job he's doing and 55 percent disapproving. And the voters who disapprove of him are intense — 46 percent say they disapprove strongly.

They're harder still on Congress, with 16 percent saying they approve of the job federal lawmakers are doing (only 1 percent strongly approve), while 62 percent disapprove (35 percent strongly). 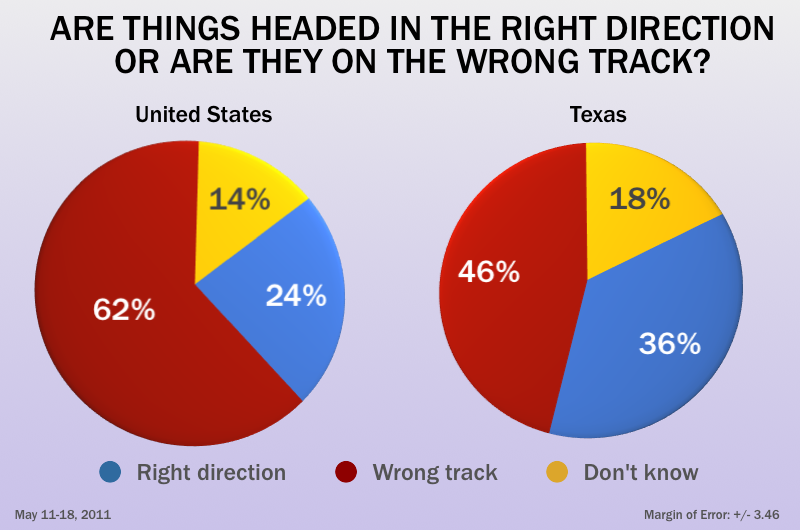 Once again, the respondents displayed the appeal of the Tea Party. If that were an organized party in the next congressional elections, 33 percent would vote for the Democrat in the race, 24 percent for the Tea Party candidate, and 17 percent for the Republican, with the remaining 27 percent saying they don't know which one they'd choose.