Kel Seliger decided to run the redistricting marathon by saving up his energy until the end and then running a sprint. The Amarillo Republican's Senate Redistricting Committee met less than three weeks before end of the session to consider Senate district maps that had at that point been public for less than 24 hours. He told members — this was on Thursday — that they had until 5 p.m. to get their amendments to him and to make sure they were legally vetted and so on. And he said he planned to vote on the plan, along with a House plan already approved on the other side of the rotunda, on Friday. That sets up a full Senate vote for as early as next week.

The fast pace is probably of small consequence to most senators, who've been fooling with maps alone and in groups for months, but it doesn't allow much time for the voters to do anything about the new plans. And some voters might want to talk about it, in places like Taylor, Tarrant, Travis, Bexar counties, to name a few. 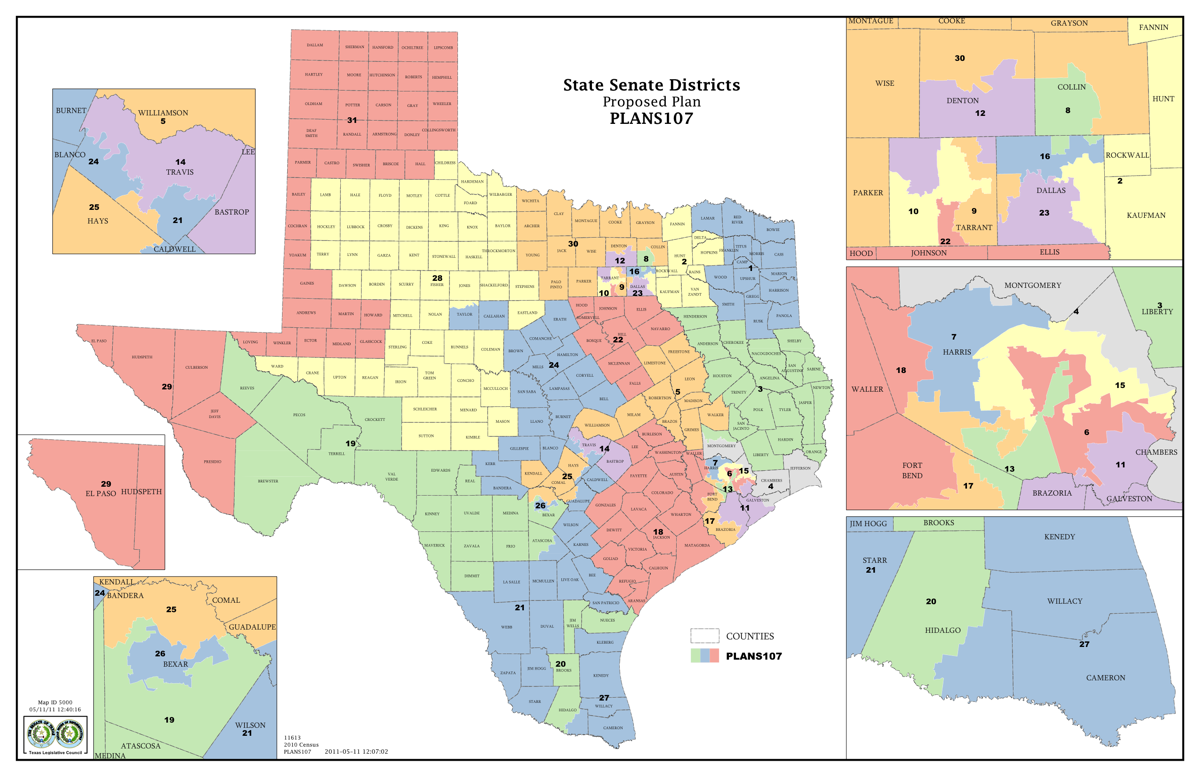 • No incumbent is paired with another.

• Only one incumbent, Fort Worth Democrat Wendy Davis, gets a new district that's decidedly hostile to the incumbent. Davis upset Republican Kim Brimer last year and argues that her district's minority voters should be protected by remaining in the same district. In Seliger's map, Sen. Brian Birdwell, R-Granbury, gets a chunk of Tarrant County for the first time and those voters will find themselves in a solidly Republican district. Birdwell doesn't have any of Tarrant County in his current district; in the Seliger proposal, he would pick up 104,703 people — 80 percent of them black or Hispanic. He's not opposed to his new map, but told Seliger's committee, "I wanted to keep it the way it was."

• Travis County currently has two senators: Kirk Watson, a Democrat who lives in the county, and Jeff Wentworth, a Republican who lives in San Antonio. In the Senate proposal, Watson gets part of Travis and all of Bastrop County, moving that county from Republican Sen. Glenn Hegar's district and into the Democrat's. Parts of Travis, meanwhile, go to two new senators — Troy Fraser, R-Horseshoe Bay, and Judith Zaffirini, D-Laredo.

• Having Zaffirini in Travis County means, among other things, that she no longer would represent any of Bexar County. San Antonio would have three districts, including one (Democrat Leticia Van de Putte) completely within the Bexar County lines, and all three would be represented, at least for now, by residents of Bexar County.

• The West Texas tussle between Fraser and Robert Duncan of Lubbock was settled at Taylor County's expense. Rather than leave that completely in Fraser's hands, or take it and use the population there to shore up the shortage in Duncan's current district, the Senate map splits the county with 30 percent for Duncan and 70 percent for Fraser.