This week, we asked the insiders about politics, starting with how the president, who was dragging the sack in Texas this week, will do in 2012 compared with 2008. Half think he won't do as well, 21 percent think his fortunes here will improve, and 26 percent say it'll be about the same.

We asked if any of the statewide Republicans are likely to lose their seats in the next two cycles and almost half — 49 percent — don't think any of them are in trouble. The comptroller and a statewide judicial spot are most likely, with 14 percent each, followed by the U.S. Senate race, which 12 percent chose as most vulnerable.

Republicans in Texas haven't lost a statewide election in 17 years and might keep that up. But, we asked, are any statewide officials vulnerable to challenges in future primary or general elections? Yes, according to 71 percent of the insiders.

The full set of responses to the survey attached, but here's a sampling:

President Obama was in Texas this week, talking about immigration and about his reelection campaign. Will he do better or worse in Texas in 2012 than in his first election in 2008? 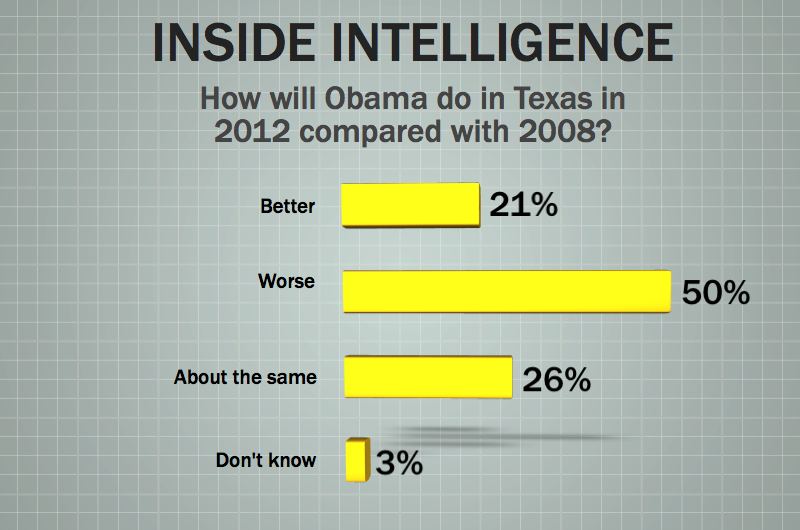 • "He will be re-elected nationally, but in Texas, he will turn out at least as many Rs as Ds."

• "The enthusiasm behind Obama is now gone. His campaign is lying about playing seriously in Texas, and when that becomes apparent, he'll lose by 15."

• "Honestly, in the next 2 years, how could he possibly create a better environment in Texas than was in place in 2008?"

Republicans haven't lost a statewide race in Texas since the mid-1990s. What office, if any, are they most likely to lose in the 2012 or 2014 elections? 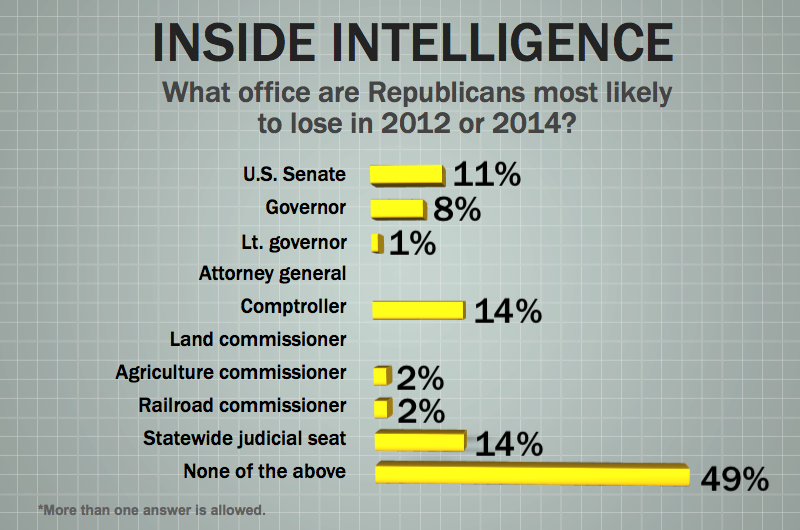 • "Democrats could win in 2012 is real money is invested in expanding and mobilizing the Latino electorate. Otherwise, it will be another 20 years plus before they win any seats at the statewide level."

• "Any seat from Railroad Commissioner down has possibilities for Democrats - with a good candidate and running a strong campaign."

• "Unless there is a scandal, GOP will be safe this decade."

• "No viable statewide candidate, an even more limited fundraising base = snowballs chance"

• "Are you kidding me with this question? Once can write-in a candidate like "Mickey Mouse" and that'll beat any democrat on the ballot."

Are any of the current statewide officeholders vulnerable to challenge in the next primary or general elections? 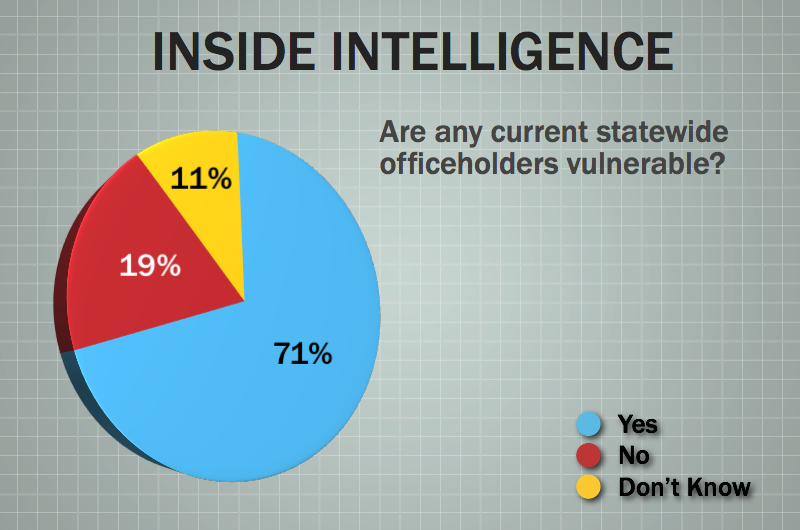 • "Susan Combs in a primary challenge."

• "Susan Combs - you can't give away millions of Texans' social security numbers and $25 million a year to a bunch of French race car drivers AND be pro-choice and make it --- Combs & GOP voters, A Perfect Match, they are not!"

• "Any reasonable, indeed any responsible Republican is vulnerable to primary challenge in this environment. I think the top of the ticket could be vulnerable in 2014."

Texas lawmakers are almost finished with their regular session. What have they done that will resonate with voters — positively or negatively — in the next election cycle?

• "The anti-immigrant legislation and passage of a budget that does not make students, the poor and middle class America a priority will harm the GOP in the long term."

• "It's all about education. Everyone talks a good game about education but tough times demonstrate true priorities and those electeds who voted to cut public schools will have a lot of explaining to do."

• "Anti-immigrant legislation will resonate positively w/GOP base and negatively with Latino voters."

• "Voter ID very popular and easy to understand. The budget, while more important, is just a big blur."

• "Slightly negatively, but in reality other than Republican Party activists, most voters will be unable to recall much about this past session come November of 2012."

• "No taxes and preservation of the Rainy Day Fund."

• "Gutted the public school system while leaving $9 billion in the rainy day fund."

• "Budget will be a liability once it sinks in. Voters will simply not understand that the Legislature could not find the money to fund education. I do not believe raising taxes would have resulted in a better reaction. There is no requirement that voters be rational."