This week, we asked the insiders about the fallout from the data breach at the state comptroller's office, where 3.5 million names in a database were left unprotected on the agency's website for a year. The names, along with social security numbers and other information, came to the comptroller from the teacher and employee retirement systems and from the Texas Workforce Commission. Comptroller Susan Combs stayed in bunker mode for more than two weeks; as our survey was ending, she began a series of media interviews and mea culpas, apologizing and explaining how the breach happened and what she's doing about it.

An overwhelming majority of our insiders — 81 percent — say the state should bear whatever costs the people on those lists incur as a result of identity theft that results from the agency's blunder; 16 percent said it shouldn't. They're split pretty evenly when asked whether the state can be trusted with private information. And a small majority of 53 percent believes this is a big political problem for Combs; 40 percent think it will blow over.

The full set of comments is attached, but here's a sampling:

Should the state pay the expenses and cover the losses of people whose identities are stolen as a result of the breach? 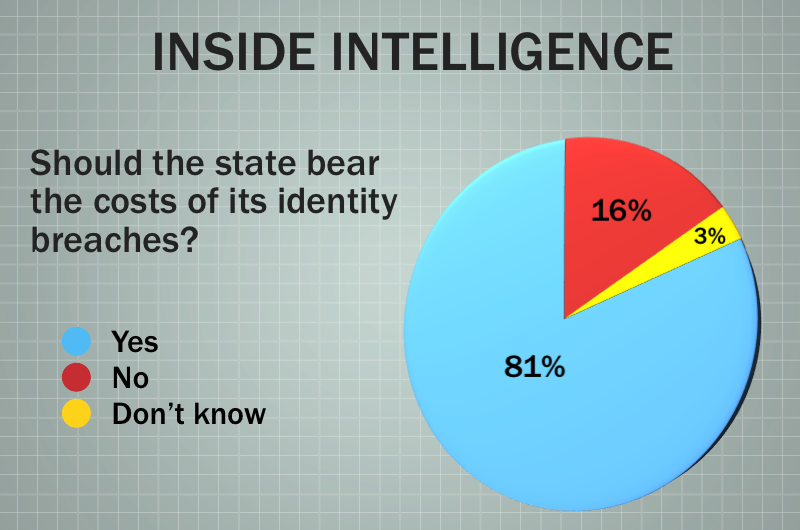 • "The state does not have the money to pay these losses."

• "It's an absolute travesty, not only that this information has been exposed, but how it's been handled. I've never seen such finger pointing and attempts to scapegoat so many other agencies and staff. It just perpetuates great distrust in government."

• "The state is liable so yes within reason"

• "If American Express did the same thing, they would have to cover my expenses."

• "Yes the state should assist those affected - the data was available for one year. Stolen identity is a serious issue - expensive and lengthy to resolve. These individuals are required to submit the most sensitive information to governmental entities that guarantee their information is safe and secure."

• "Pottery Barn principal applies. If the State of Texas broke it, we need to pay to fix it."

How trustworthy is the state government with private information? 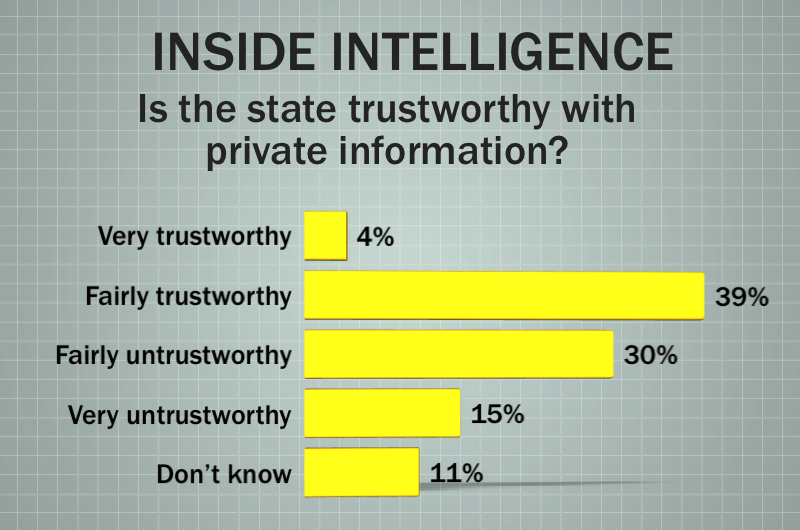 • "I think having to answer 'don't know' is pretty scary."

• "Painfully obvious now that they are/were not trustworthy."

• "This is an isolated incident by someone asleep at the switch."

• "Real and possible breaches are becoming increasingly common, but in fairness it's not just state government that seems to be unable to secure the data it collects."

• "The tragedy of this debacle is the distraction it creates for proposed improvements to other critical state databases. For example, Texas is finally discussing reforming the state's costly and outdated 'opt-in' immunization registry. Even though proposals will increase privacy and save the state money, progress has been slowed by this story."

• "Humans are humans and mistakes will be made. It's amazing this hasn't happened before."

How will this affect Comptroller Susan Combs' political aspirations? 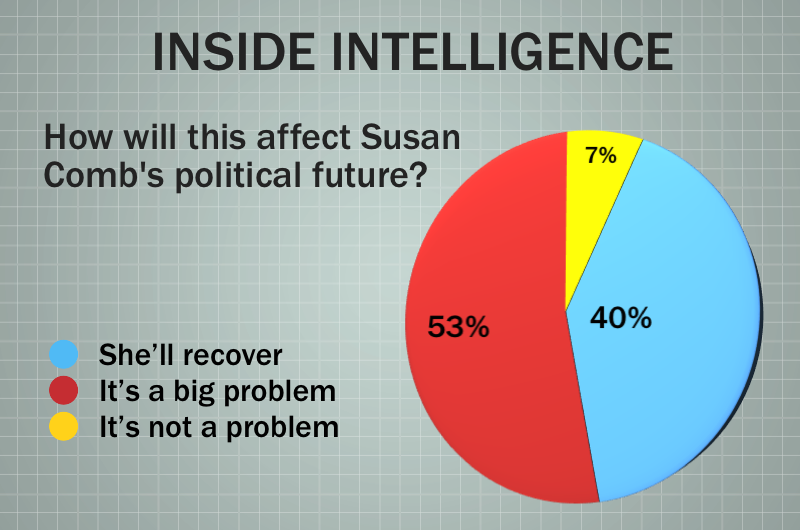 • "It demonstrates a lack of proper management and oversight."

• "She angered just about everyone across the political spectrum. The fall-out from this is just beginning. Wait until more and more people are touched by identity theft."

• "Compounds problems with the appliance rebate program (twice), lack of progress on ERP, lack of popularity of Formula One deal and of course missing the revenue estimate. ... Makes it harder for her to run for Lt. Governor."

• "If the Governor never even had a scratch on him from the Gardasil flap, then the tall lady won't see a scar over this."

• "She was well positioned to move up to Lt. Gov., but she is not quick on her political feet, so she has not gotten out in front of this. She looked very uncertain and defensive. She has time to recover if she has the skill."

• "Stick the proverbial fork in her. She's done. This problem will linger and the bumbling way she handled will make great political ads."

• "People forget -- over and over and over again. This is occurring too far from an election to ruin her career. But she will be beat over the head with it for years to come."

• "It helps her that the victims are state employees and teachers, who are 1) not natural Combs supporters anyway, and 2) not the focus of a lot of care and compassion from other voters. If these were taxpayers, her career would be in real danger."