This week, we asked the insiders about taxes and budget cuts — the order of the day.

Some lawmakers have talked about revising the state's business margins tax, and 57 percent of the insiders think they should do that. Only 12 percent think it ought to be left alone, and 30 percent would scrap it and replace it with something else. But if you read their comments, they don't appear to think the Legislature will do anything dramatic about the tax this session.

That tax has an exemption for any business with less than $1 million in sales. The exemption expires at the end of the fiscal year, and it would cost about $150 million to keep it going. Most of the insiders think lawmakers will renew the exemption — 53 percent. Less than a third — 31 percent — say lawmakers won't do it, and 16 percent checked the "don't know" box. 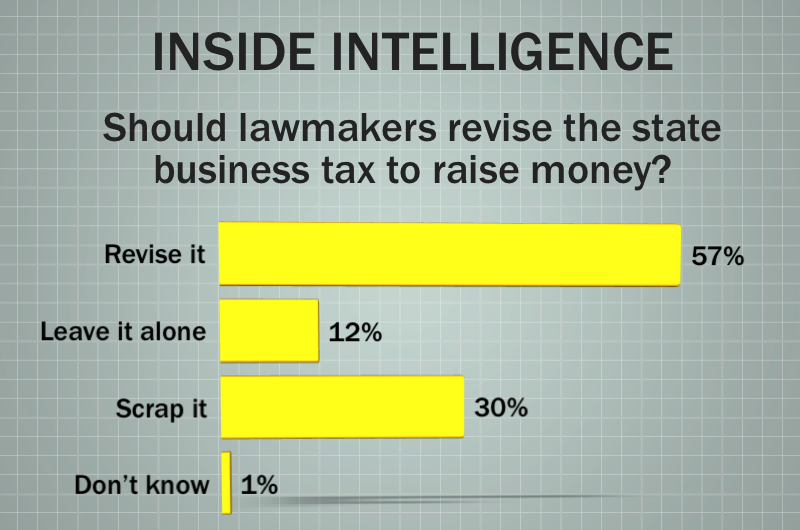 The full verbatim answers — we also asked about the "smartest" and "dumbest" cuts in the budget — are attached. Here's a sampling:

Will legislators spend $150 million to renew the $1 million exemption from the business margins tax?

• "They should as a matter of public policy let it expire. Therefore they will probably renew it."

• "And it is fun watching the tax watchdogs explain why raising the money to do this does not violate the PLEDGE." 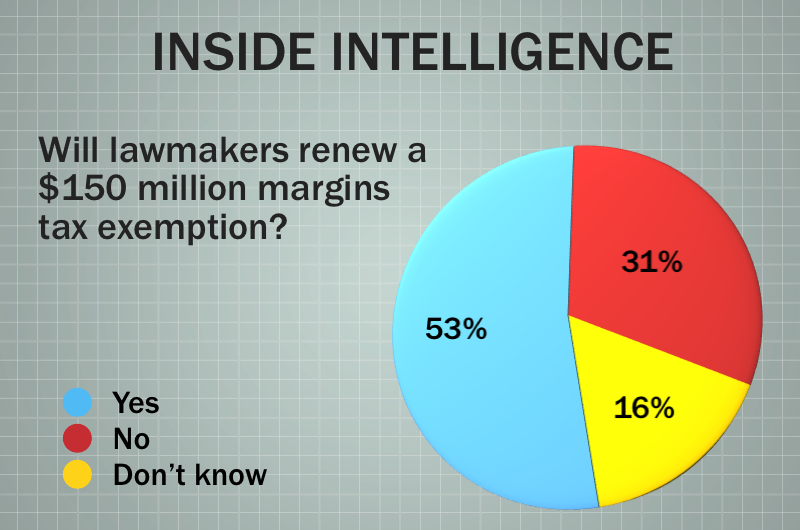 • "This will be a battle worth watching to see just how much power the ideological anti-government crowd actually has in the Lege."

• "Absolutely. Repeal of the exemption will be branded a tax increase and thus it won't happen. Plus, hard for the Democrats to blast the current exemption, considering that one of their own (Former Ways and Means Chair Oliveira) was its author last session."

Does it make sense — politically, and as a matter of policy — to revise the state's business tax, or should it be scrapped and replaced with something else?

• "An equitable income tax for all, rather than an onerous tax that affects the state's employers, would be far more fair and would undoubtedly raise considerably more money."

• "For the state to grow and succeed, business needs to step up and be an active voice for education. No workforce, no business. It ain't that hard."

• "#1 We can't go back, legally or as a practical matter, to the old system. #2 The franchise levy in Texas is proportional to what other states raise, so we've got it just about right as it is. #3 The franchise tax is NOT the cause of the current fiscal troubles. 'Fix the franchise tax' has become lazy political shorthand for 'let's raise a whole bunch of new tax money to plug the future structural shortfall in the budget.' If you tripled the franchise tax that change would not fix the budget."

• "It has underperformed and needs revision. But lots of other tax laws need revisions, too."

• "Poor plan poorly executed ab initio. This notion that it is 'under-performing' or that it is somehow 'structurally flawed' is nothing more than euphemistically complaining that the rate isn't high enough. But be assured that sometime before football season, someone will decide that it's really not a tax bill after all if all they're doing is 'tweaking the formula'. Nonsense of course, but there it is."

• "Fixing the broken margins tax is a policy necessity and a political nightmare. Thus, nothing will be done til the lights really are turned off."

What's the smartest cut lawmakers have made in their state budget proposals?

• "Their own legislative budgets."

• "In this environment there are no smart or dumb cuts. Everything got whacked, so I would not give credit or blame to the legislature for any of the specific cuts."

• "State-Fed Relations. Since Perry is fundamentally opposed to federal funding, it doesn't appear that we need someone to lobby for more money."

• "Nothing like 'Wow, that was really smart' comes to mind."

• "Anything that costs federal matching money."

• "Reducing the size and scope of government intervention into the lives of free people is never dumb."

• "It's hard to know where to start, but all the cuts in child protective services, adoption services, etc., are going to come back to haunt us."

• "Cutting mental health. The result tends to be an increase in spending for county jails."

• "The research is clear and obvious, the sooner we invest in young children the bigger the returns on that investment. Cutting education and health care for kids under 5 makes absolutely no fiscal or moral sense."