For this week's informal and unscientific poll of insiders, we followed up on President Barack Obama's announcement that he will seek re-election in 2012. It was no surprise, but now it's official. We asked whether Obama's numbers will be better than the 43.7 percent he received in Texas in 2008, and more than half think he'll do worse. About 30 percent think he'll do about the same, and only 18 percent think he'll do better now than then.

Democrats got a boost in Texas in 2008 even with Obama losing the election, and 41 percent of the insiders think they'll do even better in 2012. About a third think they'll do worse and 23 percent say it'll be about the same.

And what of the Republicans, the beneficiaries of a huge election success in 2010? Two thirds of the insiders think 2012 will be a worse year for the GOP; 10 percent think it'll be better, and 20 percent expect things will be about the same. 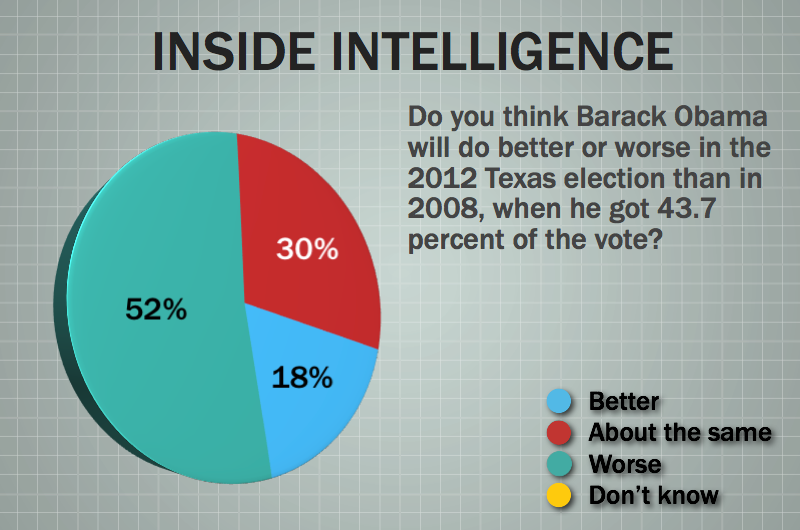 We asked for comments, too, and the full set is attached. Here's a sampling of those:

• "This is not Clinton '96. Clinton knew how to tack to the center. Obama is more of an ideologue. His percentage will go down as long as the Republican nominee isn't a cadaver."

• "The African American and Hispanic voters are less motivated." 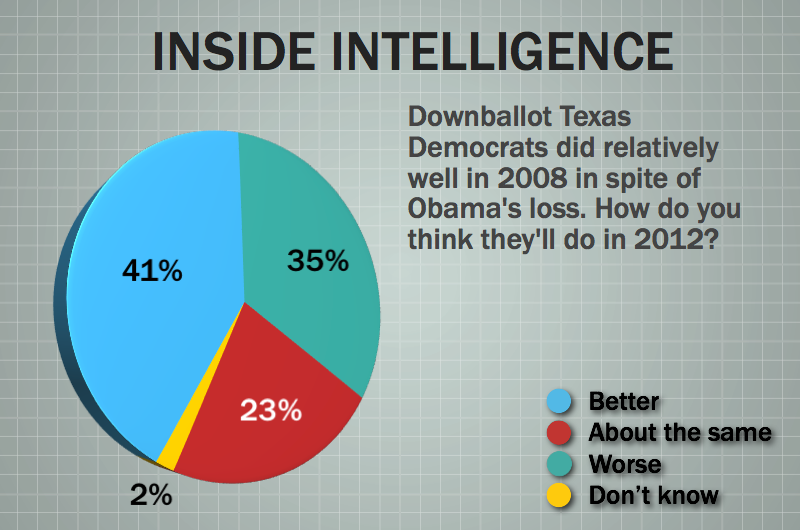 • "The one portion of the American electorate I expect Obama to do better with in 2012 is Hispanics. Fallout from the Clinton primary, and perhaps some racially based fear/mistrust had him underperform with Texas Hispanics, mostly due to depressed turnout. The immigration backlash against Republicans and more comfort with Obama among Hispanics should make for better performance, particularly as they rapidly increase in population and Anglos decline. Obama's prospects for improved performance would increase further if, as is now being discussed, his campaign makes a real effort to play here. Spending money to increase registration and turnout would help. He should be able to get at least 45% in Texas, and possibly as high as 47%, depending on the GOP nominee."

• "The emperor has no clothes." 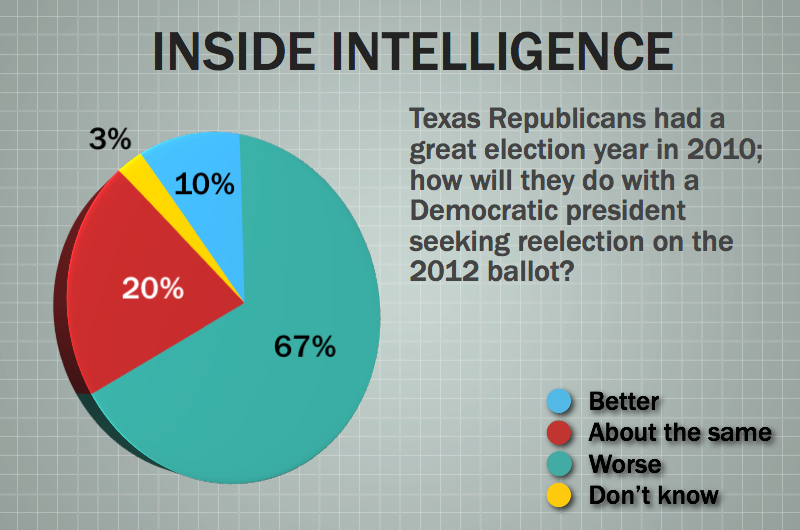 • "I think the Gov. and Legislature are about to turn a lot of independents into Democrats by decimating the schools, health system, highways and infrastructure of the state. The voters last time said to economize the state -- not destroy it. Obama won't carry Texas, but I think his percentage will be higher this time than last."

• "The enthusiasm BO generated in Texas and elsewhere is long gone."

• "Depends considerably on who the Republican candidate is, but for now I'll assume the GOP selects a reasonable candidate (someone like Daniels, Pawlenty, or Christie and not like Romney, Gingrich, or Palin) and therefore that Obama will do worse."

Down-ballot Texas Democrats did relatively well in 2008 in spite of Obama's loss. How do you think they'll do in 2012?

• "Except for maybe Dallas where blue is the new green"

• "Weariness with lack of GOP leadership is spreading."

• "Republican gains in 2010 reflected the lower turnout of a midterm election. With Obama back on the ballot in 2012, Democratic turnout should improve."

• "While the number of Republicans in the Texas House will drop, it will be the result of the redistricting process, not the effect of Obama or the Texas Democratic Party in 2012."

• "The open United States Senate seat, the redistricting process – Texas gaining the 4 new congressional seats and the current anti-immigrant legislation, budget cuts that harm Latinos and working families will help the democratic in Texas during the 2012 general elections."

• "Obama continues to be highly popular with African Americans, but that is not entirely the case with Hispanics, who are disappointed in the administration's decision to put off strong immigration legislation in before the 2010 elections. Moreover, the zeal that existed in 2008 among younger voters generally is not the same at present; surely the campaign will work to restore that excitement, but that is very hard to achieve after four years."

Texas Republicans had a great election year in 2010; how will they do with a Democratic president seeking reelection on the 2012 ballot?

• "No difference statewide, but they will lose a dozen or so legislative seats, and not just because of redistricting"

• "Obama will be toxic in Texas everywhere but in South Texas and in the inner cities."

• "Worse not because of Obamanose but because post redistricting will not support the current number of House republicans."

• "After the 2010 election, there is nowhere for them to go but down. The number of legislative seats they currently hold is simply not sustainable, especially since reapportionment means fewer seats in heavily Republican rural Texas. Further, presidential elections produce much higher voting among minorities, which means Democrats do better than in gubernatorial years."

• "Worse. They won't do near as well in Harris Co. as they did in 2010 (not that Dems will do as well as they did in 2008, necessarily). They'll still lose Dallas and Travis. Tarrant will/should/could stay purple. There's a chance for Dems to make gains in Fort Bend and Williamson. And Republicans will all-but-certainly see their House majority drop around the neighborhood of 12 seats."