Our insiders strongly agree that the Legislature will ratify the Rainy Day Fund bailout of the current budget, with 92 percent saying the House and the Senate will produce the needed supermajority votes to spend that money to balance the current budget deficit.

While they think there are other pressing concerns, like protecting schools or nursing homes, most insiders say the strongest impulse in the Legislature right now is to cut spending; 51 percent said that alone, and another 17 percent chose "cut spending and protect the Rainy Day Fund." 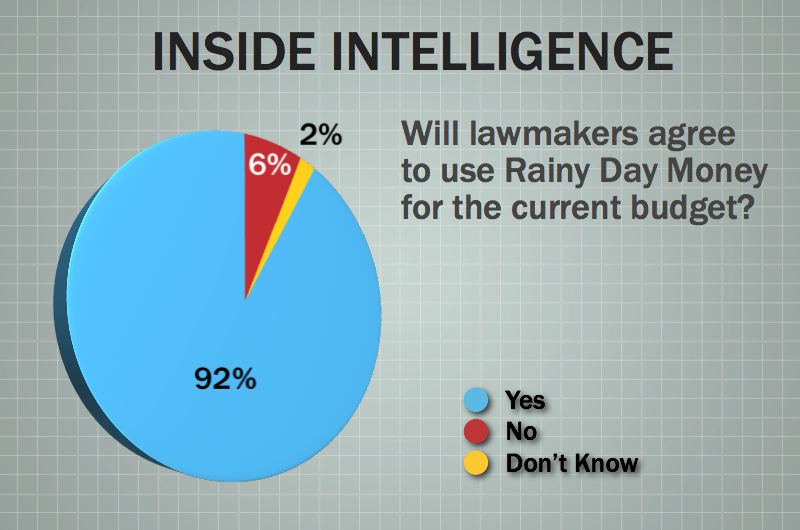 And we took their temperature again on ways to raise money to balance the budget: 65 percent are predicting fee increases and 51 percent think the Legislature will tap the Rainy Day Fund to balance the next budget. One in five (21 percent) chose legalized gambling — we didn't ask which type — will be a budget balancing issue this time. Only 13 percent predicted a tax increase. Full comments and verbatim answers to our poll questions are attached, but here's a sampling from this week's Inside Intelligence poll:

Budget writers want to tap the Rainy Day Fund to balance the current budget. Will three-fifths of the Texas House and Senate go along with that?

• "They certainly don't have many options now that the fiscal year is about over!" 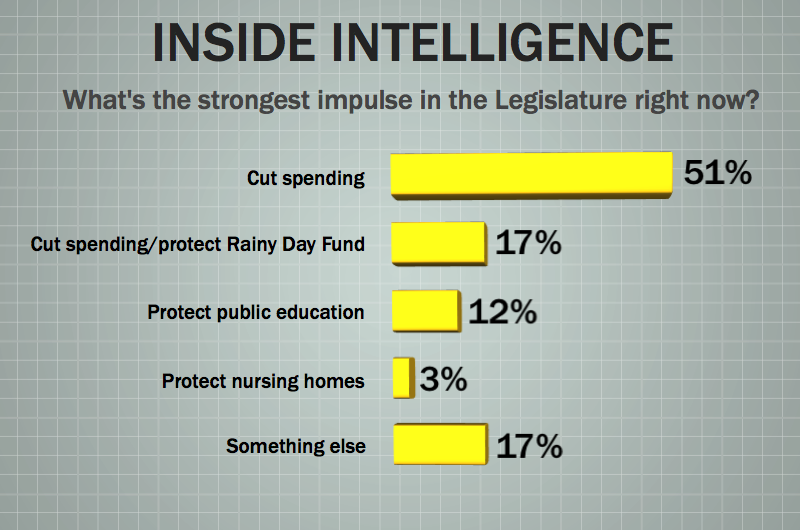 • "Not in the House, too many new members who will afraid of the perceived political fallout from the right. Doable in the Senate."

• "Senate is an obvious yes. House will go along with it now that Governor Perry has provided cover."

• "Perry said it's ok. He can't use it against them now so they will go along."

• "Now that Gov. Perry was forced to support the use of RDF, both chambers will follow suit and git r dun!"

What's the stronger impulse in the Legislature right now? (Verbatims from those who answered 'something else'.) 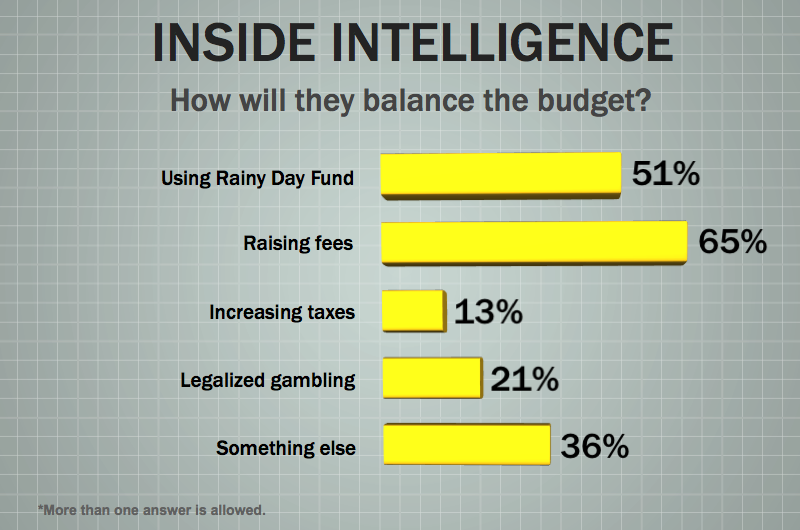 • "For the majority the impulse would be to protect education and perhaps nursing homes, but they are intimidated into a support of 'cut spending'."

• "The strongest impulse is: choosing not to decide. None of the items on your list are currently 'the stronger impulse.' That's why we aren't making any progress on covering the shortfall."

The governor opposes using any of the remainder of the Rainy Day Fund to balance the 2012-13 budget. How will the Legislature get the job done?

• "The Lege has no choice but to use the RDF. Perry will veto is and call a special session. He'll claim that he's standing up to big government interests regardless of party."

• "It will not be possible to make some of the cuts necessary without shifting the costs to local entities. Those elected officials in turn will have to prioritize their spending and the cuts will be blamed on the legislature anyway."

Lawmakers are in a tight spot on the budget, with other issues looming. How do you think this will this play out?

• "Republicans were elected on the promise of cuts. Why should anyone expect them not to cut? The only place where there seems to be a crisis atmosphere is in the media and at the offices of teachers unions. If there is no money, you can't spend it. It is time EVERYONE come to grips with that."

• "There is the real possibility of a deadlock which carries the budget process into special session. Sen. Ogden does not have the votes EVEN IN HIS OWN COMMITTEE for a budget which guts public education and guts care for the elderly. The Senate may very well muster the fortitude to play a game of chicken with the governor."

• "With much wailing and gnashing of teeth. They are slowly sobering up. Acceptance is the last stage."

• "If 12,000 people show up for a party at your house, they tend to get attention. The longer the session grinds on, the more ordinary people understand about this mess and why we are in it. Public anger will continue to grow and legislators will have no choice but to uncover their ears."

• "Not well. Cancel your summer vacations."

• "I don't know. I can't remember ever being in this kind of environment."