Our insiders took on school finance this week, and they're not optimistic that there will be a happy ending.

Lawmakers have proposed spending $10.4 billion less than the Texas Education Agency says it needs to keep things running like they're running now. Is that current level of services sufficient for public education? Two-thirds of our panel said no, it's not.

Do they think the Legislature will close the gap? Yes and no. Twenty percent say the schools will end the session $10 billion short, while 70 percent say they'll end up less than $5 billion short. The remaining 10 percent split between full restoration, more money than requested and don't know. 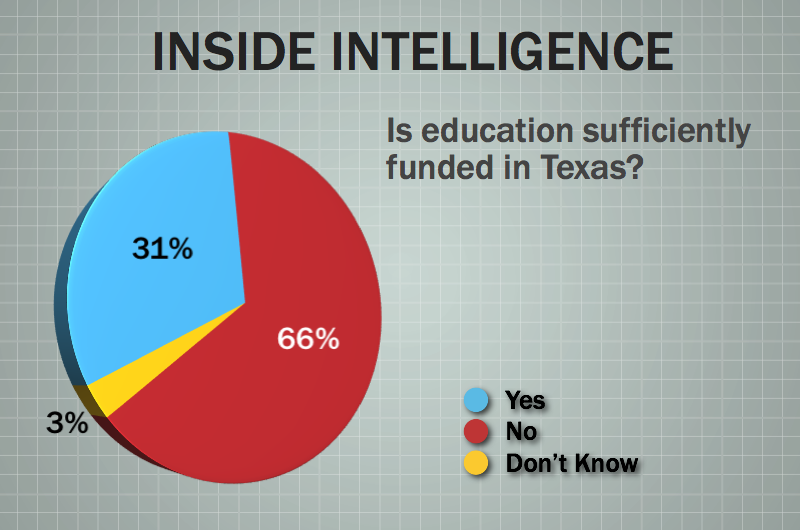 Should lawmakers free local schools to raise their property taxes to make up for money lost to state cuts? Most of our insiders — 70 percent — said yes, while 27 percent said no.

Our open-ended question this week was "What areas of education spending should be on the cutting block?" The full set of answers is attached, but here's a sampling: 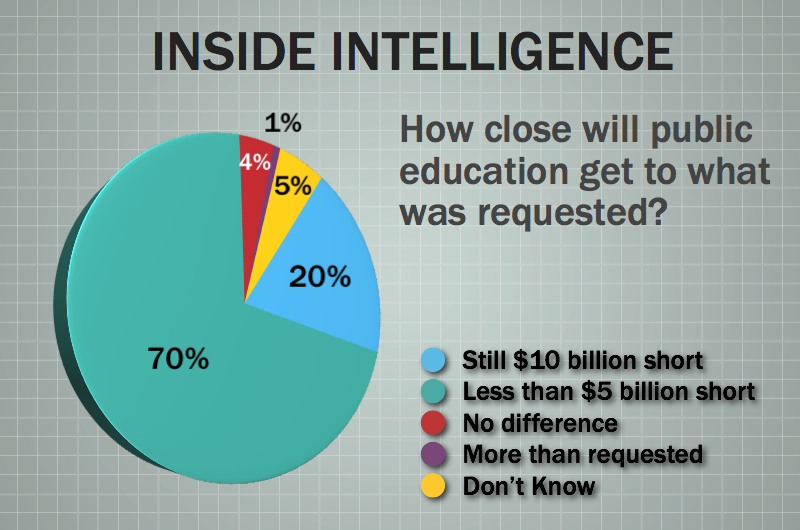 • "School district administration is bloated, and everything else is starved."

• "We should be investing in public education, not cutting it to the bone."

• "The pensions of school teachers. They should have 401k plans like the rest of us and have to pay for their own healthcare." 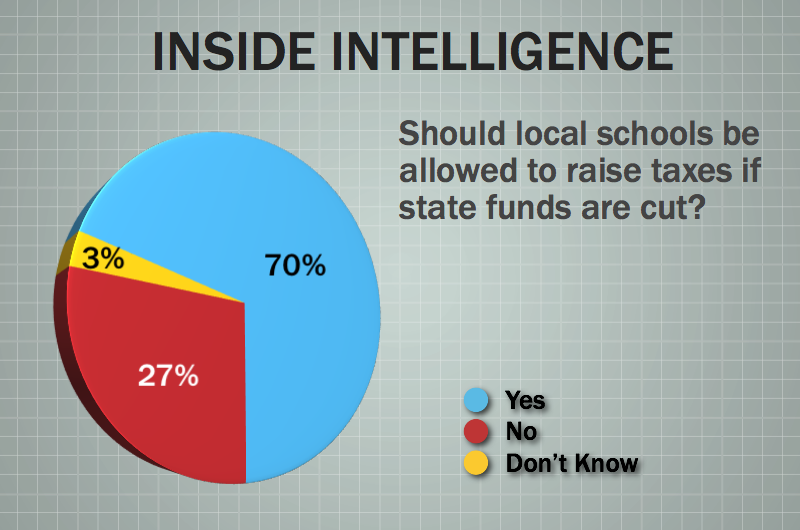 • "General administration, ridiculously expensive and counterproductive pension policies and practices, labor practices that reward retaining ineffective teachers, inefficiencies due to too many districts, local and state programs with no record of success in boosting student achievement, sports excesses, and inefficiencies due to inadequate use of technology"

• "Start with non-classroom expenditures. Next: support and administrative staffing has increased 20 percent since 2004, while student population has risen 7 percent. Moving from the current 1:1 teaching/non-teacher ratio to a 3:2 ratio would produce $3.25 billion in savings. Force a reduction in administrator pay and bonus packages. Abolish the regional service centers."

• "Wrong question, Texas ranked in the bottom quarter of states in per capita student funding throughout the 20th century and into the 21st century. Given the demographic changes taking place Texas needs to step it up, not cut back."

• "Well now, that question reveals the conservative bias in the media! Do we just assume that we're getting overeducated in Texas, and it's time to trim it back a little? I know it's pointless to ask Who's taxes should be raised so that our kids are a little smarter when they get to tomorrow? But still! The arrogance of the assumption that, without question, some education should be cut back is just more than I can stomach."

• "This is a no brainer. Consolidate school systems and drastically cut administrative expenses. If that doesn't do, fire teachers."

• "None. Our entire education system from pre-K to post-secondary has been on a starvation diet for far too long. After over a decade of Republican mismanagement, Texas is already seeing the fruits of a policy that is virtually guaranteeing the creation of an entire generation of poorly educated Texans who will be ill equipped to compete and contribute to our state's prosperity. This is the ultimate mortgaging of our future, and I fear we will discover too late that it was a subprime one."