The phrase has the burnish of a truism in this outpost amid the vast, high-desert expanse of far West Texas, about 50 miles north of Big Bend National Park. The 400 or so residents here are closely watching the fate of their tiny public school — and working hard to keep it open.

The senior class at Marathon Independent School District will have a valedictorian this spring — Michelle Campbell, 17. She is also the only senior. With a pre-kindergarten through 12th grade enrollment of just 56 students, Marathon ISD is one of the smallest districts in the state.

But for Marathon’s ranchers, artists (trendy Marfa is 60 miles away), a growing number of retired baby boomers and the occasional political celebrity (the large family ranch of the state comptroller, Susan Combs, is nearby), the school’s fate is critical to the survival of this remote town known for its blend of the frontier and funky.

Now a new initiative, a foundation created by residents to help support the school, offers fresh hope for the area. And if what is happening here is successful, it could serve as a model for rural towns scattered across Texas looking to shield their way of life from the death knell of school closings. 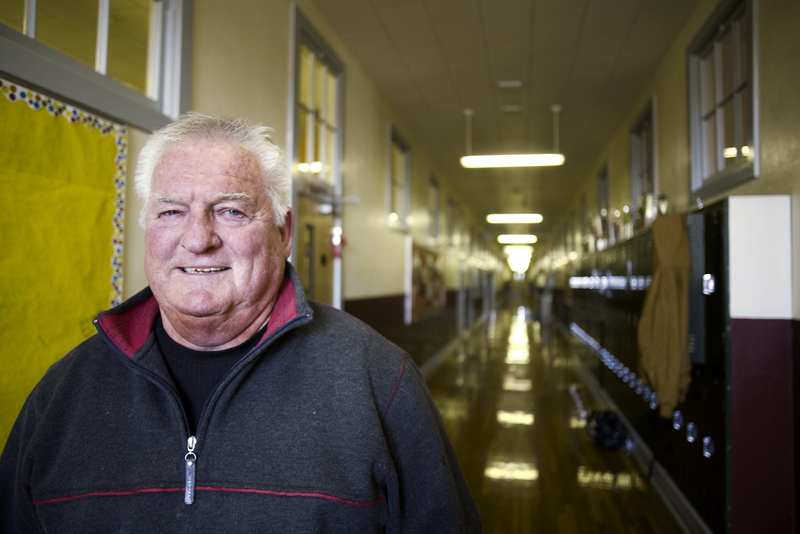 Long before the state Legislature convened this month and presented initial budgets that would cut $10 billion in financing to public schools, Marathon ISD was in severe-enough trouble that the Texas Education Agency appointed a monitor to watch its finances.

When Neal Harrison became superintendent in 2009, the district had just finished paying off a $248,000 loan to cover its debt, which left it short on savings. He points out that because of the district’s size, $1,000 is “like talking $100,000 to somebody else.” Harrison scrutinized every line of the budget as the district went into a state of financial exigency last year, which allows the district to eliminate jobs.

Under his supervision, the school did away with four staff positions, reduced stipends for extracurricular activities and travel, and combined grades that had only a few students. Now, Harrison said he expects the education agency to end its conservatorship by the end of the school year.

The struggle to keep the school doors open in Marathon attracted the attention of Claudia Huntington, a San Antonio resident whose husband is a local landowner. In June, Huntington helped create the Marathon Foundation, and since then, three ranching families in the area, with more to come, she said, have contributed more than $200,000.

The foundation has developed eight grants intended to help the district compete for teachers and students. They include $20,000 a year in college scholarships for students who have attended Marathon for at least four years, and $4,000 signing bonuses for teachers.

“We want Marathon to stay healthy,” Huntington said. “We are very aware that without a school that isn’t going to happen.”

For the town’s major employers and property holders — like the historic Gage Hotel — a school is vital to keeping families, and therefore customers and employees, living in the town. But Huntington also said their work is motivated by the belief that it is the right thing to do.

Having a school helps maintain property values, too, said Marci Roberts, who owns the local grocery store. Marathon’s economic vibrancy distinguishes the school from those in other rural areas, she said.

“Marathon is pretty thriving. It’s a major tourist town,” Roberts said. “You close the school, and now that’s at risk.”

Harold Cook, an Austin Democratic political strategist with a home in Marathon, agreed.

“For those who lament the decline of small-town America, try being a small town, otherwise vibrant, building on a solid economic development foundation, while attempting to explain to potential business owners why there are no local schools for their children,” Cook said. “It just doesn’t work.”

Harrison said that through scrimping and keeping a close watch on spending, the school now has money in the bank. And even with the impending reduction in state money, he expects it will stay there.

While the district will feel the cuts, Harrison said, it will not be as bad as it would have been a few years ago. “Then, we’d be out of business,” he said.

For now, consolidation, not money or low test scores, is Harrison’s biggest worry. What weighs on him is a suspicion that neighboring Alpine, with a population of 6,400 and the seat of Brewster County, would not mind absorbing those 56 students and the property values that come with them. If that happened, students in Marathon would be bused 30 miles up the road.

Consolidating small districts has not gained traction in the 82nd Legislature — so far — as a solution to the state’s education budget woes. That may change as the administrative costs of running the state’s schools come under scrutiny. For the past several legislative sessions, Rep. Fred Brown, R-Bryan, has proposed legislation that would combine districts within a county. Passing it this time around is a priority for Brown, a spokesman said.

Marathon could also lose students because it cannot offer the sports and other extracurricular activities or the more varied curriculum that is provided by larger schools. Currently, it shares services like diagnostic testing, speech therapy and support for students with learning disabilities through a network of 11 other districts in the area.

Students at the school are often taught in combined classes; in middle school, fifth and sixth graders and seventh and eighth graders study together. A goal of the Marathon Foundation is to help the school attract enough students to sustain a six-man football team.

But the question remains whether such a tiny school should continue to operate independently. Those who want to see the town survive are adamant that the answer is yes.

“If you drive through Texas, you’ll see cemeteries,” Harrison said. “There used to be a town there. And once they lost their school, it just went away. It would be disastrous for Marathon.”

[Editor's Note: This story has been updated to clarify that when Harrison came aboard as superintendent in 2009, Marathon ISD had repaid the $248,000 in debt.]