This week, we asked our insiders about voter fraud — which was simultaneously being cussed and discussed in the Texas Senate debate over photo voter ID — to see whether they think it's a real problem (14 percent), a political issue (71 percent) or both (16 percent).

Next, we let them play consigliere to Gov. Rick Perry, choosing the items they'd recommend for the "emergency" designation that he has already used for voter ID, sanctuary cities, a call for a balanced federal budget, eminent domain and audio and visual sonograms of fetuses to be seen and heard when their mothers seek abortions. Those five items got between 13 percent and 27 percent support (the insiders were allowed to choose more than one issue). The state budget was the runaway, with 73 percent saying they'd put that on the emergency list. In an open-ended question about what else should be added to the issues up for early consideration by lawmakers, answers included school finance, public education, water, government efficiency, transportation and health care reform. 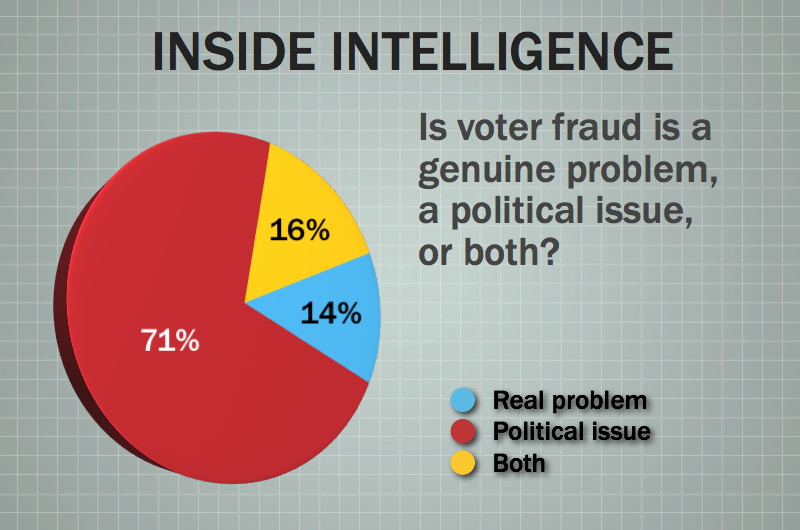 We then asked a question about the whole process — about how emergency items should be used and whether the Legislature should need the governor's designation to consider issues during the session's first 60 days. The full set of answers is attached, but here's a sampling:

• "Legislative emergencies should be used for true emergencies, not the issues the Governor's pollster deems red meat. Also, answers to your first question will skew the voter ID debate - many believe voter fraud is real, but the only kind of fraud voter ID legislation addresses is voter impersonation at Election Day polling places. That type of fraud has not been shown to be a real issue, despite the AG's best efforts." 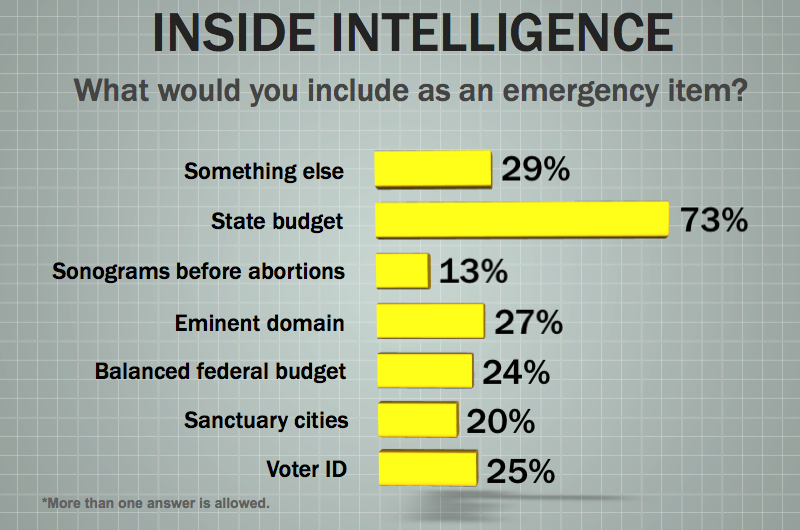 • "Like most of the powers granted the Governor, adding emergency items relies on a responsible and ethical leader. Draw your own conclusions in this case. But this doesn't really call out for a change — it does, however, call out on the press to highlight the non-literal use of 'emergency' by the governor."

• "Yes, the Governor should set an agenda for the state. Doesn't mean he will, but he should."

• "As it is, is a good constitutional balance. Just because a governor gives emergency status, the Lege is not compelled to act."

• "An 'emergency' in the technical sense is just a rule; it is nothing more than a procedure. Any Lege procedure can be used for a political purpose. The Governor has figured out this strategy of using the emergency procedure as a way to make sure his key support groups know that he is delivering on specific campaign promises. Pretty clever of him."

• "The slow walk at the beginning of the session is totally unnecessary and is one of the cause's of the traffic jam in the Last Days. Change it."

• "They should actually be used for state emergencies, but using them to calm the masses and show what the administration sees as a priority is what usually happens. Right now the wrath of the masses is more a political emergency than a state emergency."

• "We have enough laws, why make it easier to pass more?"

• "Should be used to focus legislative attention on a few critical or political issues before the calendar gets crowded. Emergency tags help highlight campaign pledges or respond to bona fide crises. The budget doesn't need to be tagged because it gets legislative attention and will not be completed until session's end anyway."

• "Yes, but not for the Governor to use as a political grandstand. His soap box is tall enough."