What's an inauguration day without a parade of parties? This year's celebration is a more austere event than years past, and funded almost exclusively by private donations, as Texas faces down a budget shortfall that could be as high as $27 billion. But the Wholesale Beer Distributors of Texas — an interest group with plenty of friends at the Capitol — kept up its tradition of hosting invitation-only inauguration parties attended by big names in Texas politics. The celebration for elected officials took place at downtown Austin's Stephen F. Austin Hotel, and a concurrent party for staffers was held in a tent across the street. "It's more in-tents over there," quipped the pun-tastic state Rep. Rob Eissler, R-The Woodlands. (Eissler followed up that pun with this one, when we took a photo together: "We're a focus group ... get it, focus?")

Anticipating this beer party, Tribune reporter Becca Aaronson looked into just how much Texans love the brew. Check out this "bubble" chart of our consumption habits. This is alcohol consumption measured in gallons:

Per Capita Alcohol Consumption in Texas 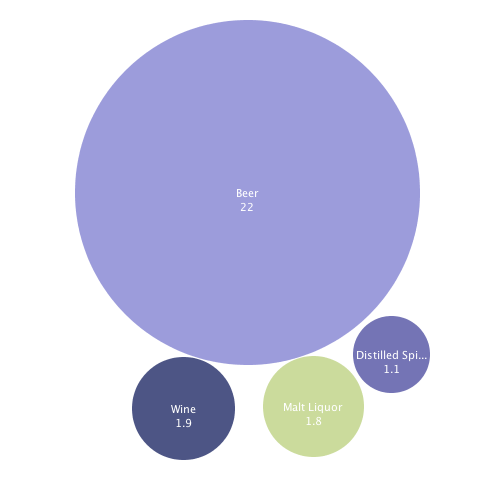