The 82nd legislative session began three days after the shootings in Arizona with a lopsided but vitriolic race for speaker in a Texas Capitol that, for the first time, has armed troopers and airport-style security checkpoints at every public entrance. So this week we asked about the bunker mentality — whether it's appropriate, who ought to be protected on a regular basis and whether a concealed handgun permit should be the fast pass for the seat of state government. 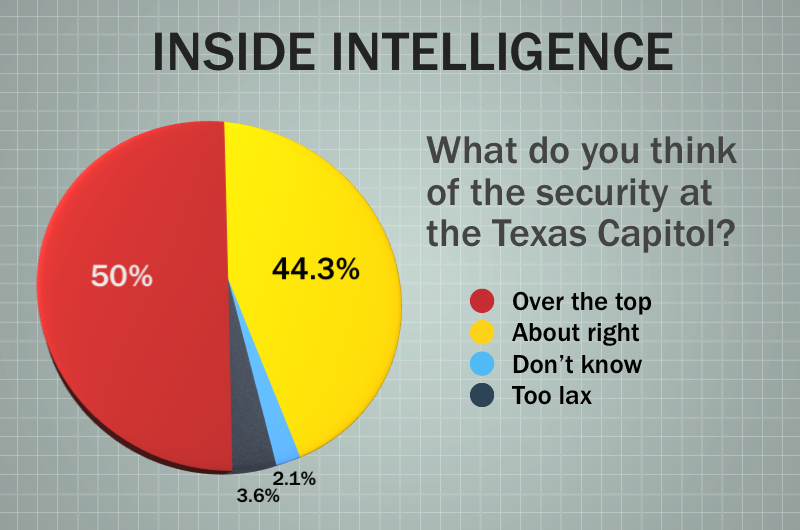 Very few think security at the Capitol is too lax, with 44.3 percent saying it's about right and 50 percent saying it's "over the top." While concealed-handgun licenses can be used as "fast passes" at the Capitol, allowing holders to skip the scanners and X-ray machines, 82.1 percent of our insiders think there should be a similar alternative for people who don't have gun permits. As for whether state officials ought to have security details — as the governor, lieutenant governor, speaker and attorney general already do — the answer depended on the office: 81 percent think the governor should have a detail, 49 percent agreed for the speaker and lieutenant governor, 25 percent for the attorney general and 9 percent for all statewide officials and judges. Eleven percent said none of those officials should get special protection. 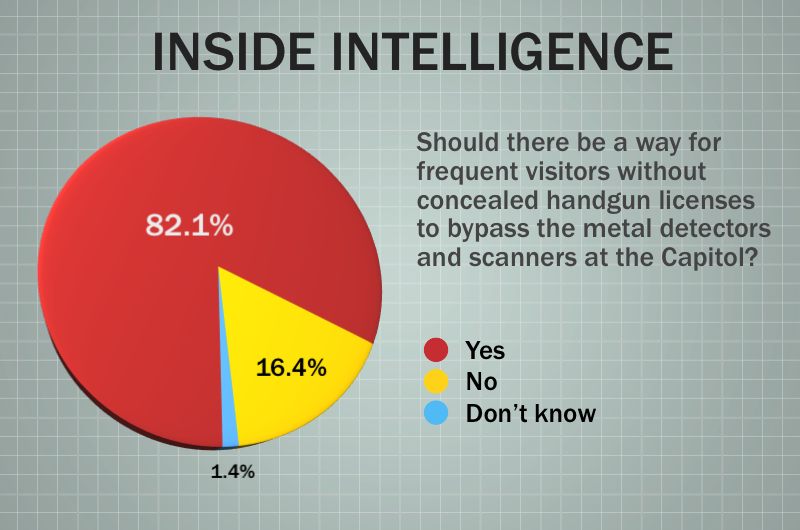 Our open question this week: "Capitol security is a response to real and perceived threats of violence to public officials and others. To what extent do political rhetoric and the current political atmosphere feed that kind of violence and fear?" Here are a few of the insiders' answers (the full set is attached):

• "We have fought two wars in this country because of heated political rhetoric, e.g., 'Common Sense,' the Declaration of Independence, and the seditious screeds before the Civil War. Are we really supposed to believe that cable news is making us all murderous?" 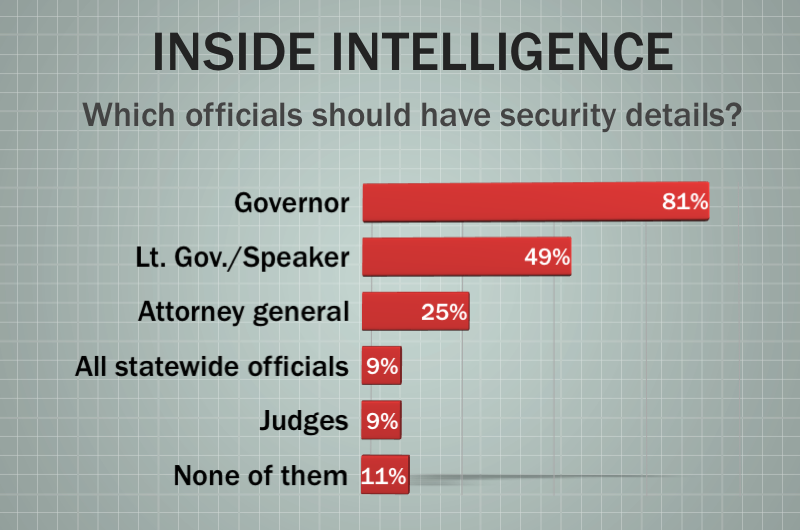 • "Tons. We always overreach in these situations."

• "My answer has changed since last Saturday. I do believe that Capitol Security is now a bigger issue."

• "We managed to get through reconstruction, the Depression, civil rights, and Viet Nam without metal detectors. Some folks just want to carry guns everywhere and all this rhetoric lets them do that."

• "There is a strong evidence that the two are linked. At the tea party rally on Monday, some speakers railed against the 'tyranny of government' even while the Legislature was preparing for the peaceful transfer of power -- it wasn't like Jim Dunnam was barricaded in his office with semiautomatic weapons refusing to leave office. There can be no tyranny if the people can vote in free elections and the results of those elections are honored by all participants. The tea party is the militia movement of the 21st century and to think otherwise is naive."

• "Hugely. The situation has gotten ridiculous. And all the 'security' in the world is not going to protect us from the one deranged individual who slips by or has a concealed weapon permit. Speaking of which, it is monstrous for the state to give priority Capitol access to people with concealed weapons permits without making an alternative certification available to those who can't afford the weapon permit or who object to it (like pacifists)."

• "Hate speech and anger isn't healthy for society, but it isn't the reason crazy people do crazy things."

• "I think the political atmosphere could play a part in some cases, but in general this is something that has always been in the air. I mean, an anarchist shot Garfield in 1881, right? Crazy people will find a way."

• "Political rhetoric definitely feeds fear and is intended to raise anger to a level where people believe they must 'take action.' It probably leads to more threats of violence than actual acts of violence, but since you cannot predict which threats will be carried out, precautionary measures become necessary. However, allowing people who have a handgun license to slip through an expedited line makes a mockery of 'security' at the Capitol."

• "The media is filled with extremist messages that is meant to provoke, anger, enrage and incite. History tells us that the use of this language by political 'leaders', organizers and folks who have both a microphone and an audience only exacerbates the tensions and feeds the divisiveness in our society."

• "Present political rhetoric is no more vitriolic than it was 10 or 100 years ago. It's a red herring."