Texas may be reddening, but Dallas County’s turning a darker shade of blue.

Driven by a growing black middle class expanding into the southern suburbs — which heads to the polls with a penchant for straight-ticket voting — Dallas County’s leadership is becoming more Democratic. That’s despite the GOP’s pickup of some hotly contested Dallas-area state House seats in November, an election in which Democrats failed to nab high-profile county posts in urban Harris and Bexar counties.

Voters in the reddest precincts still turned out in strong numbers, stealing back seats in both Mesquite and North Dallas that slid blue in 2008 when Barack Obama was atop the ballot. Conservative voters also helped Republican state Reps. Linda Harper-Brown of Irving and Joe Driver of Garland cling to their seats despite ethics scandals — contributing to the state’s Republican sweep.

But Dallas Democrats also turned out strong in November; the county voted for gubernatorial challenger Bill White over Republican incumbent Rick Perry by a margin of 12 percentage points. And more of them pulled the straight-ticket lever, helping Dallas District Attorney Craig Watkins cling to his office in a squeaker, and giving the County Commissioners Court its first Democratic majority in nearly 30 years. 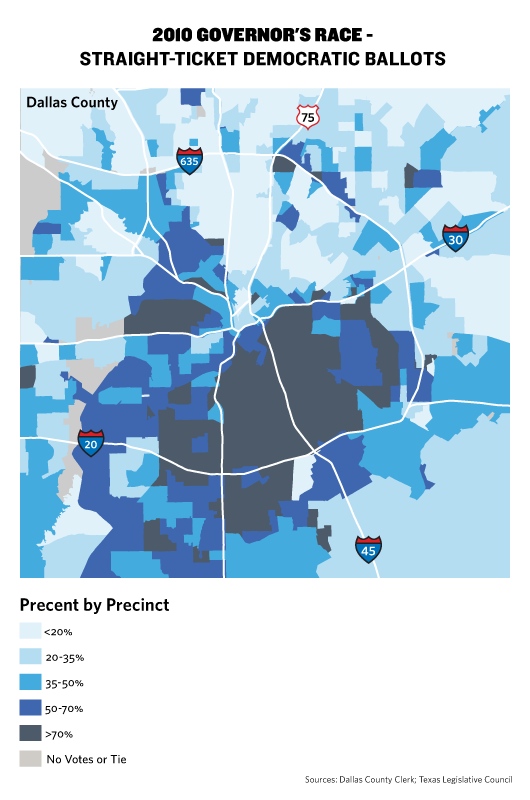 Given how badly Perry lost in Dallas County, and how much Republicans were outnumbered in straight-ticket voting, Dallas County GOP Chairman Jonathan Neerman said it’s a testament to his party that so many of the region’s House seats went red. Republicans Stefani Carter and Cindy Burkett defeated Democratic Reps. Carol Kent and Robert Miklos, respectively, in races most considered to be toss-ups.

“These House races, all the wins we had there, show the Republican Party is still alive and well in Dallas County,” Neerman said. “We lost the county because of the vote south of the Trinity River. And it’s because of straight-ticket voting.”

Indeed, the biggest pocket of Democratic straight ticket voting came from predominantly African-American precincts in South Dallas and the southern Dallas County suburbs — cities such as Desoto, Lancaster and Duncanville, with growing populations of middle-class blacks.

Democrats knew they had the raw numbers out there, said Clay Jenkins, Dallas’ newly elected Democratic county judge. But they needed to be able to turn out the vote. In the months leading up to the November election, Jenkins said, his campaign and others up and down the ballot poured their energy into Dallas’ southern suburbs, emphasizing the high school dropout rate and economic development south of the Trinity.

“From the first day of early voting until the election was over, we walked every house that had a voter. We knocked on doors twice. We called every house and aggressively mailed,” Jenkins said. “And we outperformed in those precincts.”

With the addition of Jenkins, who defeated Republican Wade Emmert, and former Dallas Mayor Pro Tem Elba Garcia, a Democrat who replaces Republican Commissioner Kenneth Mayfield, county government has a strong Democratic majority — which could signal an end to the political strife that has plagued it in recent years. Democrats “own it,” Neerman said, “and it’s now their government to either lead or to fail.”

Still, Republicans are hardly considering Dallas County a lost cause. Neerman said the strategy for the Dallas GOP is not to try to get Southern Dallas straight-ticket voters to split their ticket, which he called an impenetrable “fortress,” but to recruit new voters who are independent or lean Republican.

“We’re better off spending our resources activating new voters in Republican-leaning precincts,” he said — then seeking out strong, capable candidates up and down the ballot.