Insiders split down the middle this week when asked whether lawmakers ought to be paid full-time salaries instead of the $600 per month they make now. The piece divided carefully: 48 percent favor paying lawmakers a full salary, while 51 percent would leave things as they are (the other 1 percent was undecided).

Two-thirds believe officeholders should be required to disclose more details about their personal income and assets than they do now. That's been in the news, with state Rep. Kino Flores, D-Palmview, set for sentencing next week on convictions related to his financial disclosures. Only 30 percent of insiders say current disclosure laws are enough. 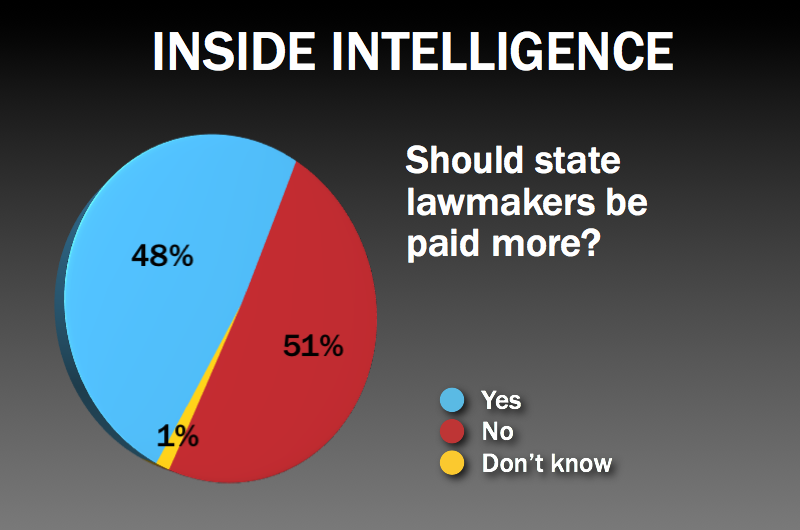 Their comments were pretty interesting. We got responses from 156 people this week, and they jumped right into the open question, which went like this: "Several Texas lawmakers have been in trouble in recent months over issues related to personal income and ethics — using their public positions for personal gain. Should state law be changed to make that harder to get away with, or to make it less attractive in the first place?" The full set of answers is attached, but here's a sampling:

• "In theory, yes. However, I don't trust this incoming legislature to be able to pass legislation to address the issue, so it should be left for a saner time." 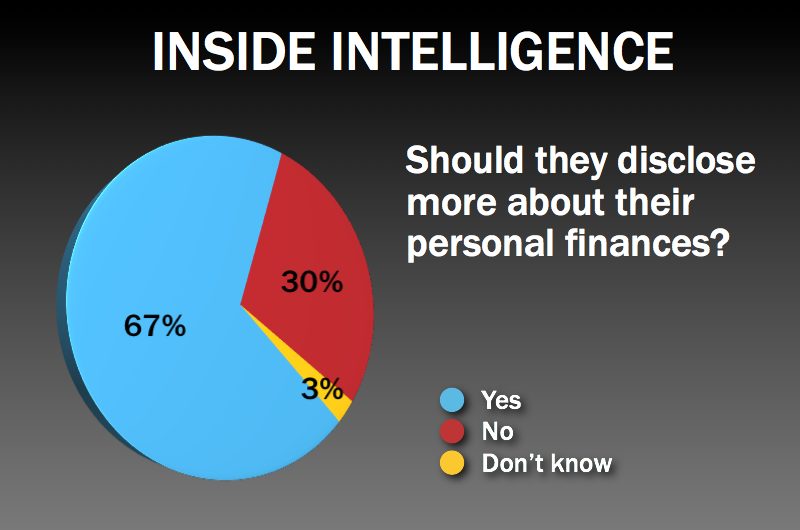 • "There needs to maximum transparency and significant penalties. Too many people now believe that all politicians are corrupt and that has to change if we are ever going to restore faith in government."

• "We need to have full-time salaries and tougher disclosure laws on income outside the legislature. Otherwise we will continue to have bought members as we have for over a century."

• "Let's face it, being a Texas legislator is a full-time job. It is hard to make a living and be in the legislature. This leads officials to cut ethical corners. So, we should pay them properly and demand full and complete disclosure. No more loopholes, no more gimmicks."

• "Changed to what? The same problems exist in every legislative body, from Congress to the local city council. It's called "human nature." I'm still trying to figure out how it is that legislators only make $600/month, yet I've rarely seen one leave the Capitol poorer than when he came in..."

• "No. We already have provisions to deter conversion to personal use. And campaign researchers still need them to make these dumb decisions so we have something to use against them when they run for reelection."

• "Pay should be increased, not so much so as to get away from the citizen legislator, but enough to warrant a more stringent reporting of political activities and to ensure separation of business and state interests."

• "Generally yes, but it depends on the proposal. Establishing a penalty of capital punishment would make it less attractive. Not sure that is a good idea."

• "I have always felt that there is too much emphasis on minor reporting mistakes and not enough emphasis on how legislators make their money. I think Title Companies and local consulting contracts are a current area of concern."

• "I think we're between a rock and a hard place on this issue. We're stuck between this 1700's nostalgia about citizen legislators and 2010's reality about what is required to guide this state through a budget shortfall and toward 40 million people. If increased scrutiny discourages potential officeholders, then we didn't need them to start with. "

• "How they can get away with representing a client in front of a state agency is beyond me."

• "I'd like to make the radical suggestion that current laws be enforced."