State finance people are not kicking out much information, but insiders think the budget shortfall next year will be in excess of $15 billion. Two-thirds of them think it'll be more than $20 billion.

The latest Texas Weekly/Texas Tribune Inside Intelligence survey asked budget questions. How big is the problem? How do you think the Legislature will balance the budget? And what do you think they'll cut? The short answers: It's big. With cuts and the Rainy Day Fund. Education and health care programs are in for a tough session.

Our non-scientific weekly survey aims to find out what the insiders are thinking. Our list includes lobbyists, former officeholders, political consultants and others, and 163 of them responded this week. Virtually everyone thinks cuts will be the first response to the budget shortfall. Only 45 percent think taxes or fees will be raised by the next Legislature, and only 23 percent think lawmakers will approve gambling to help with the shortfall. 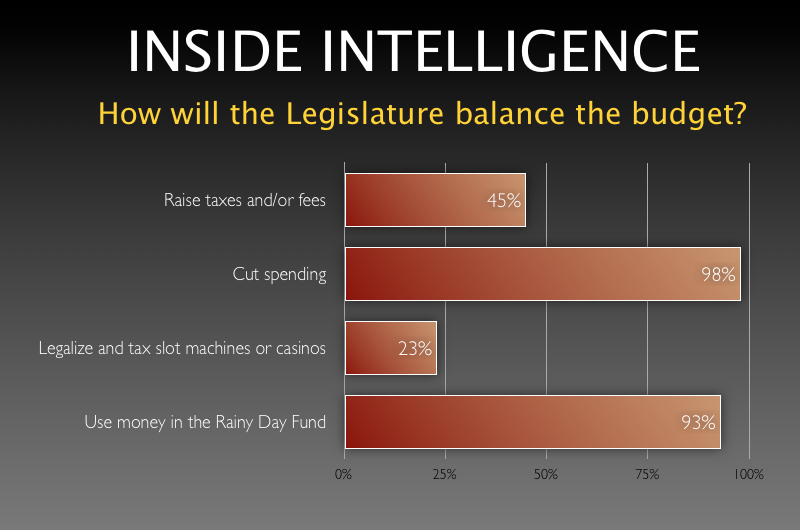 They had some ideas about what else might go into it, including, "bunch of fees, not taxes," "accounting tricks (delay payments, etc.)," "shift benefit costs to employees" and "force local school districts to raise local property taxes to maintain current funding levels."

Ask them what's in for cuts and the short answer is "everything." Higher education looks, to insiders, to be the starting place; 95 percent expect cuts there. Medicaid is on the list for 83 percent of the insiders, followed by children's health insurance, public education, the governor's economic development funds, prisons and highways, in that order. Given a chance to suggest, they added: "agency consolidation ... staff reductions," "everything will be cut," "consolidation of agencies, introduction of innovative financing for projects and privatization of services," and "10 percent workforce attrition reduction in all agencies." 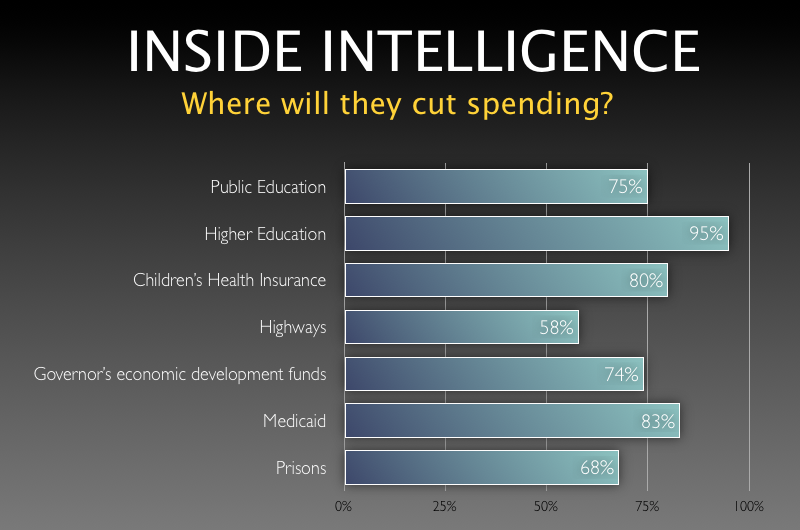 The answers to the last question — "How do you think the budget will play out, both politically and as policy?" — were even more detailed. A sampling (the complete answers, along with the names of this week's participants, can be found here):

• "If they make the right, tough decisions, the lawmakers will be unpopular. But they will have done what's right for the state."

• "I believe that while most onlookers think legalized casino gambling is on life support, ultimately the fiscal hawks that were elected will use it to close the remaining $1-2B shortfall."

• "The enormity of a $25 billion shortfall is staggering. The upcoming session will fundamentally change government as we know it ... the political fallout from cuts to higher ed and public ed could be devastating to the R's over the next five years."

• "Lots of screaming by CPPP [Center for Public Policy Priorities] and allied groups. Small Medicaid rate cuts. RIF of state employees. Early out option for some soon to be state retirees"

• "Perry presidential campaign would love to veto a tax bill. In 1999 Bush didn't want any special sessions so he could campaign. I think Perry will feel that way also."

*"I think it will be very ugly. Lots of name-calling and attempts at guilt trips. The true statespersons will be those who do not take absolute positions on rainy day, spending or revenue."

• "Politically: one or two special sessions, and everyone unhappy with the results. Tea Party, unhappy cuts weren't deeper. Dems, unhappy for the huge loss of services. Moderates, unhappy about the long-term impact on our state. Freshman House members, in treatment for PTSD."

• "Very painfully. Watch for ALEC [American Legislative Exchange Council] influence — the biggest pressure from the majority party will be in areas where privatization is realistically possible, incl roads, schools, and prisons."

• "The Republicans have used such strong rhetoric about government that they have no choice but to pass draconian cuts and there will be a political price to pay when the effects of those cuts are felt at the local level. The last election was all about national politics — if the Democrats message right, the next one will be all local."

• "A lose-lose for those in the majority party. No one wants higher taxes and no one will be happy with the required cuts."