Taxpayers, mark your history books: 2010 was the year the Texas Senate embraced e-mail and saved $490,000 in postage. In total, the upper chamber saved nearly 6 percent in administrative expenses in fiscal year 2010 ($15.1 million) compared to fiscal year 2009 ($15.93 million), according to data provided by the Secretary of the Senate and analyzed by The Texas Tribune. Major cutbacks were also made in printing ($75,000) and payroll ($410,000).

A closer look at the budgets of big spenders confirms the trends. Sen. Rodney Ellis, D-Houston, was the top Senate spender in 2009 and 2010, but he reduced his expenditures this year by more than $60,000, chopping $40,000 in postage and printing and another $20,000 from payroll.

"In light of the tough fiscal climate facing our state, Senate offices were asked to cut their budgets by 5 percent,” Ellis said via e-mail. “As a result, I forewent publishing a legislative newsletter — which keeps my constituents abreast of important state issues and helps them interface with state government — and cut two critical staff positions.” 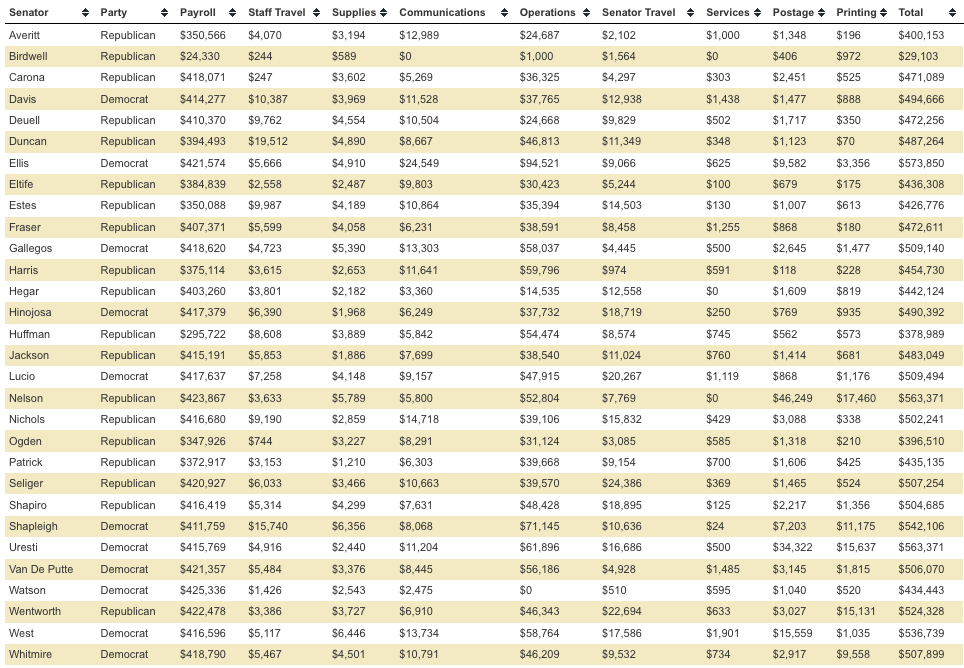 by Becca Aaronson and Ryan Murphy

Every legislative session, the Senate collectively decides how much each senator can spend on administrative items. In 2009, all but three of the 31 senators spent more than their $450,000 allotment. Although only nine senators spent less than the 2009 allotment in 2010, overall spending still dropped by more than 5 percent.

The state senator representing the largest geographic district in the country — covering 55,000 square miles from San Antonio to El Paso — says it's a challenge to balance the costs of traveling around his district and maintaining staff.

“We had to combine some of our positions in order to absorb those cuts,” says Carlos Uresti, D-San Antonio. After three high-level staffers left his office last year, Uresti waited as long as possible to fill the positions. Now, he says, one staffer serves as both general counsel and chief of staff.

In response to the request for budget cuts, senators decided to send just one newsletter per biennium instead of one per month to save money on postage and printing. Average spending on postage per senator fell from $22,000 in 2009 to $6,000 this year. Only three senators spent more than $30,000 on postage in 2010: Nelson, Uresti and Tommy Williams, R-The Woodlands.

“We had the highest distribution count because we represent such a populated district," Nelson says.

Uresti says he is planning to forgo a newsletter in fiscal year 2011 to keep his costs down. “Unfortunately, we won't be able to communicate as effectively as I’d like to,” he says. “One stamp is expensive.” To stay in touch with constituents, Uresti sends out a monthly e-newsletter and uses money from his campaign to keep his database updated.

State Sen. Joan Huffman, R-Houston, had the lowest expenditures of the 31 senators (excluding State Sen. Brian Birdwell, R-Granbury, who was in office less than two months of fiscal year 2010). Huffman says her spending on postage is "right in line" with other senators. She recently sent out her newsletter and says those costs will be included in her fiscal year 2011 filing.

With an estimated budget shortfall between $12 billion and $25 billion, giving up stamps, newsletters and office staff won’t be the only cuts senators will have to make in the upcoming legislative session. “Just like other agencies in the state are going to have to cut corners, we’re going to have to do the same in the Senate,” Huffman says.