The Tribune will be chock full of interactives and constantly updated content on Election Night, so we thought we'd give you a quick guide to our best resources throughout the evening.

The big changeover to our election night mode will happen at 7 p.m. CDT, when most of the polls close around the state. And a lot of our features will be free and fully embeddable for our news partners and for you bloggers out there. 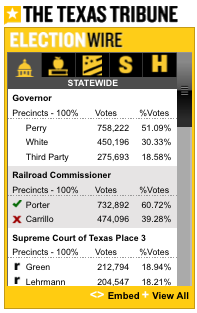 This live feed is updated in real time straight from the secretary of state's office. Check it to see the results and percentage of votes counted in each statewide race and in all the hottest Texas House races down the ballot.

We'll launch the live blog this afternoon with photos and updates from our reporters in the field. We'll be at the party for Rick Perry and the GOP statewides, at Harris County polling places, at Bill White's party, at the Tribune's own downtown Austin anniversary and election watch party, at the Travis County Democratic Party's watch party and wherever there's a hot race to be decided. Send in photos to multimedia@texastribune.org if you see any action out there across Texas.

After the polls close, we'll launch a ticker across the top of the page that will stream live Twitter updates from our reporters.

We're all over the broadcast channels. Watch Tribune CEO/Editor-in-Chief Evan Smith on C-SPAN sometime during its election night extravaganza, or tune into Houston's KHOU-TV and Austin's KXAN-TV for live updates from yours truly on the balance of power in the Texas House and what's happening in the Twitterverse. We'll be live during KXAN's 9 p.m. and 10 p.m. newscasts and live in Houston on its digital channel between 7 p.m. and 9 p.m.

As for the radio airwaves, tune into our partner station, Austin's KUT (90.5 FM), between 8 p.m. and 11 p.m. to hear Trib reporters Brandi Grissom, Ross Ramsey and Matt Stiles offer their analysis as the results stream in.

We've designed an application that will update the shifting majority/minority numbers in the Texas House as races get called throughout the evening. We'll start it at zero, and you can watch the little gray chairs fill in as races are called for Republican or Democratic candidates.

As we did for the primary, our election page will feature maps that allow you to roll your cursor over each county to see the results of statewide races as they're updated.