So much for limited government.

The volume of bills and resolutions considered — and passed — in the Texas Capitol has increased significantly in recent years, with lawmakers of both parties handling many more pieces of legislation than they did two decades ago.

Legislative filings increased in the Texas House and Senate by 70 percent from 1991 to 2009, records show, and the number of bills and resolutions passed by both chambers climbed at a slightly higher rate — both of which exceeded the state’s population growth during the same period. (View an interactive graphic to explore the trends).

Experts suggest that many factors fuel the steady increase, including technological improvements. The trend also leads some to question whether all the extra legislation is necessary — and whether it might strain the abilities of part-time lawmakers who only meet for 140 days biennially. The cumulative effect on the public good remains difficult to parse, but many insiders agree that the crush of lawmaking reduces time for debate or even deliberation before votes, though it does have the effect of forcing lawmakers to prioritize. “When you choke the system like this, in-depth research on what the bill does and its impact goes out the window,” says Andy Fish, whose company, Texas Legislative Service, tracks bills, votes and meetings in detail for customers that include lawmakers, lobbyists and journalists.

The rise in legislation may amount to simply too much government, worries Talmadge Heflin, a retired state representative and former chairman of the powerful House Appropriations Committee who is now director of the Texas Public Policy Foundation's Center for Fiscal Policy. “One of the alarming figures is certainly the additional bills filed, but also the higher percent that are being passed,” he says. “That makes me wonder whether legislators are scrutinizing legislation as thoroughly as they should.”

Fish believes lawmakers can’t sustain continued increases with their current resources. “The Legislature is pretty much at its capacity in terms the number of bills it can pass,” he says. “There is not enough bandwidth there.”

Texas House resolutions filed from 1991 to 2009. View an interactive.

The fastest-growing form of legislation is the simple resolution: the non-binding, often ceremonial measure that congratulates local officials or constituents. Those filings have increased by 185 percent in the House since 1991, and increased by 60 percent in the Senate during that time.

Lawmakers last session, for example, filed bills praising a state-champion football team, the retirement of Department of Public Safety officials and the 100th birthday of a San Antonio woman. The Legislature passed about 4,000 such bills — more than half of all legislation.

But traditional bills — the vehicle most often used to change state policy or legislation or devote taxes to services — also are on the rise. The number of filed bills in the House and Senate has increased roughly 60 percent since 1991. Those who know the process say part of that increase comes from a rise in the number of noncontroversial bills that only affect specific areas of the state and thereby don't draw much objection from other lawmakers.

“You’re seeing a lot more local bills or bills that are agreed to that have no opposition,” said state Rep. Burt Solomons, R-Carrollton, who chairs the House State Affairs Committee, which considers many of the more consequential bills each session. “You’ve got a number of things back home that need things done statutorily.” 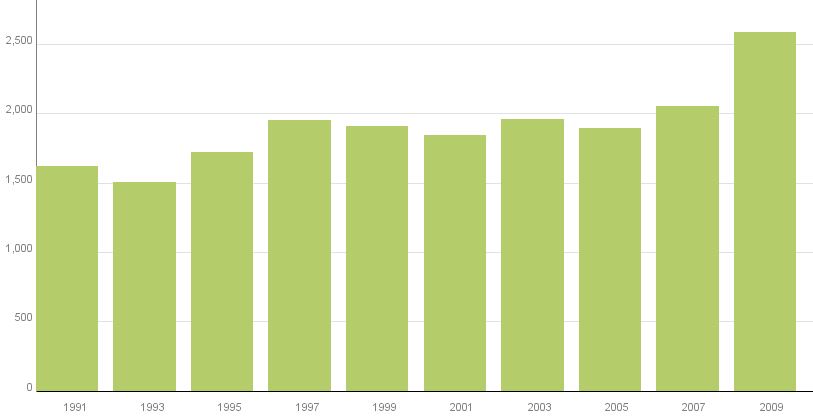 It's unclear whether the trends will continue next session, with the prospect of a multibillion-dollar budget shortfall and the thorny decennial process of redrawing members’ political districts to reflect the U.S. census. In past sessions with austere budget climates, lawmakers filed and passed fewer bills. In 2003, when lawmakers tackled a $10 billion shortfall, about 20 percent fewer House bills made it out of both chambers than in 2001. Senators saw their success rates drop by 8 percent over the previous session, records show.

“There is such a dramatic budget issue to deal with [next year],” says Steve Collins, a former chief legislative counsel and executive director at the Texas Legislative Council, which assists lawmakers with bill drafting and redistricting. “Almost everything costs money, so how do you pass bills if there’s no money?”

Collins, who now works for the University of Texas System, started at the legislative council in 1976, when bills were drafted on typewriters and by the 1980s on a mainframe word processor. He doesn't believe that the migration to personal computers, which became widely available in the early 1990s, changed bill production that much and likely isn't responsible for the increase in legislation. But he says the internet has made it easier for lawmakers and staffers to research issues and propose legislation.

Experts also say other factors contribute to the trend. For example, the state faces a number of challenges on major issues, such as school financing, transportation, criminal justice and education, and lawmakers want constituents to know they’re trying to address them. They also know that voters — and potential opponents — can track legislative work more easily now over the web.

“It’s either the politics of it, or that member was, indeed, interested in that topic,” says state Rep. Jim Dunnam, D-Waco, a leader among the House Democrats. “When you get to thinking about it, that’s probably what people campaigned on.”