Given a choice between spending cuts and revenue increases to balance the state budget, Texans lean solidly toward cuts, according to the latest University of Texas/Texas Tribune poll.

Lawmakers are looking at a shortfall of up to $21 billion in the next biennium — a problem that will force them to find new revenue, spend less money or some combination. Overall, 47 percent of those polled say spending cuts are the way to go, while 24 percent say the state should balance the budget with new money; 19 percent fall right in the middle. But while they're opposed to new taxes and other revenue increases, a majority of Texans want to protect the two biggest programs in the state budget. And they want to increase spending on one that's very much in the news.

"It encapsulates the dilemma we find ourselves in," says James Henson, a professor of government at the University of Texas who oversees the UT/Tribune poll with his colleague Daron Shaw. "This sends a grim message to the Legislature and offers [a lawmaker] no obvious solutions as to what will please his constituents." 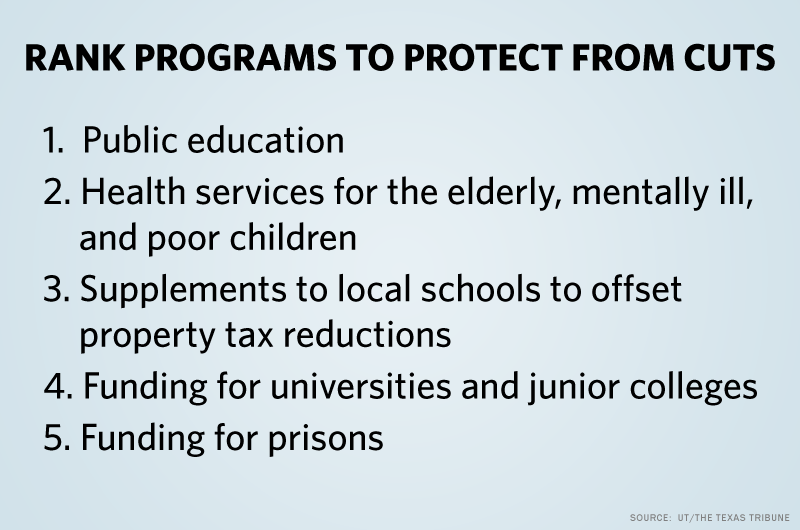 The saving grace is that the budget isn't high on the list of voter concerns right now. It's a top issue for only 2 percent of the electorate — way behind state issues like border security, immigration, unemployment/jobs and the economy.

"People have not thought about it yet," Henson says, calling the poll more a reflection of conventional wisdom than the result of an engaged public debate. "The public may be open to leadership here if it can be found."

Should anything be protected while they're cutting? Given five items to rank, aid to public schools is the top priority, followed by health services for the elderly, the mentally ill and poor children; supplements to local school districts to offset property tax reductions; funding for universities and junior colleges; and funding for prisons. The first two items were ranked first or second by more than half of respondents; they're also the two biggest items in the state budget, and protecting those from cuts would constrain the choices lawmakers have ahead of them. 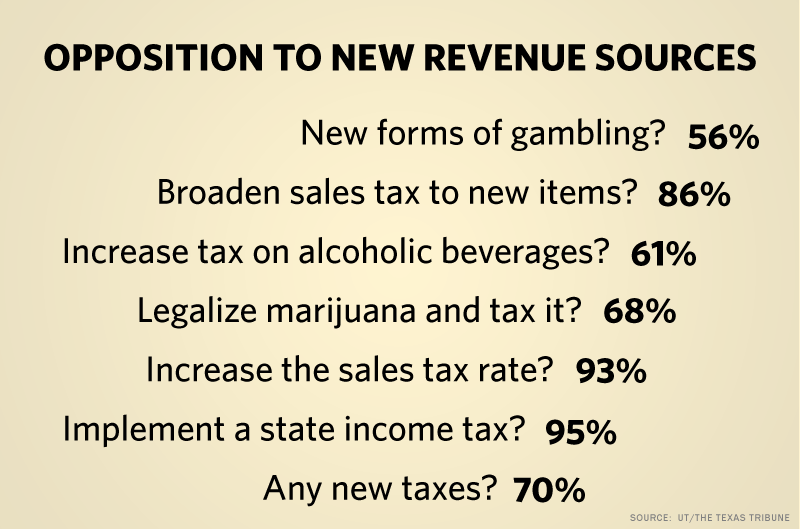 Some politicians and others have argued that even in a tight budget year, certain programs ought to get more attention and money. More than half — 56 percent — say they would support increased funding for border security. But they're opposed to higher funding for community colleges (73 percent), pre-kindergarten programs (72 percent), nursing homes (68 percent) and increased exemptions from the business franchise tax (78 percent).

Where would new money come from? Seven in 10 say they don't support any new taxes at all to close the budget gap. The only increase that's even close to acceptable to voters is new forms of gambling, and only 44 percent agree that that's a good way to generate state revenue. They emphatically don't want to broaden the sales tax to include items that aren't taxed now; 86 percent would oppose such a move. Increasing the state sales tax on current items is even more unpopular — 93 percent oppose that. Levying higher taxes on alcoholic beverages is unpopular with 61 percent of respondents. How about legalizing marijuana and taxing that? No, say 68 percent. And the most unpopular idea of all? Ninety-five percent oppose a state tax on personal income.

"To the extent that anything moves the needle here, it's sin taxes," Henson says. But there's nothing here to encourage financial foragers: "When it comes to revenue, there are no real surprises."

The word "tax" itself might be the pox here: In the May 2010 UT/Tribune poll, 42 percent said they were open to the idea of legalizing marijuana and another 27 percent said it should be legal for medicinal purposes. As for additional gaming, our February 2010 poll found only 10 percent of Texas absolutely oppose it, while 40 percent would support legalizing casinos, 13 percent more would allow expanded gaming in existing locales, and 6 percent would allow expansion only on Native American reservations. Both issues got a better reception when they weren't coupled with budget and tax questions.

This is the fourth University of Texas/Texas Tribune poll (the three others are here, here and here). The survey of 800 registered voters was taken Sept. 3-8 and has a margin of error of +/- 3.46 percent.