Like in January, we've created per-capita maps to visualize campaign donations given in the governor's race. Such maps can help journalists spot trends — but also they're just interesting eye candy.

This time around, we looked at donations given to Republican Gov. Rick Perry and his challenger, Democrat Bill White, and then summed their totals by city. On the map, we compared each city's donation total with it's population — a methodology that visualizes donation rates, rather than overall donation totals, which would essentially display a population map.

Perry's map, in Republican red, shows that he received disproportionately large donations from tiny Dallas-Fort Worth suburbs like Westlake, Argyle and Heath, as you can see by the cluster of bubble symbols in that region. There were also relatively large donations in a few panhandle towns as well. The largest Central Texas symbol reflects the $138,000 given to Perry by Blanco resident Peter Holt, a wealthy businessman who owns the San Antonio Spurs. Here's the map: UPDATED: And here is the map with both candidates' totals (thanks, Robert Dahnke, for suggesting the transparency). 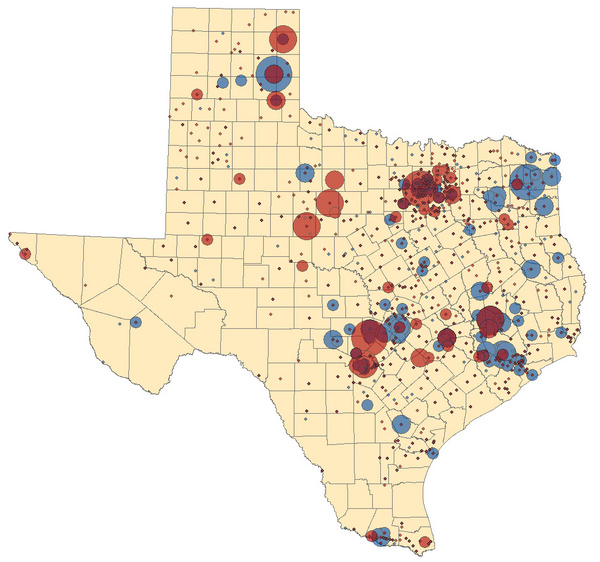 Let us know if you have ideas for other maps, and follow @TribData on Twitter for updates.